A key contributor for 50 years 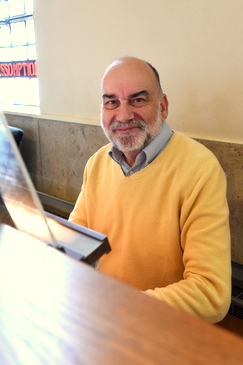 If you’re looking for Jeffrey Quinn on a Saturday afternoon or Sunday morning, you’ll most likely find him behind a keyboard at Notre Dame de Lourdes Church in Skowhegan.  Quinn has been the organist there for 50 years and the choir director for nearly as long.  It’s something he has never lost his passion for doing.

“Why do I love to do it?  I’m not very good at telling you why. I just love doing it,” he says. “I cannot explain it, but I can tell you that I am where I am supposed to be.”

Quinn, who is from Cornville, began playing at the church on October 4, 1969, and has rarely taken a weekend off since.  The number is so few, they can recall most of them.

“That was a good reason, and the weekend we got married,” Jeff says.

Jeff has played when he has been ill and when wintry conditions kept many at home.

“We went there one time with the kids and the jeep, and it was glare ice. We had four-wheel drive, and we’re going 10 mph,” Jeff recalls.

Vacations begin after Mass on Sunday and finish by Saturday afternoon.

“My kids were very flexible, because they just knew,” Jeff says.

Jeff started taking piano lessons when he was seven years old, expressing gratitude to his teacher, Marion Knight, for her early influence.

“She was never demeaning or anything. It was always encouraging,” he says.

In high school, he and some friends formed a dance band named the Ideals, and that is when he first picked up the organ.

“They were just coming out with portable organs, and one of the kids who was in the band with me, his father owned a music store in Skowhegan, and they sold those organs,” he says. “My parents bought me one for Christmas when I was probably a sophomore or junior in high school, and I used to play that with the band.”

His piano teacher, who was a church organist, taught him to play.

When he was still in high school, Jeff played the organ for his brother’s wedding at Notre Dame.  Two weeks later, a couple who attended the Mass asked him if he would play at their ceremony. 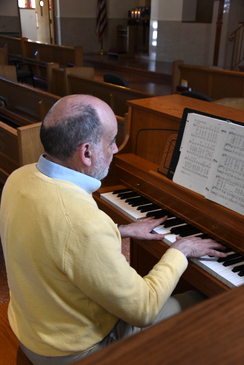 While he has never mastered playing by ear, Jeff has always been very good at sight reading.

After graduation, the church was awaiting the arrival of a new organist, leading the priest to ask Jeff’s father if he could fill in.  He remembers his mother being opposed to the idea, fearing it would interfere with his college education at age 18, Jeff did start playing, making the one hour and ten-minute drive up and back to the University of Maine at Orono each weekend.

“We would have choir rehearsals on Sunday night because I could be there, and then, I would go back to college,” he says.

He admits to some early nerves but credits two women for helping him out: Ernestine Pooler, who sang in the choir and made him feel welcome, and Annette McGowan, who became the choir director.

It was a time of change for liturgical music with Vatican II opening the door to participation by the congregation. As a result, Jeff says the repertoire was extremely limited.

“There was just a handful of music available for congregational singing,” he recalls. “It was new for everybody.”

At first, the priest planned all the music.  Jeff’s job was just to play it, something he was perfectly happy doing.

He remembers one particular workshop held in Lewiston, the first time Jeff had seen a piano in a Catholic church.  Prior to Vatican II, the only instrumentation was the pipe organ.

“Mass for Joy was the name of the Mass, and it was very jazzy, not by today’s standards but by those at the time. I remember that I was so hyped up. I wanted to come home, and I wanted to change all the music at the church,” he says.

The organist who was supposed to take over at Notre Dame never did, and Jeff continued on.  It became such a part of his life that when he earned his teaching degree and was offered a job in Ashland, 180 miles away, his first thought was, “Well, I can’t come home on the weekend and play at church.”

Even though teaching jobs were scarce at the time, he turned it down.

“I said, ‘I’m not going up there because I have to play at church.’ So, I was that invested in it from the very beginning.”

While Susan became a teacher, Jeff, instead, went to work in his father’s hardware store.

“I worked there for 15 years, and that was great, because if I had to play for a funeral, I was able to leave for an hour,” he says.

Jeff also did some teaching, including teaching music at an elementary school in the town of Harmony a couple days a week and offering piano lessons.

“I’ve always been the stay-at-home dad type.  My schedule was always flexible, so I was the one who would be home when the kids got home,” he says. 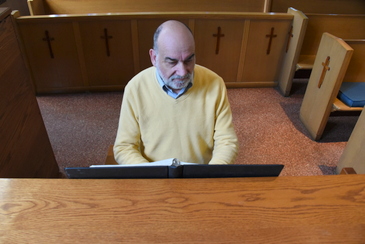 Through his years as organist, Jeff has seen many changes.  In the 1980s, the organ was moved from the choir loft to the front of the church, and a piano was placed next to it, a welcome addition for a man who considers himself a pianist first.

He says there has also been an explosion in the number of available hymns.

“Of course, with all of that, you have people wanting Top 40 music at church, and you have to say no.  There are limits,” he says.

Jeff tries to choose music tied to the Scripture readings. He says he does a lot of call and response, where the choir sings the verses and the congregation the refrain. He says it’s a way to encourage participation in the choir, and it allows him to increase the hymn selections.

“We have a huge repertoire. I’m very proud of what our parish knows, and they actually sing,” he says.

Something that can be attributed to Jeff’s commitment and hard work.

“Psalm 149 tells us to ‘Sing to the Lord a new song, a hymn in the assemble of the faithful.’ Jeff Quinn has been doing this at Notre Dame de Lourdes for the last 50 years,” says Father James Nadeau, pastor of Christ the King Parish of which Notre Dame is a part. “He has been part of the liturgical renewal over the last five decades from Gregorian chant and folk groups to our current musical repertoire. He has been the conductor of the orchestra. We are truly grateful.”

Jeff stresses the importance of music that enhances the liturgy.

“Just because you’re not performing doesn’t mean you don’t have to be good at it. You have to put your best out there,” he says.

He says one thing he sometimes struggles with is people who don’t share the gifts they’ve been given and don’t make the same commitment he does.

“I don’t understand why other people don’t want to do it.  Why don’t you want to come to choir rehearsal? It’s a blast,” he says. 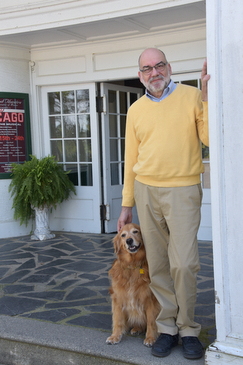 When Jeff isn’t behind the keyboard at Mass, you might find him playing for a show rehearsal or painting a set at the historic Lakewood Theatre in Madison. Jeff and Susan bought the theatre in 1990.

“This has been a wonderful outlet for me and Susan,” he says.

Lakewood had gone bankrupt in 1984, but the following year, Jeff and a friend, who had been putting on shows at a hall in Cornville, rented it to present three shows there.

“The next year, we did four plays, and we never looked back,” Jeff says.

Jeff and Susan brought the theatre, which dates back to 1901, back to life, along with the restaurant across from it. In addition to performances throughout the summer, the theatre also offers the Lakewood Young Performers Camp, a day camp for youths.

While Jeff’s schedule tends to be quite full, he also drives to Waterville and Winslow when an organist is needed for funeral Masses there, and after the Sunday Mass at Notre Dame, he heads to the nearby Episcopal church to play at their services.

Even after 50 years, Jeff hasn’t lost his love for what he is doing. He says he still gets excited when samples of new liturgical music arrive in the mail.

“It’s just like getting a present. I can’t wait to play the CD,” he says.

Asked if he ever thought, back at age 18, that he would still be the church organist 50 years later, he answers, yes.

And although it’s one he has now reached, he doesn’t plan to stop playing.

He says he is counting on his wife to tell him when it’s time to step away.

Fortunately, it looks like Jeff will remain a key contributor for some time to come.