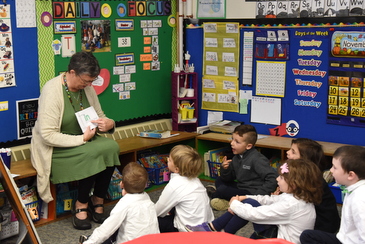 With her kindergarten class gathered on the floor around her, Kathleen Curry shares the Gospel story of the feeding of the 5,000.

“Was it nachos?” she asks the students.

“No way!” they answer in unison.

“Did He have quesadillas?”

“No way!” the students shout out again.

“What did Jesus do?” she asks.

“He shared the food with everybody,” one student quickly answers.

Curry says she tries to incorporate faith into all aspects of her classroom at St. John’s Catholic School in Brunswick, whether she’s teaching religion, language arts, or math. The story of the loaves and fishes is also intended as a lesson about sharing.

“Do you think Jesus was teaching His friends about sharing, love and sharing?” she asks the children.

“We all have to share,” she tells the youngsters. 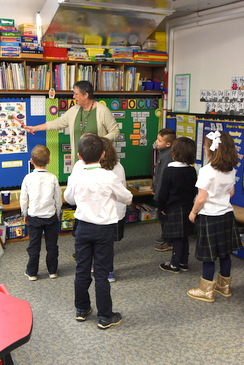 Curry has been teaching kindergarten at St. John’s for nine years, and before that, she taught at the Cathedral School in Portland for 13. She says teaching in a Catholic school is something that feels a part of her.

“It’s a passion, and it’s ministry. It’s more than a career,” she says. “I love learning, and I love passing it on.”

It’s something at which she excels, which is why she was chosen as the winner of the 2019 Maine Catholic School Teacher of the Year Award.

“She is such an outstanding teacher, employee, and steward of God. She understands and values the importance of Catholic education and is always willing to do whatever it takes to make St. John’s better,” says Shelly Wheeler, principal of St. John’s. “She is truly one of a kind.”

“She is gentle and patient in dealing with the kindergarteners, and they really learn,” says Father Joseph Ford, school chaplain. “It’s amazing to watch them from when they start to the end of the year.”

“It is humbling,” Curry says, in reaction to winning the award. “I’m going to get all teary because that is not why I do it. I love kids, and I love teaching.”

Curry describes teaching as a calling.  Even as a child, it’s something she loved to do.  She remembers playing school with her younger brothers and with friends from St. Joseph School in Portland.  Her kindergarten teacher was an early influence.

“I loved my kindergarten teacher. I loved her to death,” she recalls. “I loved staying after with the (Sisters of Mercy) at St. Joseph’s, helping. We would take turns doing bulletin boards.” 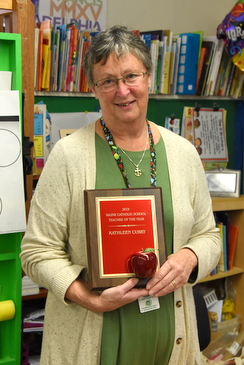 She attended Cathedral High School in Portland and then its successor, Catherine McAuley High School.

“I loved Catherine McAuley. I was active there,” she says. “You have a different relationship with your teachers. I became friends with a lot of them afterwards. I never thought I would have sisters on speed dial, but I do.”

She says Catholic school was a perfect fit for her then, as it is now.

“It just touches your heart. It sets you off on your faith journey, and it gives you great friends. It was a great experience for me. I loved it,” she says.

After getting married, Curry and her husband moved to Maryland, where she worked as an ed tech, assisting students with special needs. After eight years, she moved back to Maine, continuing that work and also teaching kindergarten at a public school in Old Orchard Beach.

That is when Sister Theresa Rand, RSM, who was the principal of Cathedral School, called to say there was an opening.

“It was a special place. I loved it,” she says. “Sister Theresa was a good role model because she is such an advocate for Catholic schools.”

Cathedral School served many students who arrived in Maine as refugees, leading Curry to take courses to earn her English Language Learner Teacher Certification, so she could help children struggling with the language barrier.  That experience was beneficial at St. John’s this year, when it welcomed five students from Spain, none of whom spoke English.

“Mrs. Curry was a great resource for our teachers as we worked to implement a learning plan for students with very little English,” says Wheeler.

Curry says it was heartbreaking when Cathedral School closed in 2011, but it led to her new opportunity at St. John’s. 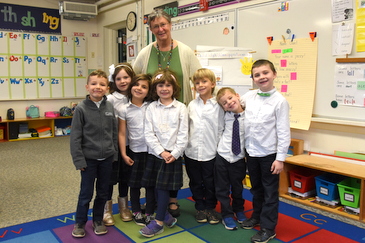 “They’re just sponges. They want to learn, and they’re happy,” she says. “There is such a big growth in between when they come in and when they leave in June. First, they learn how to be students. Then, we start doing more, and then, they become the teachers for their peers. We do a lot of turning and teaching, and they like that,” she says.

Incorporating some of her Cathedral School experiences, she begins each day with a greeting in a different language.

“We start with English. Last month was Spanish, and now it’s French, so it’s Bonjour. ‘Bonjour Eve,’ and then, she would pass it on,” she says.

Curry says excitement bubbles up within her when she sees something she believes will resonate with her students.

“Oh, that looks like fun. I want to try that out. Oh, Tommy will love that.  With Eve’s big heart over there, she is really going to fall for this.”

Curry says she is always ready to try something new, but it’s the kids who determine the direction she takes. 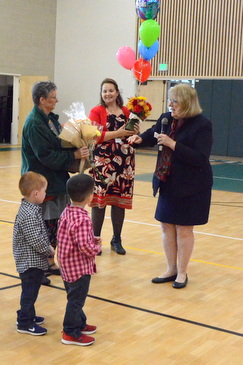 Knowing that children today struggle to sit still for long periods, she builds lessons in 15-minute blocks and incorporates a lot of movement, such as the kinesthetic alphabet, in which reciting the letters is accompanied by sounds and motions.

“They’re hearing. They’re seeing. They’re using their bodies, and that’s what their little brains need to soak it in,” she says.

To promote super readers, she has given children superhero masks to wear and is planning on getting them capes as well.

At the end of each year, she transforms her classroom into an environment inspired by something the kindergarteners learned.

“This group likes animals, so we’re probably going to try to look at something that way.  I’ve done the rainforest twice because everything is hanging down, and there are brightly colored snakes going through them.  The kids just love to show off the room. We did the ocean once, but that’s not as easy,” she explains.

Curry believes one of the most important gifts she can give the children is a love for learning.

"I want them to leave kindergarten loving learning, because if they love to learn, then they’re going to accomplish things when they’re ready,” she says. “They may not be ready to learn now, but if they’re discouraged, they may never be.”

She also loves teaching the children religion, something she recognizes as an awesome responsibility.

“It humbles you to think that you have that much influence over little souls, but I do my best,” she says. 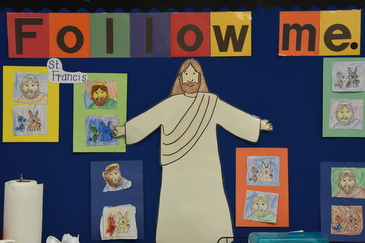 A cutout image of Jesus with the words “Follow me” is displayed prominently in her room.  When the second graders sang at Mass by themselves for the first time, the kindergarteners talked about how it made their own prayer time more special and wrote the older students thank you notes. Curry has also taught her students “Alleluia” in sign language and has had them write their own end-of-the-day prayers.

“I will say to the kids, ‘There will be a day when God will say to you, “Wake up, wake up.” Listen hard because we all have a mission, and we’re just waiting to find out what it is.’”

“One kindergarten student told me that it’s okay to ‘not be good’ at some things. ‘God gave us all different talents, and we sometimes don’t know what our talent is until we’re older. But we have to remain kind, because even if someone isn’t good at something, we know God has big plans for him,’” shares Wheeler. “When I asked this particular student how he knew all of that at such a young age, his response, ‘Mrs. Curry taught us, and it’s true!’”

Curry believes giving children a foundation of faith is more important than ever because families are so busy these days that it sometimes gets lost amid secular activities.

“We need to slow down and think about what is important. I think teaching these kids about faith, and about love, and about Jesus’ love for them is really valuable,” she says. “They need their faith, and it needs to grow in them because there are so many pressures in our world today.”

“She teaches her kindergarten students that God’s love is our foundation and that we must treat and respect people in the way in which God has intended,” says Marianne Pelletier, superintendent of Maine Catholic schools. “The insights her students have been able to gain from her authentic Catholic teachings about the world are amazing.”

Pelletier presented Curry with the Teacher of the Year Award during a school assembly in October, resulting in loud cheers and applause from students, including current kindergarteners, who give her rave reviews. 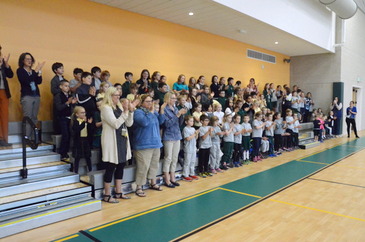 “I like her because I love her,” says Giada.

Sixth and seventh graders, many of whom once had her as a teacher, sang a special tribute to her, while family members, including her twin, four-year-old grandsons, greeted her with flowers and hugs.

“This is well deserved. She’s done this forever, and she loves it,” says Meghan Newman, Curry’s daughter.

“She just loves what she does,” says her husband, Don. “She cares. It’s who she is.”

“It feels great, but wow,” Curry says. “I had no idea whatsoever.”

For winning the award, Curry received a plaque, a $500 cash prize, and an additional $500 for her classroom.  She plans to use the latter to create a gross motor sensory room for students to use. 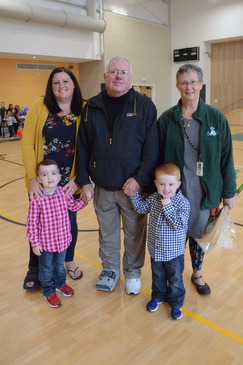 “We could do paths on the floor where the kids would hop this way, so they’re using their crossbody exercises. We could put things on the wall like bubble wrap or things they like to touch,” she says. “We could use it for the whole school when somebody needs a break.”

“I am blessed to have Mrs. Curry on our teaching staff,” she says. “She is truly an amazing gift from God.”

Curry says it is she who feels like she has been given a precious gift.

“It is like a great, big extended family of people whom you become vested in,” she says. “I’m so blessed. We do this out of love. We teach out of love.”