An Unexpected Gift of Life and Love 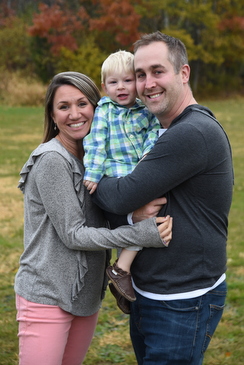 At age 2 ½, Emmitt Tice is a boy bursting with energy.

“He’s such a handful. He is the busiest kid,” says Katina, his mother, laughing. “He is just getting into everything, throwing things constantly, but he is the happiest little guy. He has such a good disposition.”

Beaming with pride, Joshua shares how his son already takes after him.

“He wants to do everything I want to do. He has the same mannerisms. He loves to work outside and do stuff outside. Everything I do, he will do. So, if I’m taking a drill or trying to fix something, he’ll try to fix something. If I go, ‘hmm,’ he’ll go, ‘hmm,’” says Joshua. “We’re inseparable.”

They say they know their son is a gift from God, made especially for them.

“It’s a perfect example of trusting God. He made this baby for us,” says Joshua.

“He was sent directly from God,” agrees Katina. “He is a special gift to us after everything we’ve been through.”

It has been a difficult journey for Katina and Joshua, who have long desired to have children together.  On Valentine’s Day 2013, the couple from Mechanic Falls learned Katina was pregnant, only to have their joy turn to heartache when an ultrasound revealed that their child had anencephaly, meaning her skull had not formed properly.

“It was the worst diagnosis that we could have gotten,” says Katina.

With no chance the baby would survive after birth, they say they were advised to have an abortion.  Instead, amid many tears, the Tices chose to put their faith in God and carry their baby to term.

“I knew that God gave me that baby for a reason,” says Katina. “I said, ‘That is life. That is not my choice to get rid of it.’”

They named their daughter Leilani, which means heavenly child in Hawaiian.  Although she only lived for a short time after birth, just long to be embraced and baptized, the Tices say their daughter has had a lasting impact on their lives, bringing them closer together as a couple and closer to Christ. 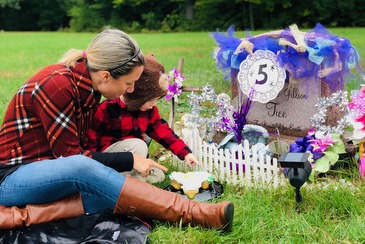 Before Katina’s pregnancy, the Tices only attended Mass occasionally. After learning of their daughter’s condition, seeking answers and comfort, the Church became part of their lives. As a result, their relationship with God and their trust in Him strengthened.

The Tices celebrate their daughter’s life with a family gathering every birthday and through Leilani’s Legacy, charitable work done in her name. Still, they have hoped and prayed to be blessed with another child to join them and Nevaeh, Katina’s daughter from a previous marriage.

Emmitt was the answer to those prayers, but this gift of love came to the Tices in a way they hadn’t originally envisioned, through adoption.

“He is the greatest gift ever,” says Joshua.

“He was the blessing I needed,” says Katina. “He saved my life. I was so sad. I felt very hopeless, like I wasn’t going to have another child. Even though on a spiritual level, I was strong, I still had those moments where I was like, ‘Why me? Why me?’ And Josh would always put me back in my spot. ‘No, you have to wait. It’s on God’s time. It’s not on your time.’”

The couple first began thinking about adoption after an acquaintance of Joshua’s asked them if they would ever consider it.  The acquaintance, who knew of their struggles with infertility, assisted women in challenging situations and told them that there were, at times, women looking to find good adoptive families. While Joshua was always open to the idea, Katina was initially hesitant. 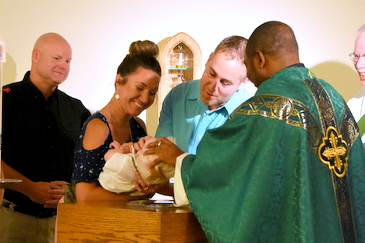 Katina says she changed her mind after attending children’s birthday party and having a little girl, whom she didn’t know, come over and sit on her lap, not saying anything, just sitting calmly with her.

“I started rubbing her hair, and I get this overwhelming warm feeling of, ‘Oh my gosh, I could take this child tomorrow if God called me to do so,’” she says. “I had one of those aha moments with this stranger, and I went home that night, and I told my husband, ‘I’m ready. I could adopt.’ I think God sent that little girl to me to give me that moment of, ‘Yes, Katina. You can do this.’”

Joshua, however, remained concerned about Katina’s emotional readiness. He turned to God for assurance.

“When she said that, I was doing a little prayer. ‘Is my wife ready for this? Ready for adoption?’” he says.

Then, one day, while driving and praying, Joshua says he got his answer. He came to a stop and saw an eagle, which was perched on a rock and then flew over his truck. The Tices say they have had a connection with eagles ever since Leilani’s funeral, when, after the closing hymn “On Eagle’s Wings,” they exited the church to see two eagles circling above.

“I see that, and I’m like, ‘OK, this I legit. This is You saying that she is ready.’ That was some reassurance for me,” Joshua says.

Knowing that adoption is costly, the Tices considered foster care, but after taking a class on it, they decided it wasn’t for them because placement may not be permanent.

“We could never be placed with a child and then have another child be taken away from us. That was our biggest fear,” says Katina.

They decided to start saving money but then unexpectedly received a call from the acquaintance who had first mentioned adoption to them. The Tices say they were told that a woman had conceived as a result of being raped and had taken the morning-after pill, but the pregnancy had not been terminated.  She then considered abortion, but the pregnancy was already far along. 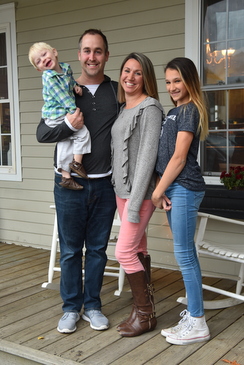 “She didn’t know what to do. She was in a women’s shelter, living with her two kids in one room,” explains Katina.

The families connected, first through a private Facebook message the woman sent and then by phone.

“I remember calling her, and she was so sweet, but you could tell she had a lot going on,” says Katina. “She says, ‘I can’t have another baby. I don’t want another baby. I’m single. I have my two kids. I’m in a women’s shelter right now. I’m trying to get on my feet.’”

They met and plans moved forward. Katina began accompanying the woman to doctor’s appointments. Still, the Tices feared getting their hopes too high, knowing the woman could change her mind.

Katina served as the woman’s birthing coach when Emmitt was born, and even though she told herself not to get too emotionally attached until the adoption was final, her heart won out over her head.

It was only then that they let family members know of their new blessing.

“We called them into the hospital and said we were doing a presentation on Leilani’s Legacy in the hospital, and they needed to come and see us and support us. So, one by one, they came into the hospital room, and then, we presented them with their new family member. It was awesome!” says Katina.

Joshua and Katina say they know the birth mother went through a horrific situation. Yet, they look upon Emmitt and can’t help but think that he was meant to live and meant to be with them.

“How beautiful a situation came from such tragedy, from such heartache, from a cross that seems unbearable to carry. Yet, he is the biggest gift that we could ever fathom receiving,” says Katina. “We knew that he was made for us. We just know he was specifically made for us and had to live for us. He wasn’t aborted. He didn’t get aborted from the day-after pill, and he is beautiful, and perfect, and shining with sunshine. He is the most happy-go-lucky, energetic little boy.”

“There were so many opportunities for the birth not to happen, like the day-after pill, and she was hoping to get an abortion. She could have chosen to give him to a family member or whatever it may be. There were so many opportunities that did not follow through that it’s kind of hard to not feel that it was meant to be,” says Joshua. “It’s a perfect example of trusting God. He made this baby for us.”

The Tices say they could not love their son more. 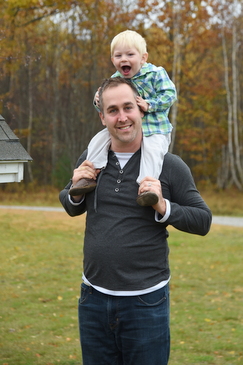 There was never one minute when I looked at him and said he is adopted,” says Joshua. “There is no disconnect. There is no awkwardness. He is our son, and he takes after me. It’s crazy how well he fits in our family. I can’t say it enough. It just proves that he was made for our family.”

“He’s attached to my hip. No matter what is going on, he is right there. I am his world, and it’s been amazing to be able to feel that,” he says.

The Tices have seen Emmitt’s birth mom since the adoption and say they were pleased to see that she seemed to be in a better place.

“She said, ‘I’m so glad that your family is doing great,’” recalls Joshua.

Katina and Joshua say that they would love to have Emmitt meet his birth mother someday, but they will honor her wishes. They will, however, let Emmitt know that he is adopted, while also making sure that he knows he is loved just as much as his sister, Nevaeh.

“They were both made for us from God. One was just made differently than the other and that’s o.k.  I feel like every soul, every child, is made from God with an idea in mind. Regardless of whether it’s going to be in your womb or if it’s going to be in someone else’s womb, it’s still your baby through and through. There is definitely no difference in love.  That initial fear I had years ago, oh my gosh, I could slap myself for having that because it is non-existent,” says Katina.

“I’ve never considered him my adopted brother.  He is my little brother,” adds Nevaeh, who is 10 years older than Emmitt.

For the Tices, the gifts they have received from each of their children are evidence of the preciousness and gift of all life.

“Life begins at conception,” says Katina. “Every single life, regardless of its situation coming into this world or when it’s supposed to leave this world is just as important, and you need to leave it up to God and not take it upon yourself to change the will of God.”

While Katina & Joshua are still hoping to have more children, they say they will continue to leave it in God’s hands.

In the meantime, they say they will celebrate the many blessings they have and try to share those blessings with others.  That includes carrying on Leilani’s Legacy.  This year, they plan to give the gift of family time by donating passes or gift certificates to activities that will bring members together.