'House of Comfort' is a gift for Aroostook County 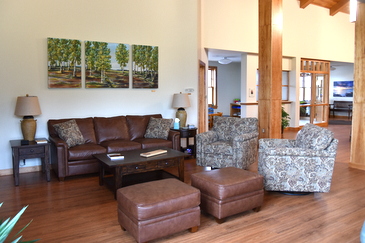 Walk into the Aroostook ‘House of Comfort,’ and there is an immediate feeling of warmth. It comes not only from the volunteer waiting to greet you but from the hardwood floors, the soaring ceiling, the brick fireplace, the beautiful artwork, the knickknack-lined shelves and the pastry on the counter.

“We wanted to make it look like a home,” says Mike MacPherson, vice chairman of the Aroostook Hospice Foundation Board of Directors.

The ‘House of Comfort,’ which began welcoming residents in May, provides palliative care for those at the end of their life, as well as support for their families. Able to serve six residents at a time, it is the only hospice facility in Aroostook County.

“This is a blessing for Aroostook County that people just can’t imagine unless you’ve gone through that time with a person who is a dying. You can’t imagine what that does to you,” says Sue Bernard, an advisory board member, who helped care for her mother at the end of her life. “It’s a dream come true.”

“It’s a very emotional time to have it open,” agrees Nancy Duncan, a board member. “I’m just so thankful.” 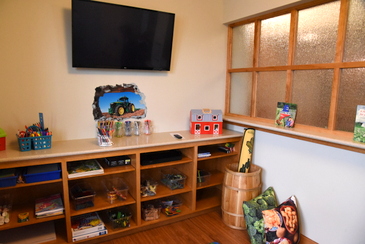 It was Nancy and her husband, Rick, who got the project off the ground nine years ago. At the time, Nancy’s mother-in-law was in the final stages of her battle with cancer.  When her pain got too difficult to manage at home, she was admitted to the Aroostook Medical Center, because there was no hospice facility. She was there for nearly a month.

“We were sleeping there around the clock,” says Nancy. “We were thinking that there has to be a better way.”

The idea for that better way came from Janet Durgin, a nursing instructor at Northern Maine Community College, who had worked with hospice patients for many years. She happened to visit Nancy’s mother-in-law in the hospital and mentioned having a hospice house someday.

“Well, we had never heard of a hospice house, and we just naively said we could do this,” says Nancy. “That’s where the dream started.”

The first meeting for the project was held four months after Nancy’s mother-in-law died. Since that first group of 20 met, thousands more have come forward to help, either through volunteering or making monetary donations.

“This is truly, truly a gift to the County by the people in the County because they have invested so much in it,” Nancy says.

There were many times along the way, however, when it looked like the project was not meant to be.  The foundation was twice given pieces of land to use, only to have early enthusiasm turn into deep disappointment.  The first site contained blue clay, which would have meant significant added expense to build. The second would have required installing an expensive septic system. 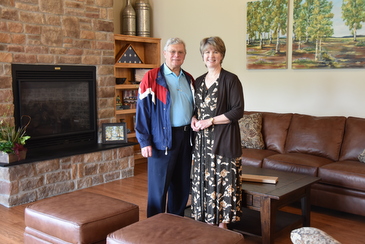 “We were getting so discouraged. We were thinking, ‘Should we sell our house and pay our donors back?’” Nancy recalls.

But for every setback, there was a saving grace.

“It seemed like every time a door closed, a larger door would open,” says Sue.

“We had a gentleman come to us and give us $5, and he said, ‘I wish I could give you more, but this is all I have.’ It meant so much, and it kind of encouraged us. His $5 is somewhere in this building,” says Nancy. “It’s what I call God links. God took us through some terrible trials and discouragement.”

The right site turned out to the former MBNA Call Center, which the foundation had originally rejected because of doubts that it could be transformed into a welcoming home. To accomplish that, just about the entire interior was gutted, and a new section added. The hospice house is 9,800 square feet with another 7,500 square feet of office space leased to VNA Home Health Hospice, which will also provide care to the residents.

The building was purchased in June 2015. Construction began the following June, and in April 2018, an open house was held, during which Bishop Robert Deeley blessed the home and the chapel. “We are community,” the bishop said. “From birth to death, we care for each other in the ways in which that care is needed in that particular moment and at that particular time. This house speaks to the value of relationship, of our common creation, and of our dependence on one another and our need to care for one another.”

The stained-glass windows in the chapel were a gift from Our Lady of Hope Parish in Portland. Depicting Christ commissioning the apostles “to go, therefore, and make disciples of all nations,” the windows came from the former St. Patrick Church in Portland.

Sue says when the contractor and architect were installing the center window, the two said they were initially disappointed because it appeared dark, but as soon as the window was in place and light shone through, it took their breath away.

“They each told the other that they experienced chills when they saw the glass come alive with Christ’s image,” she says. 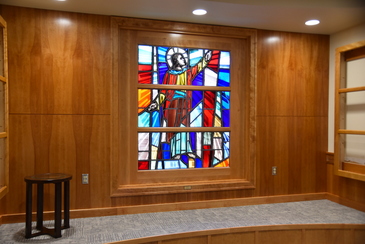 Along with the chapel, the ‘House of Comfort’ features a living room, a central kitchen and dining area, a children’s play area, and gathering spots outside residents’ rooms, each with a theme that reflects the family who contributed towards it.  For instance, one area celebrates agriculture.

The residents’ rooms all include kitchenettes, areas where family members can sleep, flat screen TVs, rocking chairs, and bathrooms large enough to easily accommodate wheelchairs.  Although the beds are hospital beds, they have wooden headboards and footboards to give them a cozier feel, and each is covered with a donated quilt.

“When the patient dies, the quilt goes to the family,” says Mike.

The rooms also have blankets donated by the Holy Rosary Blanket Ministry from the Parish of the Precious Blood in Caribou.

Each room has large windows overlooking gardens. And the grounds also include a gazebo, a memorial garden, and a walking trail. 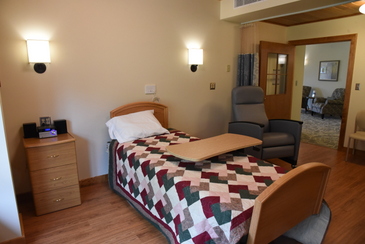 “It’s about living, not just about the process of passing,” says Nancy. “You’re still making memories. You’re still talking or just being together as family and friends.”

“Some people may choose to stay home, but now they have this choice,” says Nancy. “It means the world to me.”

Although the hospice house is now open, the foundation still has much work to do, including raising money to pay off a $2.8 million loan from the U.S. Department of Agriculture. The foundation emphasizes that no gift is too small.

“Every penny from our donors has been put into what we had for a dream,” says Nancy.