An Art for Teaching 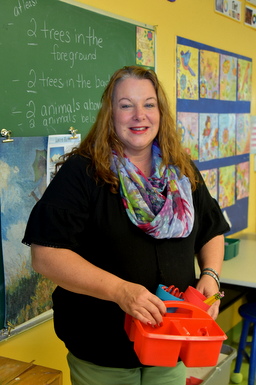 Surrounded by splashes of color, those are among the words that greet you as you enter Holy Cross School in South Portland.

The wall of words is the work of art students, who were challenged by teacher Karen Halvorsen to encapsulate in a single word their goals for 2020. They then painted them, using lettering and colors that would make each distinct.

“They were all given a sponge and the same colors, and then, they had to figure out a way to make it stand out from everyone else’s,” explains Halvorsen.  “I was surprised at how much the kids got into that.”

The words chosen would come as no surprise to anyone who has stopped by one of Halvorsen’s classes. They reflect both her teaching style and what she tries to impart to her students.

“She has really motivated me to push past my limits,” says Samantha, an eighth grader. “She encourages me to try different techniques and do different types of art.”

“She brought out my confidence and said that my stuff was good, even though I felt like it wasn’t,” says Matthew, an eighth grader, who is new to the school.

“She always encourages us to do our best,” says Mackenzie, also an eighth grader.  “A few years ago, I never really liked my artwork for what it was, and she always helped me feel better about my artwork. She’s always given me other things to try or to do to make it look the way I want it to.” 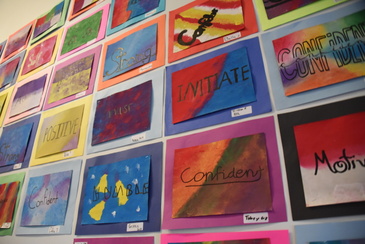 “Everyone has different skills, and talents, and levels of it, but it is such a great feeling when they really feel like, ‘I actually like my project this time,’” she says.

“I think the most special part of what she does is the interaction that she has with the light of Christ and sharing that with her students and with the school community,” says Cindy Elwood, principal.  “She does it so naturally that she doesn’t even know she does it. She is very humble.”

Halvorsen has been teaching art at Holy Cross for 14 years, calling it “the best job in the school.”  She teaches every grade level, from preschool to grade eight, having each class twice a week.

Halvorsen developed the art curriculum herself, designing it to teach students different styles, techniques, and terminology, while, at the same time, encouraging their creativity and helping them develop an appreciation for all forms of art.

“My talent is in teaching and finding interesting projects, more than in being an artist,” she says. “I’ve always wanted to be a teacher.”

She draws ideas from events going on in the world or from the children’s interests. She also follows the blogs of other art teachers. 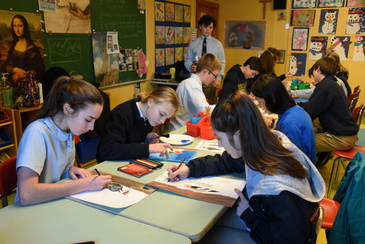 “There are a ton of blogs, and I have a couple favorites. Everyone just shares ideas,” she says.

She says being in a Catholic school gives her the opportunity to continually adapt her curriculum to best bring out the gifts of her students, rather than having to follow strict guidelines.

“If I have a class that really loves to paint, I can do more painting projects. If I’m trying to teach something, and a class just isn’t getting it, I can stop and do another project and teach them the same thing in a different way,” she says.

Another benefit of a Catholic school, she says, is being able to celebrate religious holidays, such as Christmas, in art.

At times, all students will work on similar assignments, while others are grade specific. Projects for the youngest students are often geared toward helping them with their fine motor skills.

“Tracing and cutting is huge because a lot of them come in never having held scissors and having had their coats buttoned for them, so their fine motor skills need developing,” she says. 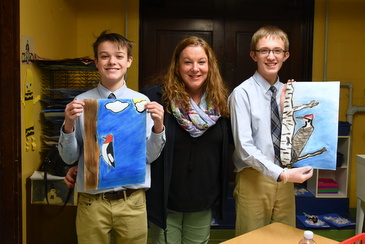 A recent project, for instance, had them pinching together tissue paper to make snowmen, a lesson that also taught them the meaning of texture.

“Texture is how something looks or feels, so they’re bumpy,” she says.

In second and third grade, she places increased emphasis on creativity.

“Second, third, and fourth is really the outlining and the details, like, when you color a sky, you don’t have to just use blue or just one color,” she says. “How are you going to make yours stand out from everyone else’s?”

For the middle school grades, the choices expand even more.  Halvorsen says, while she provides guidelines, a lot is left up to the students.

“Make it your own. That’s what I always say to them,” she says. “They can use paint, or they can use chalk. Maybe some of them like Sharpies and crayons, or they can do a mixture of everything.  They have a lot more choices.”

Halvorsen introduces her students to many different art forms, using the masters as their guides.

“I gear projects toward the artist,” she says. “I keep the artist the same for each year, so, for example, everyone who goes through me will be able to learn Picasso in sixth grade, and Jackson Pollock in seventh grade, and Monet in eighth grade.” 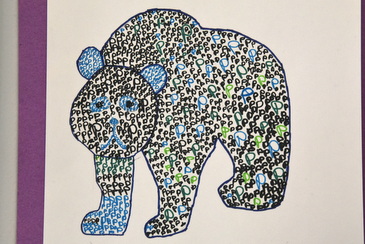 But the masters aren’t only for the middle schoolers.  Kindergarten students, for instance, learn about the work of Swiss-born abstract artist Paul Klee.

“I’ve used the same project for a couple years. They start with a circle in the center of the paper. Then, they have to close their eyes, and I’ll say, ‘Draw a straight line up, three loops to the right.’ They are not to lift their crayon and not to open their eyes.  They discover everyone’s is different, even though they heard the same set of directions,” she says. “The kids love it. They feel pretty comfortable, and somebody who doesn’t think of themselves as an artist, it kind of gives them confidence.”

French postimpressionist artist Georges-Pierre Seurat is the inspiration for first and second graders who are creating a winter scene using pointillism, while fifth graders are introduced to the work of Grant Wood, known for his iconic “American Gothic” painting.

“I try to incorporate American artists, because I feel like they’re not as popular,” she says. “I did an American artist Jasper Johns, who does American flags, and I had a dad come to me with tears in his eyes. He said it was a great feeling to walk in and see the American flag in art, because you just don’t see it anymore.”

Halvorsen has also featured the work of Canadian landscape artists, American pop artists such as Andy Warhol and Roy Lichtenstein, and surrealists such as René Magritte and Salvador Dali.

“The master artists I keep the same: Van Gogh, Matisse, so they all recognize them.  Then, I just search for other artists. I spend a lot of time in the blogs, or I search online,” she says. 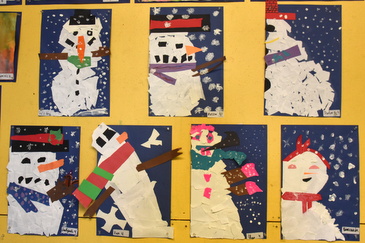 “We had a parent who told us that over Thanksgiving break, they went to New York City. They went to the Metropolitan Museum of Art, and their little kindergartener could tell them all about the artists. He would look at all the art, and he would say that is this artist, and that’s this artist,” says Elwood.

Students create eight or more projects each year, which also include pottery. There is always something new on display at the school.

“When we have parents in, they flock to this area because they know she has a great project, a great presentation,” says Elwood.  “She lives and breathes for art, and you can tell that all over the school.”

Her love for art is evident when you see her interact with her students and witness the resulting effort they put into their work.

“I really like that she lets us do what we want to do. She gives us help if we need help, but she also makes us do it on our own,” says Elizabeth, an eighth grader, who was one of the winners of the Diocese of Portland’s Christmas Card Art Contest. 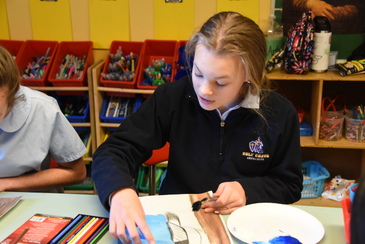 “She has helped me a lot by encouraging me. I’ll turn something into her, and she’ll say go back and add more detail,” says Tobey, an eighth grader.  “I’ll realize I could add a lot more detail in a lot more things in my picture, so it would look better.”

“I love art class. I think it’s a good escape from all the school stuff that can be stressful at times,” says Rosie, an eighth grader. “I like being creative.”

Halvorsen says, although she’s always ready to help, it’s important to let the students make the work their own.

“A lot of people want to say, ‘No, don’t do it that way. Do it this way.’ I don’t do that,” she says. “When you see their art, it is their art. I haven’t changed anything. When you change something, the message you send to a child is that your art wasn’t good enough.”

Halvorsen says she believes all her students have artistic ability. It’s her job to bring it out.

“The kids who I’ve had for years and years, and who have gone through my curriculum, have come so far. They’ve grown, and they believe they can do it.  That’s huge,” she says.  “When they start to believe in what they can do, it’s unbelievable what they are able to do.”