A heart for those who are homeless 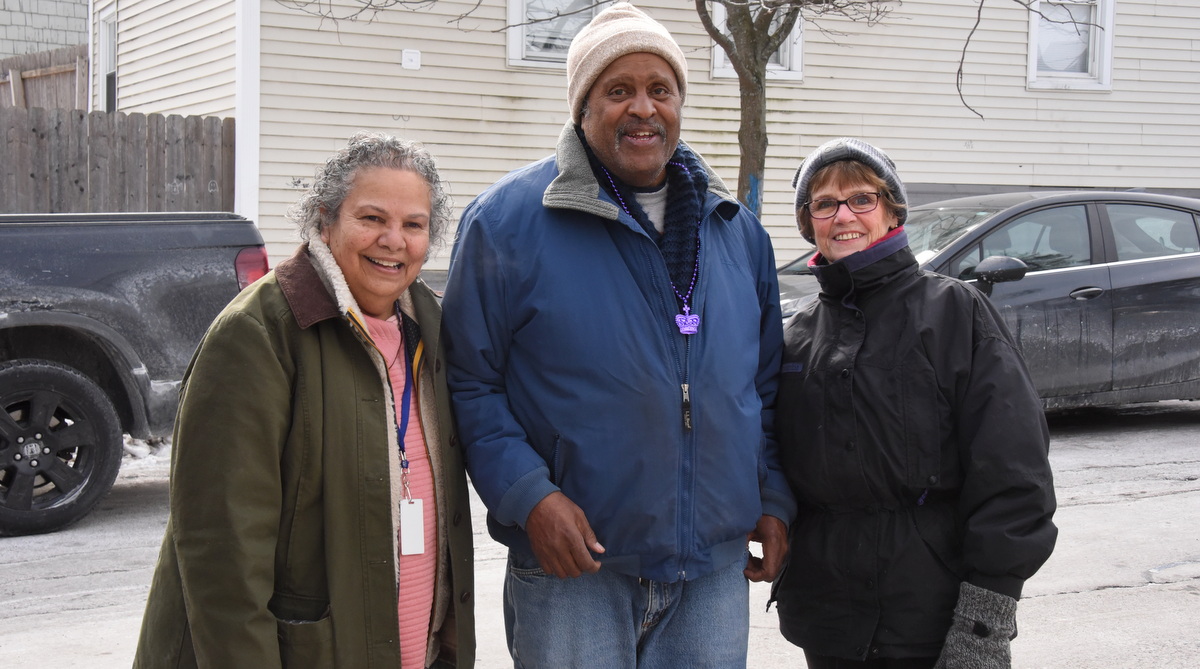 When Blanca Lytle pulls up outside the Oxford Street Shelter in Portland, it doesn’t take long for a small crowd to gather around her.

“We’ve got ham. We’ve got peanut butter and jelly,” she says, pointing to lunch bags lined up in crates that she has taken out of the back of her vehicle.

Along with the sandwiches, there are crates containing toiletries, socks, and other items, all free for the taking for anyone who wants them, the result of a ministry that started in Blanca’s kitchen but has now spread throughout St. Anthony of Padua Parish in Westbrook.

“God has given me a heart for these people,” Blanca says. “Pope Francis says the best power we have is service, and that it is. It builds our faith, and it builds our fellowship with one another. The Holy Spirit is in that mix.”

Blanca began serving people struggling with homelessness in August 2020. That is when, while dropping her grandson off at Cheverus High School, she spotted a man standing on a street corner, holding a sign. Not having traveled much into Portland since moving to Windham from Oregon five years ago, she says she was struck by the sight.

“I said to myself, ‘I wonder. If Jesus were here, what would His sign say?’ And that passage from Peter came to me, where Christ is saying to him, ‘Peter, do you love me?’ And Peter says, ‘Yes, Lord, I do.’ And Jesus says, ‘Then, feed my lambs.’ I was just listening to that whole passage come into my heart and my head.”

She looked for the man after leaving the school but couldn’t find him. The thought, however, stayed with her.

“I said to myself, ‘I think I can take that call that Jesus is telling me. I can do something. I can make a sandwich and put it in a bag and give it to him.’ So, I went the next day, and sure enough, the man was there, and I gave him the sandwiches. He said to me, ‘God bless you.’ He asked for God to bless me! From then on, it was like, ‘OK, I’m going to do this.’”

And that is just what she did. She began not only making sandwiches but also hot meals, driving into Portland to hand them out to people she came across.

“I just started looking around. I just would drive around,” she says. 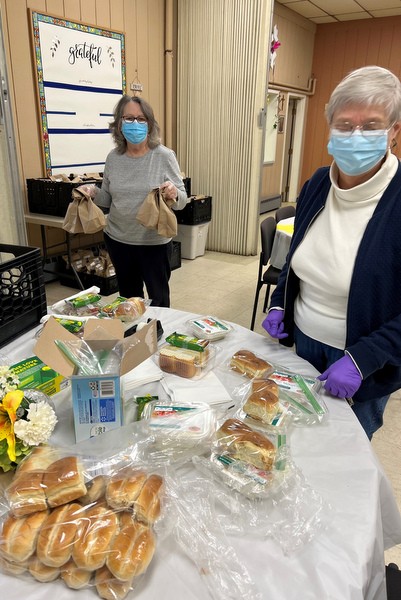 Blanca did the ministry on her own for a few months, but soon, others learned what she was doing and volunteered to help.

“Somebody would call me and say, ‘What are you doing?’ And I would say, I’m making sandwiches and taking them downtown.’ And they said, ‘Well, I want to help you,’ so they would come. The next thing I knew, those gals took it over. It’s such a beautiful thing to see. That is Christ in motion.”

“Those gals” include parishioners and members of the Women’s Guild at Our Lady of Perpetual Help Church in Windham, one of the three churches of St. Anthony of Padua Parish.

“I heard the call and I answered. My interest in it really stemmed from my many years of teaching in the Portland school system, where, like probably most teachers, we always would have food available for our hungry students,” says Camille Swander, one of the volunteers. “I think that’s kind of what we’re all about. It’s the least you can do for your brother.”

“I was homeless once many years ago, and this is my chance at giving back. I think that’s my calling. That’s what Jesus wants me to do,” says Terry Riel, of Windham, who joins Blanca when she distributes sandwiches downtown.

“I do it to help people out, to give people a lift for the day, hopefully give them a lift,” says Garry Stevens of Raymond, who transports the sandwiches from the church to Portland where he meets with Blanca and Terry to distribute them.

“I just wanted to give back. With COVID and everything, I was looking for some way to help, and that was perfect,” says Diane Fuller, who is from Gray.

The ministry shifted from Blanca’s home to the kitchen at the church. Volunteers gather at 7 a.m. on Tuesday mornings, before daily Mass, to get the sandwiches ready. While originally, Blanca was preparing about 30 meals to take downtown, now the group makes 265 sandwiches. Blanca still distributes some outside the homeless shelter, while 30 others go to the Windham Community Food Pantry, and 205 sandwiches are taken to Motel 6 in Portland, which is being used as temporary housing for those who are homeless and for some families newly arrived in the country.

“There are about seven of us, and we’ve got this system going where we can make more than 200 sandwiches in an hour and bag them and have them ready to go,” says Patricia Sullivan of Windham.

Claire Cressey, of Windham, is always the first one to arrive.

“I get all the bread out and all the meat out and the cheese,” she says. “I take everything out of the plastic bags. Then, I take all the fruit out, so when they come in, they can start on the bags, put all the fruit and the napkins in and all that stuff.” 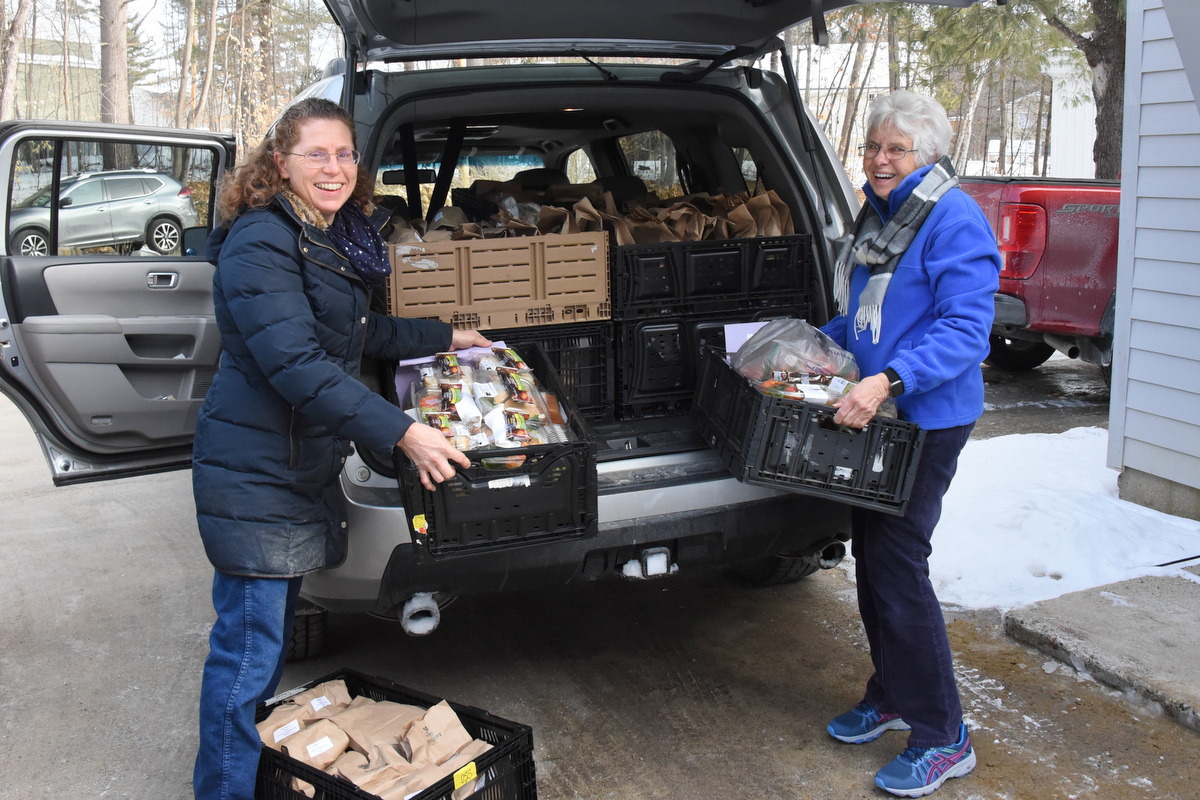 “Rita Lovejoy wants to help, so she has been making things in her home, just little things to add to the lunch bags, like she made little Valentine’s Day bags,” says Kathleen March of Windham, who, along with Judy Smeltzer, delivers the meals to the motel.

“We not only feed them physically, but we feed them spiritually, so we would include rosaries in the bag, and we would put in little messages,” Blanca says.

A Spanish teacher at St. Brigid School in Portland, Blanca has also included greetings from some of her students.

“They wrote, ‘God loves you and we do, too.’ It was very much a lot of love that they were giving to the homeless. ‘Stay warm.’ That was my favorite,” says Blanca.

Recognizing that staying warm can be a challenge for those living on the streets, Blanca began, early on, also collecting and distributing clothing, most donated by parishioners.

“People started opening up their closets, and all throughout the wintertime, I started distributing clothes and shoes and socks and gloves and hats. One woman, she was just making hats, and she brought a whole bunch of them that she had knitted, so we distributed them. And Catholic Charities gave me over 200 essential bags last year that had toothpaste and a toothbrush and some essential things like warmers,” says Blanca.

While the parish recently started getting food from Wayside Food Programs, which is a Portland-based hunger relief organization, and from the Gorham Food Pantry, parishioners help out there as well, whether through donating food, gift cards, or money.

“We have one parishioner, she is out of town. She is one of our snowbirds, but I sent out an email, kind of a newsletter, and we put a thing in there about the ministry and what we needed, and she put in an order online from BJ’s. She said, ‘You’ve got package headed your way,’” says Kathleen.

While the group in Windham had been getting together every Tuesday morning to make sandwiches, that changed in February when the parish’s two other churches came on board. Now, parishioners who attend St. Anne Church in Gorham make sandwiches on the second Tuesday of each month, while those at St. Hyacinth Church in Westbrook have taken the fourth Sunday.

“I was down at St. Hyacinth’s and I walked in, and they had boxes of sandwiches already made,” says Blanca. “I was just blown away by everything.”

Another church is also looking to come on board. Christine says Christ the Redeemer Presbyterian Church in Portland is considering making and distributing sandwiches on the first Saturday of each month.

The volunteers who participate in the ministry say the people they’re serving aren’t the only ones benefiting from it.

“People have a need to be needed, as much as people have needs,” says Kathleen. “It brings community. It does bonding. We all just came out of COVID, and people are looking for a way to be involved in something and get their Church family back.”

“It’s really a nice group of women who are working together for a common purpose,” says Camille. “Especially with this whole COVID thing, it’s been very nice to know that we can do something like this.”

The volunteers can’t say enough about Blanca, the woman who refused to let the call she heard go unanswered.

“She is just an amazing human being,” says Camille.

Those she is serving think she is pretty special, too.

“You’re really trying to show love when somebody’s down and lift us up,” Erick Ross tells her, while outside the Oxford Street Shelter. “I thank her from the bottom of my heart. This is the most blessed thing to happen.”