Seeking healing for those grieving the loss of a child 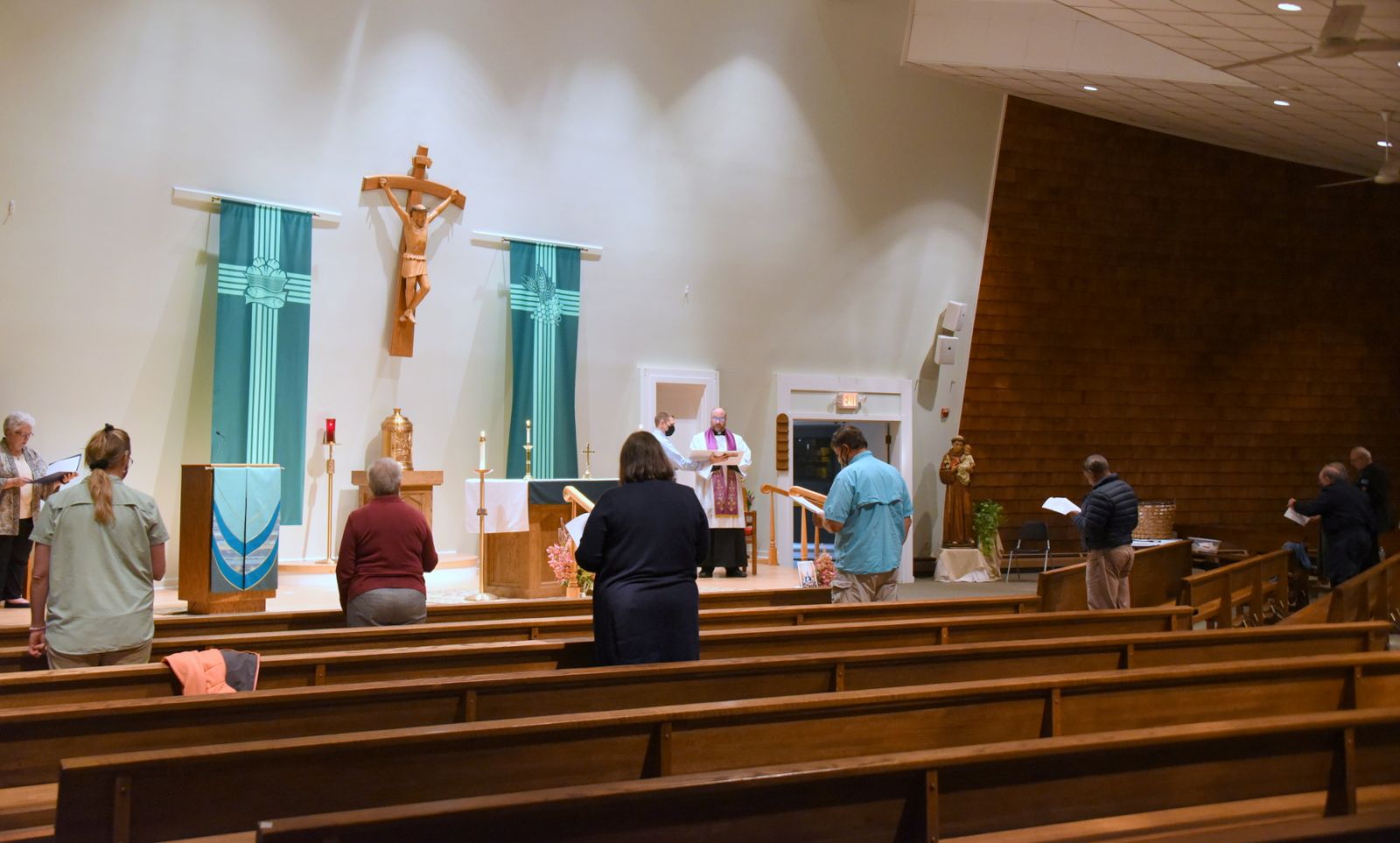 The grief and sorrow experienced after losing a child due to miscarriage is painfully real and not something that should ever be dismissed. It’s also a burden that a woman or family should not have to carry alone. It is those beliefs that led to a new outreach effort offered through the Diocese of Portland’s Project Rachel ministry.

“I really believe that it is the silent suffering of the Church,” says Father Steven Cartwright, parochial vicar of St. Anthony of Padua Parish in Westbrook. “This is a very hidden suffering, a silent suffering in the midst of families.”

“It is especially difficult I believe for someone who has lost a child to miscarriage or stillbirth because they suffer in silence. The message they so often hear is ‘Oh, you’ll have another baby. God will bring you another child,’ as if to say that now you have to move beyond the child you just lost,” says Judy Shaw, coordinator of Project Rachel in Maine. “That is the wrong message we want to be giving to our Catholic brothers and sisters. We want to bring them love, compassion, and mercy.”

Project Rachel is most associated with Rachel’s Vineyard retreats, which help people heal from the pain of abortion, but Judy says the ministry goes beyond that, which is why she wanted to find a way to reach out to those who have suffered the loss of a child through miscarriage, stillbirth, or other causes. Seeking a gentle approach, Judy says her sister, Cathy Bowker, suggested holding a prayer service.

“Cathy thought if we could all come together in prayer, it would let people know that it’s OK to talk about. It’s OK to feel it, and we’re all here to support one another. It doesn’t have to be a hidden suffering any longer,” says Judy.

“There are so many people who are affected by miscarriage, and nobody knows it, and they just feel kind of alone,” says Cathy. “I actually had a miscarriage and an ectopic pregnancy, and you feel almost like you shouldn’t tell people, or if you do tell people, they’re just like, ‘That’s too bad.’ They don’t acknowledge that it’s a child. They expect you to forget about it and move on, and that’s very difficult. It’s a very lonely place to be.” 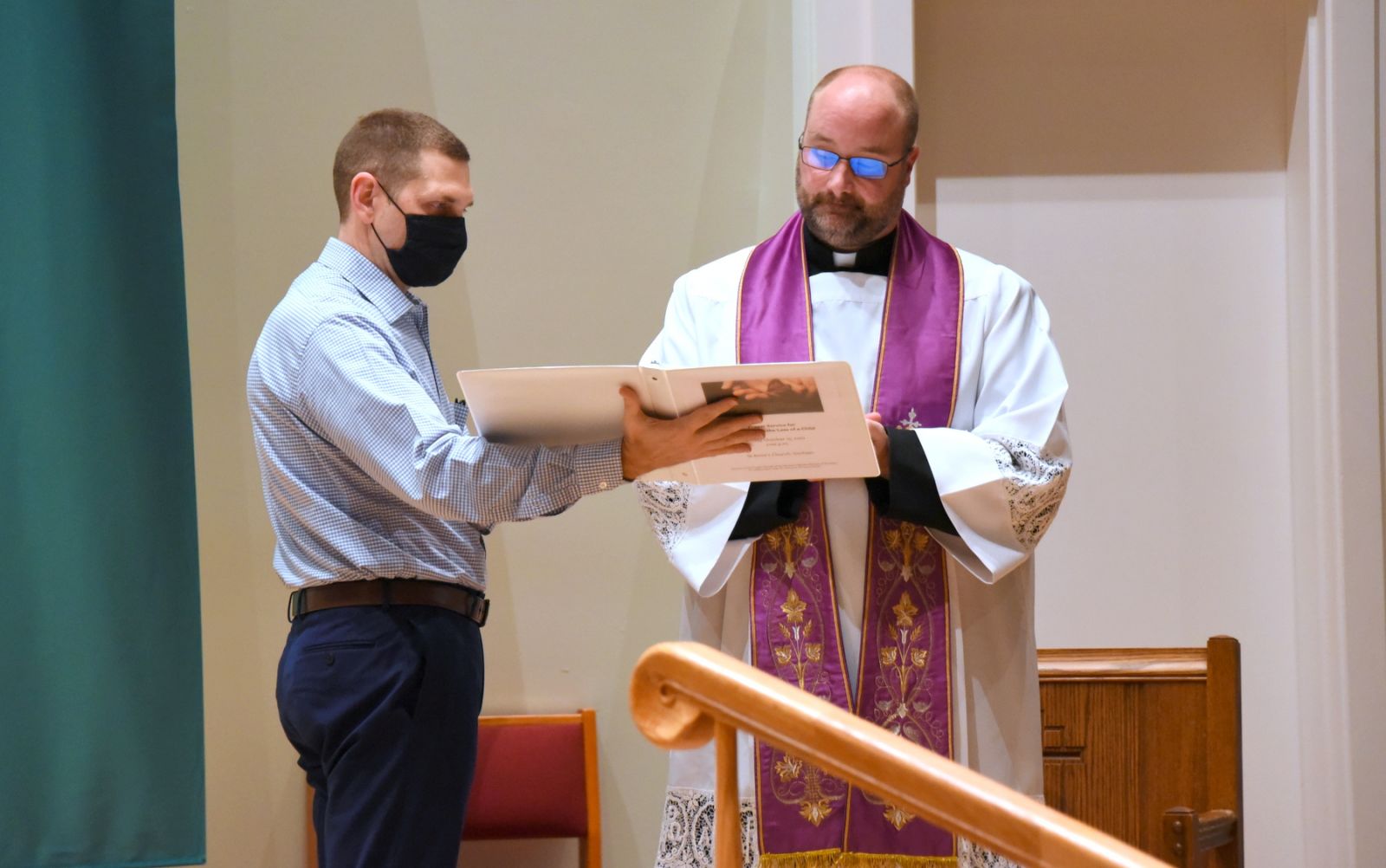 The prayer service was held at St. Anne Church in Gorham on October 15, which is national Pregnancy and Infant Loss Remembrance Day. People of all faiths were invited to attend.

The prayer service, which was led by Father Cartwright, included music, Scripture readings, prayers, and a period of quiet reflection and meditation. During the service, those who experienced the loss of a child were invited to come forward to light a candle in honor of their child and to lift that child up to God. Nearly everyone present did.

“These are people I go to church with every weekend, and some of them were there because I asked them if they could come to help, and lo and behold, they lit a candle, so we just don’t know,” says Judy. “It’s that silent suffering.”

Judy says the use of guided imagery and candle lighting help people to see and understand that they can and should connect with the child who died.

“We want to let them know that we all believe, that the Church knows and believes, that Jesus carried that child to the heavenly nursery, and that they are real, and that they have a soul, and that you can connect with them, that you can have a relationship with them, and you should, because there will always be somebody missing at your Christmas table,” she says.

Both Cathy and Judy say they hope the prayer service helped people to know they are not alone. 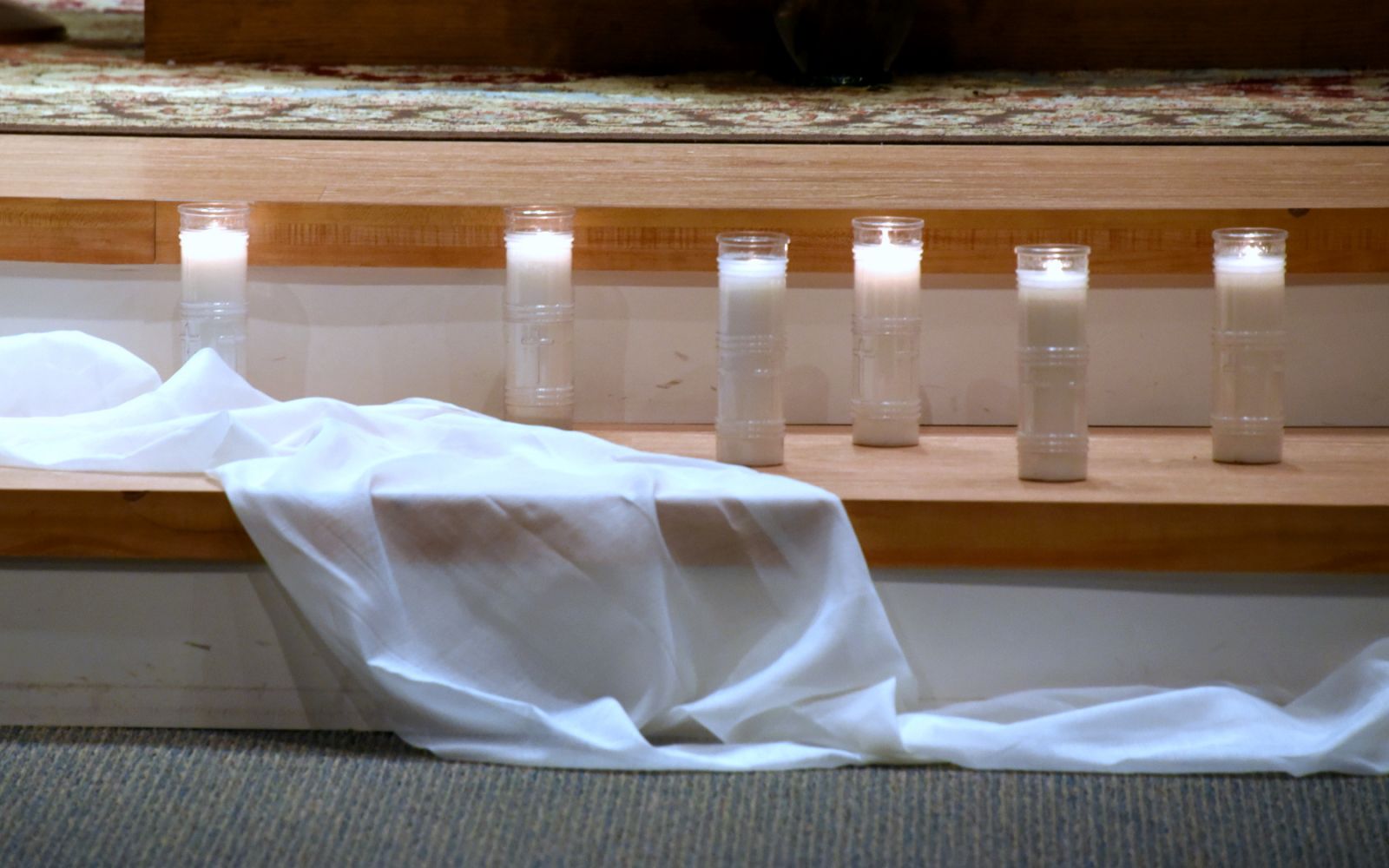 “The goals are twofold, maybe threefold. One is to know that we’re all there to support one another, that we’re all Catholic-Christian brothers and sisters, both in our joys and in our hopes but also in our sufferings,” says Judy. “Then, there is that connection with God, that we can pray to God. We can trust and hope that God is caring for our family members and especially our children.”

“The very thing that I hope they take away is some comfort in knowing that your child is with God and that yes, we have lost something,” says Cathy. “I want people to understand that yes, this was your child. Yes, we’re here to help you, just so they know that there is somebody whom they can talk to if they want to, just to be able to share with other people, that it’s OK to be sad, that it’s OK to acknowledge their baby.”

Cathy says she personally knows how important that is. Each year, she has a Mass celebrated for her children who died.

“Even though we didn’t know the sex, we still gave the babies names to give them an identity. That’s part of the healing process I think,” she says.

For both Cathy and Judy, their desire to help others find peace comes not from their careers but from their own experiences and their faith and trust in God. Neither are social workers or therapists, although Judy says she has a great social work mentor in her son Sam.

“He says, ‘Mom, think of yourself as a chair. If you were standing all day and you needed to sit down, that chair is holding that burden for you a little while so you can rest and regain your strength.’ He says, ‘That is what we do when we minister to people. We hold their burden for them for a brief period of time.’”

Judy says along with Sam, she also feels the presence in her ministry of her other son, Alexander.

“My dear, precious son in heaven accompanies me when I’m helping to minister to people,” she says.

Alexander was lost to Judy through abortion, a pain she has long carried with her and that a Rachel’s Vineyard retreat helped her to bear. 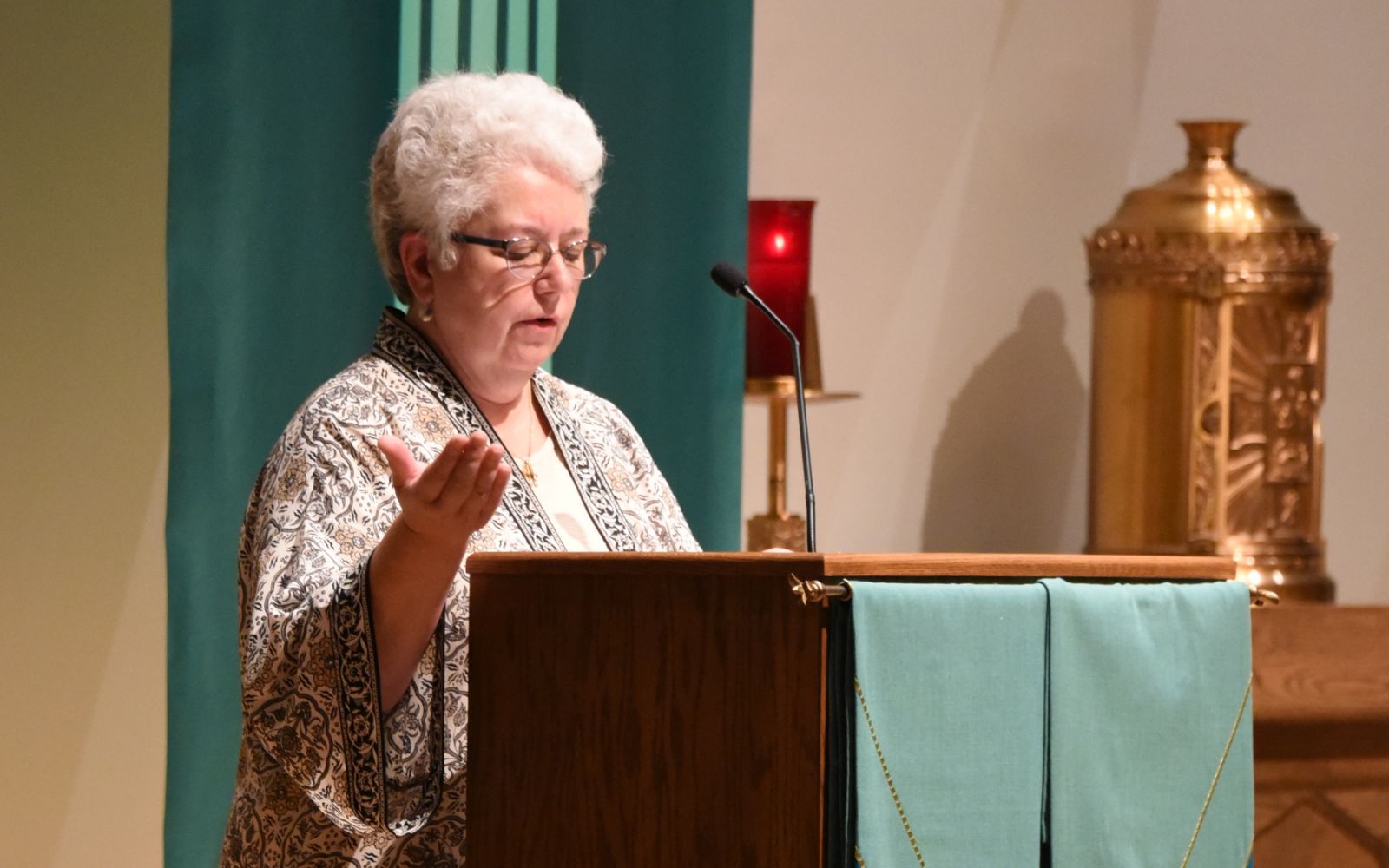 “I entered the weekend thinking that it isn’t going to work. These people are going to judge me as harshly as others had. I had heard messages for many years that I am a murderer. I’m a killer. I deserve no mercy. There is no place for me in the Church, and what I got from the weekend was exactly the opposite — that God’s mercy is endless, and there is no unforgivable sin. As one priest said to me, ‘The only sin that can’t be forgiven is one that you don’t confess,’” she says. “Through the retreat, I was able to receive and accept the forgiveness of God. I was able to acknowledge and accept the forgiveness of my son, but my ability to forgive myself for what I had done is something that is still difficult.”

The retreat made such a difference to Judy that it led her to become the Project Rachel coordinator, so she could help others find similar healing, whether through a Rachel’s Vineyard retreat, through the Language of Compassion, a program aimed at helping people reach out to post-abortive women or men, or through the healing service for those grieving the loss of a child.

“We want to help everybody, through any part of this ministry, journey through the darkness and come out into the light,” she says.

Judy and the Project Rachel team hope other parishes will consider holding healing services for people grieving the loss of children.

“We have a guide that accompanies the worship aid that explains how you can, very simply, pull the prayer service together,” says Judy. “And we will be offering each year to visit one parish that would like to have the Project Rachel team come and help them present the prayer service.”

Judy says they hope that next October 15, parishes around the state will join in commemorating national Pregnancy and Infant Loss Remembrance Day.

“We would love to have as many parishioners as possible, on 7 p.m. that same day, doing this same prayer service so that all these candles are lit throughout the state of Maine in memory of children.”

“It seems as though if anyone should do something for healing and for support and for prayers, it should be the Church,” says Father Cartwright. “Like St. Paul writes, when one member rejoices, we all rejoice, but when one member suffers, we all suffer.”