Saying goodbye to a 'powerhouse of prayer' 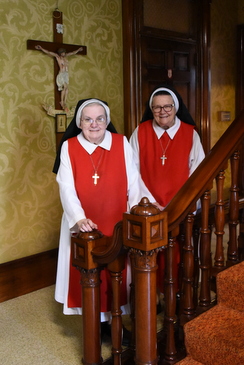 You may not be aware of it, but you have long had a quiet but powerful advocate. The Sisters Adorers of the Precious Blood have been praying for the wellbeing and needs of the people of the Diocese of Portland since they arrived here in 1934.

Now, however, the diocese will have to carry on without them. With their numbers down to two, the sisters decided to move to the Monastery of the Precious Blood in Manchester, N.H., from which the original sisters came 84 years ago.

The sisters will leave behind a beautiful monastery in Portland and, most especially, the many friends they made here.  Those who came to know and love them say it is heartbreaking to see them go.

“It’s so sad. There will be a hole in Portland. I won’t be able to ride by that building without thinking of them,” says Cheryl Lee from South Portland.

“I’m going to miss them so much.  They were always so wonderful to our family,” says Phillis Sullivan from Portland.

A Mass to thank the sisters for their many years of service was celebrated by Bishop Robert Deeley on October 4, the anniversary of their arrival here.  Despite being held on a Tuesday afternoon, the chapel of the Cathedral of the Immaculate Conception was filled to capacity.

“I didn’t think there would be this many people,” says Sister Mary Jo. “It was overwhelming. From the beginning to the end, it was just wonderful.” 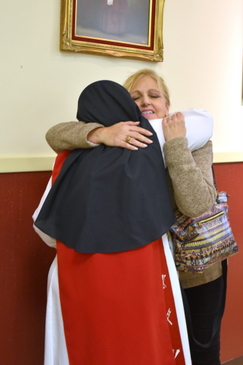 “It was an overwhelming experience of love and memories of friends and family and, also, sadness of saying goodbye,” says Sister Theresa. “There were folks who spoke of generations coming to this house, grandparents bringing them as toddlers.”

That was the case for Kathryn Malconian, who engulfed Sister Mary Jo in a warm embrace. She says her grandmother and mother escaped the Armenian genocide and, finding no Armenian church here, attended Mass in the monastery’s chapel.

“We all went to the Precious Blood chapel, and over the course of the years, my mother would send many dinners. Then, when she passed away, I did it,” she says. “Then, when I couldn’t, my sister-in-law Josephine Malconian took over.”

“I’m really going to miss them. That was a place for me to come every weekend. The spirituality of it and all, it’s just wonderful,” says Josephine.

The Sisters Adorers of the Precious Blood are a cloistered, contemplative community founded by Mother Catherine Aurelia Caouette in Saint-Hyacinthe, Quebec, in 1861.  In the years that followed, monasteries opened in Canada and the United States, including the one in Manchester.

In 1934, Bishop Joseph McCarthy, the sixth bishop of Portland, invited the sisters to come here, believing their presence was needed to “round out the life of the Church in Maine.”

The bishop of Manchester told Bishop McCarthy at the time: “They are a powerhouse, a spiritual dynamo for me, for my priests, and for my people. Through them, I receive the power to carry out my difficult work, my priests receive power and encouragement, the people find relief and comfort.”

During the anniversary Mass, Bishop Deeley said that those words proved true.

“Bishop (John) Peterson assured Bishop McCarthy that the sisters would be a powerhouse of prayer and charity. The convent has been ever thus. We who have been graced to know of the strength and encouragement that has come from the prayers and kindnesses of the sisters will be forever grateful for that grace,” Bishop Deeley said. 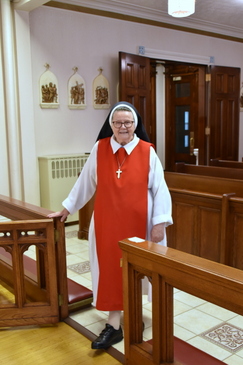 Seven sisters came to Portland, buying the William Pitt Fessenden House from the diocese. The home had previously served as King’s Academy, a school for girls and women who were taught by the Sisters of Mercy. The monastery was named Mount Alvernia, after the place where St. Francis of Assisi received his stigmata.  The sisters’ arrival coincided with his feast day.

The sisters immediately sought to make friends in the neighborhood.  Located near both a Congregational Church and the Episcopal cathedral, they reached out to their Protestant brothers and sisters.

“They made ecumenism part of their prayer long before the Second Vatican Council called the whole Church to such an awareness,” Bishop Deeley says.

Then, and always, the sisters were known for their generosity.

“To reach out to those in need is not just a suggestion from Jesus. He says, ‘What you do to the least of my brothers, you do to me.’ So, we must be alert and ready to help,” says Sister Theresa.  “Sister Mary Jo has always been a beacon of generosity in this community. She has taught me what it means to have a generous heart and spirit.”

Although they lived apart from the world, they were never disconnected from it. That included keeping their outer chapel open for those seeking a place of peace and prayer.

“It was a place of real quiet and a real sense of the presence of God,” says Sister Mary Morey, a Sister of Mercy, who first went there as a child.

At the peak, there were 14 sisters in the monastery.  Sister Mary Jo, originally from Westbrook, joined the community in 1961 at age 18.

“It must have been the Lord himself because that is what He wanted,” she says. 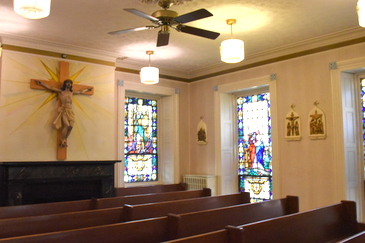 Sister Mary Jo says she knew of the sisters because her mother used to visit the chapel. She says she would stop there, too, on her way home from Cathedral High School.

“Sometimes, we just came over to the chapel, me and a few of my friends, just to talk to the Lord, and then go back and get the bus,” she recalls.

Sister Theresa made her first vows later in life, following a marriage and annulment and a career as a teacher of bilingual, migrant children in rural Michigan.

Born in Waltham, Mass., she says she first thought about becoming a nun when she was a child and would watch pairs of sisters boarding Boston subway cars.

Although her life went in another direction, she says she felt the pull again following a pilgrimage to Medjugorje.

“When I came back, I was very much in love with the Lord,” she says. “I felt a real need for prayer.”

A Peaks Island retreat that she took with her mother and grandmother brought her to the monastery here. She remembers sitting in the choir where the sisters pray and feeling an overwhelming sense of confirmation. 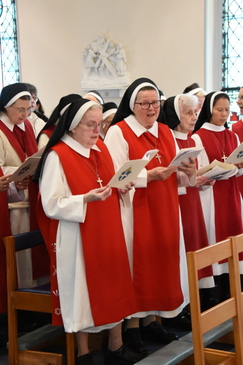 “I had been looking, and talking, and communicating, and praying. Then, I came for a visit and I stayed,” she says.

The sisters’ charism is centered on a great devotion and love of the Precious Blood of Jesus.

“That is seen as a source of love and strength, redemption and salvation, and much-needed graces,” says Sister Theresa.

They commit themselves, as the first sisters did, to “be faithful, constant, and generous in adoration, reparation, and suffering."

“We made an obligation to live by a little different standard,” says Sister Mary Jo. “It’s still the standard all Christians have; it’s basically the Gospel message of love. We just try to commit ourselves more deeply to it.”

While they have household tasks to do, their ministry is one of prayer, both spoken and silent, which begins when they rise at 5 a.m.

“Being in conversation with God, sometimes just in quiet presence with Him, is a time of strengthening and spiritual growth, healing, peace building, a time of grace, a time of sometimes tears, too,” says Sister Theresa.

They pray for those enrolled in the Union of the Precious Blood, a spiritual union of prayer, as well as for the intentions of people who called or came to their door. Even as they were preparing to leave, a request for prayers came from someone overseas.

“This is how it happens sometimes,” says Sister Mary Jo. “You never know what the day will bring.” 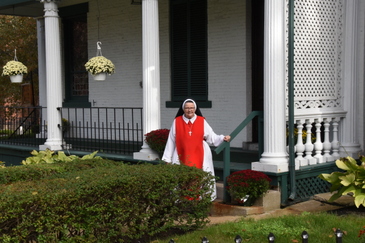 Moving to Manchester will give the sisters an opportunity to have a richer community prayer life. They will join 25 sisters there.

“It will be wonderful to have them with us,” says Sister Joan Milot, APB. “It will add to our prayer life in so many ways.”

Sister Mary Jo and Sister Theresa say they won’t forget the people of the Diocese of Portland.

“We have been blessed our whole time in Maine. Every day, somebody gives us just the promise of prayer. That keeps us going, and we pray with them,” says Sister Mary Jo.

“I will miss a lot of the people here and this beautiful house. It will mean I won’t have the ocean breezes or the joys of so many faces at the door,” says Sister Theresa. “But, also, it will mean to follow as the God of Love beckons -- to become part of a new, old community, offer what I can there and receive what I need there, to grow in prayer and joy of community life.”