Bringing Christ into Focus on Campus 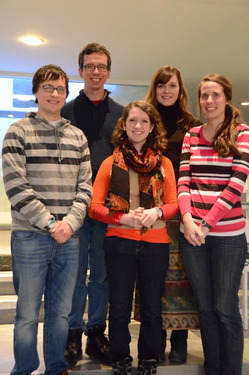 “Hi, have you been here before?”

When Naomi Reeh spots an unfamiliar face in the Newman Center at the University of Maine at Orono, she doesn’t hesitate to go over and say hello.

“I want you to know that you’re always welcome here at the Newman Center,” she says.

Naomi is one of five FOCUS missionaries serving at the UMaine campus. Their mission is to help students grow in their Catholic faith and to teach them how to share that faith with their peers.

“It’s really about bringing students to Christ and forming in them that relationship with Christ, especially through the Eucharist,” says Tom Murphy, the team leader

“We’re living His model of evangelization, so it’s all centered on Christ and sharing Him with college students,” says Naomi.

FOCUS, which is an acronym for the Fellowship of Catholic University Students, was started at Benedictine College in Atchison, Kansas, in 1998 by a man named Curtis Martin, who had been inspired by Pope Saint John Paul II’s call to a “new evangelization.”  FOCUS began with just two missionaries.  Now, there are 450 at 100 college campuses in 35 states.  Through its 17-year history, the program has also helped approximately 500 young men and women hear and respond to God’s call to religious life.

Father Wilfred Labbe, campus chaplain and coordinator of the diocesan Office of Campus Ministry, was first introduced to the program when he attended a national FOCUS conference.  Unsure and even a bit cynical at first, he says he quickly became convinced about the value of their work.

“It was just a place filled with faith. It was the biggest hotel I’ve ever seen, but student after student was full of faith,” he recalls. “It was, ‘Father, can you hear my confession? Father, can I talk to you?’” 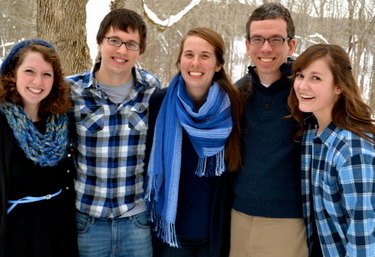 It took a few years to work out the finances and make the arrangements, but the first group of missionaries arrived on campus this fall.  Father Labbe says it didn’t take long to notice a difference.

“I like to say that when they got here, we had no one in Bible studies, but four weeks after they got there, we had 50,” he says.

“The difference has just been immeasurable. The community here has gotten almost like a family, really,” says Catherine Fellows, a UMaine student.

The missionaries are all in their twenties, some of them not far removed from their own college days, so they have an understanding of what campus life is like.  Naomi, for instance, joined the group in January, just a month after earning her college degree. Because she attended Benedictine College, she was familiar with FOCUS, having job shadowed the missionaries there.

“The missionaries really helped me with my faith in college, so I wanted to help other college students in the same way,” she says.  “I just see the importance of the mission so much. The college campus can be a really tough place for students and their faith.”

Tom, who plans to apply for seminary in the Archdiocese of Boston, became a missionary after an internship with them at Boston University.

“I just got to know the missionaries, befriended them, hung out with them a lot, and just saw their passion in reaching souls for Christ, their central prayer life, and the way they could have a conversation with people about the faith, and I just really desired that,” he says. “I desired to be able to communicate why the faith is important to me and why it should be important to them.” 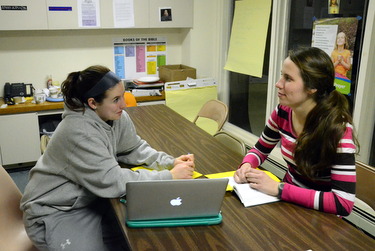 From the start of the fall semester, the missionaries have made their presence known.   They set up tables in the student union to sign up students for Bible studies.  They invited students to a game of Frisbee on the mall.  They regularly go out on campus to meet students, something they call “bare handing” and that Father Labbe refers to as “Black Bear handing,” in recognition of the university mascot.

“I can’t be on campus 24 / 7, and they are,” he says. “They go up and talk to students about faith, about Jesus, about whatever, in a non-judgmental, non-threatening way.  And in doing that, they’re getting the message of the Gospel out.”

“It’s called incarnational evangelization. In order to really share Christ with these students, we first have to be friends with them so that we have that level of trust. Then, we can start to share Christ with them. Naturally, a good friendship is ordered towards the ultimate good, which is Christ,” says Tom.

“We try to do fun things. So, we’ll hang out with students on weekends, and we’ll watch a movie with them or play games,” says Ellen Klein, a missionary.

Once they meet students and help them grow in their faith, they then encourage those students to go out and do the same. 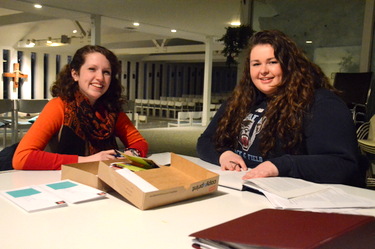 “We also build them up, so they also can reach out to their friends and people that they know,” says Ellen. “So, we’re not just the only missionaries. We come to teach the students that they’re also missionaries, just by the fact of their baptism and who they are. As an instrument of God, they’re meant to share their faith, too.”

Each of the missionaries leads Bible study groups and works individually with three or four students.

“We have one-on-one mentorship that we call discipleship,” says Steven Cybulski, a missionary. “Discipleship is for people who have already taken an intentional step to grow in their faith.”

“They’re not disciples of us; they’re disciples of Christ,” says Tom.  “I think one of things that is really important to understand about FOCUS is that one of our biggest goals is spiritual multiplication…the idea that there is no way that we, ourselves, would be able to reach every single person on campus, and there is no way that one person can reach everyone on campus, and so, what we do is invest deeply in a few that we can spend our time with, share life with, build up in Bible studies, and build up in that mentoring relationship.”

One of those students is Kevin McFadden, a senior.

“I was not nearly as strong in the faith as I am now, since they’ve been here,” he says. “They have really been pushing some awesome stuff.”

Although he was raised Catholic, Kevin says he attended Mass mostly to please his mother and because they would go out to breakfast afterwards.  He says when he came to college, he realized something was missing and discovered, with the help of a friend, that it was Jesus. 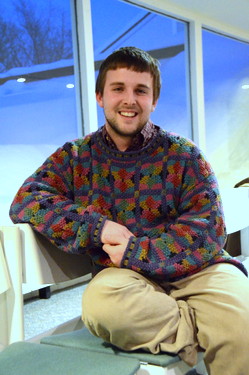 “So, Christ got me back through her. Then, she really made me want to grow in my faith, and the FOCUS missionaries have been giving me the tools to do that, really practical things I can use,” he says.

They include Bible study, the one-on-one mentoring, and Eucharistic adoration, which is now offered every weekday at the Newman Center, instead of just on Fridays.

“Adoration is a big tool, definitely.  Really just pushing that time to be in the presence of Jesus is really wonderful,” he says. “And one of the missionaries loves to read, and we talk about books a lot, and she’ll even give me books, and we trade books. That has been really great, and honestly, our Bible studies have been wonderful.”

There are eight Bible study groups led by the missionaries and another eight now led by students, with a total of approximately 60 students participating.

“That’s been a really awesome thing to see. In the beginning, it’s just us reaching out to the students, but when the students start reaching out to people, they get excited about who they’ve invited to their Bible studies or to different events,” says Samantha Shepard, a missionary. “It’s awesome.”

Kevin is among those who started his own group, with the guidance of the missionaries.

“It’s an atheist and agnostic Bible study. It’s really cool. It’s so cool,” he says.  “The first thing we went through was, ‘Why are you here?  What do you want to get out of this?’  All of the reasons were the same reason I go to Bible studies.  It was incredible.”

Kevin says the students who are participating are all seeking answers, and he’s hoping that, eventually, they will find them in Jesus.

“I really thought it was going to be a big struggle. The missionaries told me to just pray about it, and they’ve been praying about it, and it’s just been working out,” he says. “After the third one, one of them said, ‘Can they be longer?’ They want it to be two hours now.”

Father Labbe says the results of having the FOCUS missionaries on campus have been impressive. He says it has made the Newman Center known among the students. 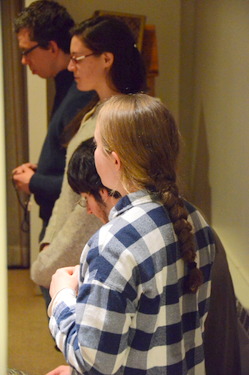 “They’re bringing students to the sacraments, to Mass, to confession, to adoration. Friday is our biggest adoration. There will be 20-25 kids there every Friday,” he says. “For those who are discouraged because they are the youngest person in their congregation, come to Mass here. Come to Sunday Mass and see 100 kids who show up for Mass. Come to adoration on Friday and see them on their knees.”

“People used to come here on Sundays and Wednesdays for Wednesday night suppers, but now, daily, every night, there are people here, just hanging out,” says Catherine. “Everybody’s faith has just grown so much.  Our conversations have just really grown into such spiritual and religious talks.”

It is not unusual, for instance, for a Wednesday night supper to now end with a call to join together in the chapel to pray the rosary.

The missionaries say there are challenges and progress can be slow, but they remain committed to their work.

“There are times when it’s hard and you don’t feel a lot of consolation or that you’re doing a good job, but then, it usually helps when you realize it’s not up to you to convert the campus; it’s up to God,” says Tom. “It works because God wants it to work."

The missionaries say their lives have all benefited from the FOCUS program, and they hope to bring that same gift to others.

“Everything we do is about Him. He is the center of our lives,” says Naomi.

“There is just so much joy in knowing your identity, and so I wanted to bring that to others, especially in college, where you’re making a lot of important decisions,” says Samantha.

“Our faith is awesome, and students need to know about it,” says Ellen. “It’s such a cool thing.”