Ten Lessons for Pastoral Leaders from St. Francis of Assisi and Pope Francis

In many of his addresses, in his apostolic exhortation “The Joy of the Gospel,” and by personal example, Pope Francis has sought to renew the Church along the lines of St. Francis of Assisi.  Here are ten lessons he sets forth for pastoral leaders today. 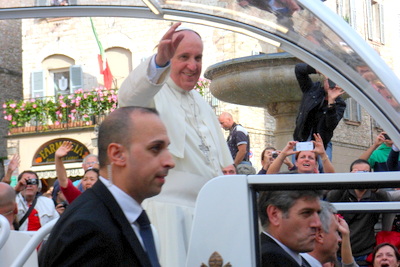 1. The Centrality of Personal Witness to the Joy, the Freshness and the Beauty of the Gospel

The Church does not progress by proselytizing but by witness. Let God’s Word speak through you.  Live that word every day. The Gospel is the message of salvation for all people.  It is not just empty words.  God’s love is greater than any evil; this is the Good News. One of the most serious temptations, which stifles boldness and zeal, is a defeatism which turns us into querulous and disillusioned pessimists, “sourpusses.” Proclaiming Christ means showing that to believe in and follow him is not only something right and true but also something beautiful, capable of filling life with new splendor and profound joy, even in the midst of difficulties.

2. The Necessity for Personal Conversion to the Cross of Christ

The crucifix that spoke to Saint Francis at San Damiano, I was startled to realize on a visit to that church last October, has a Christ with open eyes. Christ gazes upon his church in need of repair and asks Francis rebuilt it.

The Gospel offers us the chance to live on a higher plane. Life grows by being given away and it weakens in isolation and comfort.

3. Pay Attention to the Larger Context

The Church is in need of repair, but the world around it is in the thrall of Satan.  St. Michael the Archangel was often invoked by St. Francis to challenge the power of these satanic forces.  Pope Francis, likewise, is not afraid to use the word Satan or the devil to describe the superhuman forces of evil we must take seriously if we are really looking at the world and wish to proclaim the Gospel there.  He often speaks of the youth who are without a hope or a future and the elderly who live in isolation and poverty.

The Church, Pope Francis says, must have the capacity to heal wounds and warm hearts. It needs nearness and proximity. The Church is like a field hospital after battle. In his typically colorful way, he advises that it is useless to ask a seriously wounded person if he has high cholesterol and about the level of his blood sugar. You have to heal his wounds.

4. Focus on the Core Truths

“I invite all Christians everywhere, at this moment, to a renewed personal encounter with Jesus Christ or at least to an openness to letting Him encounter them,” Pope Francis emphasizes.  “I do not wish to say new things but, rather, to stress the essential ones.” He         continues, “Our message has to concentrate on the essentials, on what is most beautiful, most grand, most appealing and, at the same time, most necessary.”

In today’s world of instant communication and occasionally-biased media coverage, the message we preach runs a greater risk, he observes.  It can be distorted by emphasizing secondary aspects. In this way, the message and its heart are distorted.  It can become like a house of cards. The foundation of the New Law is the grace of the Holy Spirit who is manifested in the faith which works through love. Mercy is the greatest of all the virtues.

5. The Practice of Evangelical Simplicity of Life

The Gospel is all about focusing upon the essentials which lead to true blessedness.  It means shunning worldly standards of success and happiness.

Pope Francis spoke eloquently about this truth when he conferred the honor of the cardinalate.  In his letter to the new cardinals, he reminded them that this is not a personal honor, promotion, or decoration but simply a call to broader service. Accept this new title with a humble heart. Avoid any form of celebration that is contrary to the evangelical spirit of austerity, sobriety and poverty.

At the Cathedral of San Ruffino in Assisi where St. Francis and St. Clare were baptized, I heard Pope Francis, on October 4 of last year, tell parish priests that they must walk with their people, knowing their names, even the names of their pets!  They must walk ahead to give guidance; also along with, to share their lives; and even behind, to reach out to the alienated. They should have upon themselves “the smell of the sheep.”  We must avoid becoming, he wrote later in his exhortation, “mummies in a museum.”

Reflecting on his visit to Brazil for World Youth Day and the massive crowds, he said, “I can look at individual persons one at a time, come in contact in a personal way with the person in front of me.  I am not used to masses.”

7. Going Out to the Fringes

In St. Francis’ time, lepers represented the fringes of society.  Unless he overcame his personal loathing of them, he could not embrace the Gospel of inclusion and personal love of all God’s people, even the least attractive.

In his apostolic exhortation on evangelization, Pope Francis wrote, “I prefer a church which is bruised, hurting and dirty because it has been out on the streets, rather than a Church which is unhealthy from being confined and from clinging to its own security…More than by fear of going astray, my hope is that we will be moved by the fear of being shut up within structures which give us a false sense of security, within rules that make us harsh judges, within habits that make us feel safe, while at our door are people starving.  Jesus does not tire of telling us, ‘Give them something to eat’ (Mk 6:37).”

8. Liturgies and Homilies that Inspire

Liturgy evangelizes by giving people a sense of beauty.  Homilies inspire if they are focused upon the word of God rather than the pet ideas of the homilist.  Homilies that go on and on are a burden to the people.  They also are often incomprehensible.  Homilies should be brief, maybe consist of only two or three key ideas.  A good homily, someone once told Pope Francis, should have an idea, a sentiment, an image.

9. Our  Message is one of Mercy and of Justice

With pointed language, Pope Francis highlights the mercy and justice as being at the heart of the Gospel message. The confessional, he says, must not be a torture chamber but, rather, an encounter with the Lord’s mercy which spurs us on to do our best, even in small steps. Holy Communion is not a prize for the perfect but a powerful medicine and nourishment for the weak.

How can it be that it is not a news item when an elderly homeless person dies of exposure but it is news when the stock market loses a single point? We must not practice charity “a la carte.” Our aim is nothing less than to transform this materialist, consumerist, wasteful world so that it is ready for the Kingdom of God.

10. Becoming Instruments of God’s Peace in the World

Pope Francis sees the Holy Spirit at work both in creating difference and harmony, and so we must learn how to live with diversity in the Church and create greater harmony. The Church is not supposed to be a small chapel but a large tent. We must defend the dignity of every person.  Who would claim to lock up in a church and silence the message of St. Francis of Assisi or of Blessed Teresa of Calcutta?  They themselves would have found this unacceptable.

We love this magnificent planet on which God has put us and we love the human family which dwells here, with all its tragedies and struggles, its hopes and aspirations, its strengths and weaknesses. The earth is our common home and all of us brothers and sisters.