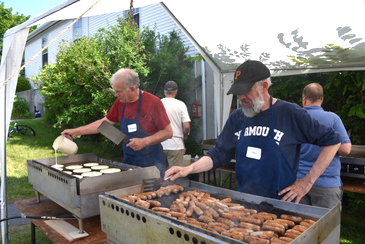 Fourth of July celebrations are known to end with a bang, but in Freeport, they start with a sizzle.  For the past 27 years, St. Jude Church, part of the Parish of the Holy Eucharist, has hosted an all-you-can-eat pancake and sausage breakfast which attracts hundreds of people from miles around.  Since the breakfast started, more than 15,000 people have been served.

“People come here, and they say they meet here once a year.  It’s lovely,” says Jane Weiland, who has been organizing the breakfast for the past three years.

““It’s excellent. The food is delicious, and I didn’t have to cook it,” says Gayle Sulzberger, of Brunswick.

“I give it a 10 out of 10, and the hospitality is great,” says Bill Sulzberger, Gayle’s husband.

The breakfast is held in the church hall, located amid Freeport’s bustling shopping district. It is the event that kicks off the town’s daylong Fourth of July celebration, which also includes the L.L. Bean Fourth of July 10K and One-Mile Family Fun Run/Walk, a parade, and fireworks, among other festivities. 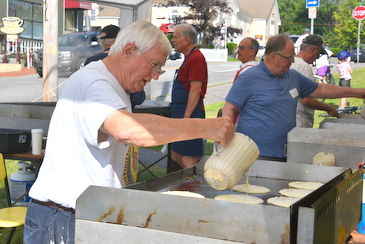 “Year after year, people come here from the race. They go up to the parade right after. It just fits into the groove of their tradition,” says Weiland.

“The reason we’re here is to reach out to the community and to show them what the Parish of the Holy Eucharist is all about it. We demonstrate it, rather than talk about it,” says Marc Held, who has volunteered for the past four or five years.

It takes approximately 60 volunteers to put on the breakfast. That includes the decorators, the ticket sellers, the chefs, the servers, and those clearing tables and washing silverware.  Many of the volunteers return year after year to help.

“This is my 26th year. I missed one year,” says Tom Peacock, while flipping pancakes. “It’s community. We have a lot of fun. We joke around here, and we raise money.  What more fun can you have?”

“I’ve been here since day one,” says Milford Kilton, who was handing out plates to guests. “It’s just great for the whole parish. Everybody gets involved.” 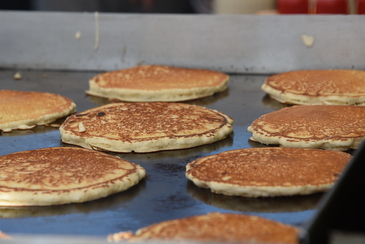 “It’s a good time. It’s a lot of fun,” says Bruce White, one of the chefs. “There is a lot of camaraderie here, a lot of joking back and forth, good food, and it helps the community and helps the church, too.”

For some, volunteering at the breakfast is a family affair.  That is the case with members of the Emery family from Durham, who have turned it into a Fourth of July tradition.
“I like volunteering because it’s a good way to help out the community, and it makes you feel good about yourself,” says Ella Emery, age 14. “People appreciate what you do all the time. They thank you so much.”

“It’s fun. I get to do some work and get my hands dirty,” says Teddy Emery, age 12. “I grab all the junk on the tables and keep this moving, so more people can come.”

“I just love helping people. I get a good feeling when I come out and do stuff like this,” says Eric Emery, Ella’s and Teddy’s father. “It brings people together.”

Patrons have a choice of plain, blueberry, or recently added chocolate chip pancakes, but those manning the grills will tell you there’s no doubt which are the most popular. 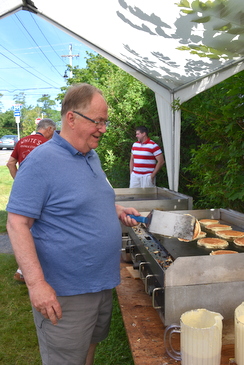 Of course, since it’s all-you-can-eat, you can sample them all if you like.

Peacock says the key to a perfect pancake is to make sure you heat the grill to just the right temperature so that the pancakes don’t burn but are fully cooked on the inside.  He says you know when you get it right.

“People come back and tell us ‘great pancakes, wonderful pancakes, the best I’ve ever had,’” he says.

Guests at this year’s breakfast piled on the praise.

“A-1, fantastic. How could it not be the best?” says Evelyn Fraser, who has been attending since it started and used to volunteer. “It’s wonderful. All the parishioners come, and every year, there are more and more visitors.”

“It’s a very good breakfast. It’s very well run. It brings out the community,” says Maureen Perkins, who also has volunteered in the past.

“I like eating the pancakes and, also, afterwards, helping people” says Maddison Watson, age 10, a patron and a volunteer.

“What’s your highest rating?” asks Jane Bastey, who was enjoying blueberry pancakes and also helped decorate the hall.  “It’s just wonderful, everybody getting together and working together.” 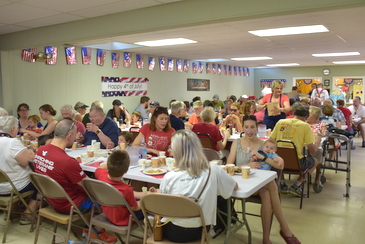 Among those impressed with the undertaking was Father Phil Tracy, the newly appointed pastor who, just four days after arriving, was happily collecting tickets and chatting with guests.

“This is amazing,” he says. “It’s just so organized. The volunteers are plenty. The people are friendly.”

The volunteers say they feel fortunate to be part of such a wonderful parish.

“It’s a community-based parish,” says Mike Crowley, who has volunteered for five years. “There is so much love in the parish. You just feel it, and you want to be involved. It’s a way to give back to the community.”

“St. Jude is kind of a special place, and this is one of the things we can all pitch in and do together,” says Marty White, who was busy making a special chocolate chip pancake for a young guest. 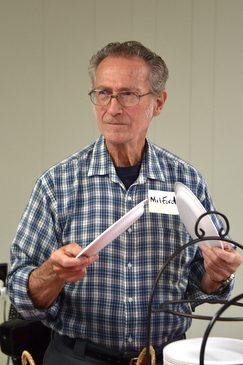 “I think your parish family is important, and I just strongly believe that it’s a good thing to volunteer,” says Gaye White, one of the servers. “It’s such a wonderful community that we have here that it’s inspiring.”

In addition to the volunteers, a dozen area businesses also contributed to the breakfast, either financially or by providing food. For instance, Bow Street Market donated the orange juice. B & M provided the baked beans. Coffee by Design in Freeport contributed the coffee, and McDonald’s in Freeport provided the butter, syrup, and creamers.

The money raised will go to help St. Jude, which is in the midst of a capital campaign.

The pancake breakfast isn’t the only summer fundraiser for the parish.  Each year, the parish also has a food booth at the Yarmouth Clam Festival where it sells fresh fruit cups and cotton candy, and visitors can also stop by the hall at Sacred Heart Church for hamburgers and chips.