An imaginative marketplace for emerging entrepreneurs 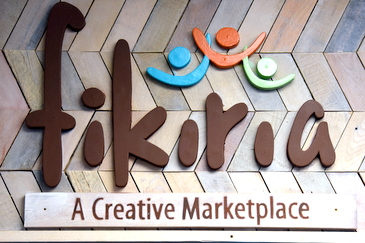 Imagine the possibilities.  That is what Catholic Charities Maine is hoping emerging entrepreneurs will be able to do through a new creative marketplace called “Fikiria.”

“Fikiria means imagine in Swahili, and what we’ve created are little work opportunities for refugees and immigrants, and, really, any of our clients,” explains Stephen Letourneau, Catholic Charities Maine CEO.  “It helps people imagine the possibilities that will come with owning their own business, and it sets them up for success.”

The Fikiria marketplace is located at Catholic Charities’ Threads of Hope thrift store on Brighton Avenue in Portland.  There are 12 available kiosks for entrepreneurs, with rent starting at $325 / month, including utilities. Catholic Charities provides assistance with signage, product display, marketing, and customer relations, and also offers business counseling. Plus, when the small business owners aren’t there, thrift store staff can handle sales.

That is ideal for someone like Nana Batumike, a mother of six, and one of Fikiria’s first tenants. 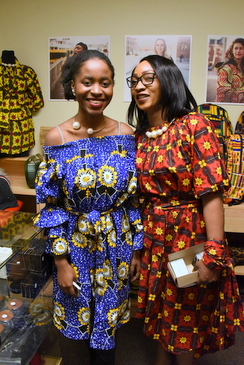 “Catholic Charities gives you a good opportunity to let you begin your business. For me, it’s just amazing to be with them,” says Batumike. “I am happy to do this business with Fikiria because it feels like home.”

Batumike is originally from the Democratic Republic of Congo but was forced to flee in 2012 because of the violence there.  She says she has long wanted to open a business of her own.

“I’m trying to realize that dream of mine,” she says.

“It is just in my imagination. I can see stuff,” she says.

At NanuSka Style, you will also find purses, backpacks, jewelry, and cosmetics, and Batumike also does hair braiding.

Located next to NanuSka Style is Chiffon Alterations, operated by Anaam Jabbir, a talented seamstress, originally from Iraq.

“I like alterations and creating new things. I like to create new things. I like sewing dresses or something – pillowcases, sheets, different things,” she says. “If people come in and bring their fabric, and show me what the design is they want, I can do it.”

Jabbir learned to sew from her mother, who had a small shop in their home in Baghdad for 40 years.  However, Jabbir says she was forced to leave that life behind because of Al-Qaeda threats against her husband, who was a restaurateur.

“They threatened him – leave the restaurant or don’t feed the army. Don’t feed the American or the Iraqi Army. They don’t like that,” she says. 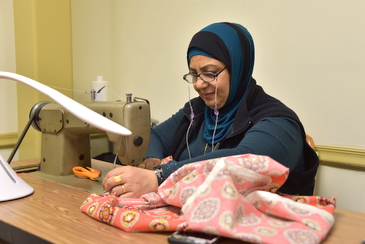 The family first moved to Jordan with the intention of returning home, but when conditions in Iraq didn’t improve, they came to the United States as refugees in 2008.

Jabbir is happily employed at Westbrook-based apparel maker American Roots, where she is the head foreperson, but she says she is also grateful to have a new, creative outlet of her own.

“If you do something and create something, you have to be proud of yourself,” she says. “I just am thankful to Catholic Charities for giving me this opportunity to see for myself what I can do, what I can offer.”

Catholic Charities Maine would like to create that opportunity for more entrepreneurs.

“We want to encourage anyone, particularly seniors, young entrepreneurs, refugees or immigrants to apply for space and join us in highlighting the true creative talents Maine has to offer,” says Letourneau.

He sees Fikiria as especially beneficial for refugees and immigrants, many of whom have advanced degrees and left behind successful careers, only to end up in low paying jobs here.

“So many of them are creative. They’re ambitious. And with just a little bit of help, they can become outstanding small businesspeople,” says Letourneau.

Catholic Charities says it’s fortunate to have many community partners who have helped Fikiria become a reality. They include two corporate partners, Maine Technology Institute and cPort Credit Union, as well as the Bill and Joan Alfond Foundation, Rocking Moon Foundation, and Lee International.  Catholic Charities also received generous contributions from individual donors and in-kind support from iBec Creative, which designed Fikiria’s website, Dory Waxman from Old Port Wool, who donated sewing machines, Kaitlin Toto, who offered her photography skills, and the Open Bench Project, which provided a scholarship for Fikiria tenants to use its studio/workspace. 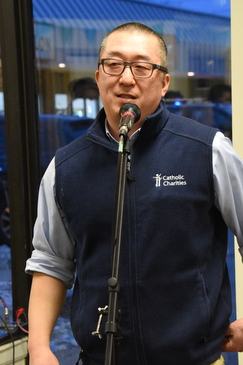 “It’s amazing how giving this community is,” says Chong. “I think they all understand that if we can find a way to help each other, especially those who have more barriers, we all win.”

“What if we have an African designer, an Iraqi stitcher, access a place where you can cut out patterns, and then, you could use materials in the thrift store to make a new product to help save the planet, and create jobs, and create a new industry. And in Maine, that is a phenomenal story because that’s our history. We have this incredible history of textiles, and Yankee ingenuity, and making new products out of reclaimed stuff,” he says.

“America is built around small business.  What we’re doing is unleashing the American dream,” adds Letourneau.  “This is such an exciting endeavor for Catholic Charities.”

If you would like to learn more about Fikiria and the opportunities it provides or are interested in making a contribution to it, visit https://fikiramaine.org or email Tae Chong at [email protected].