A project in motion: priestly life and service in retirement 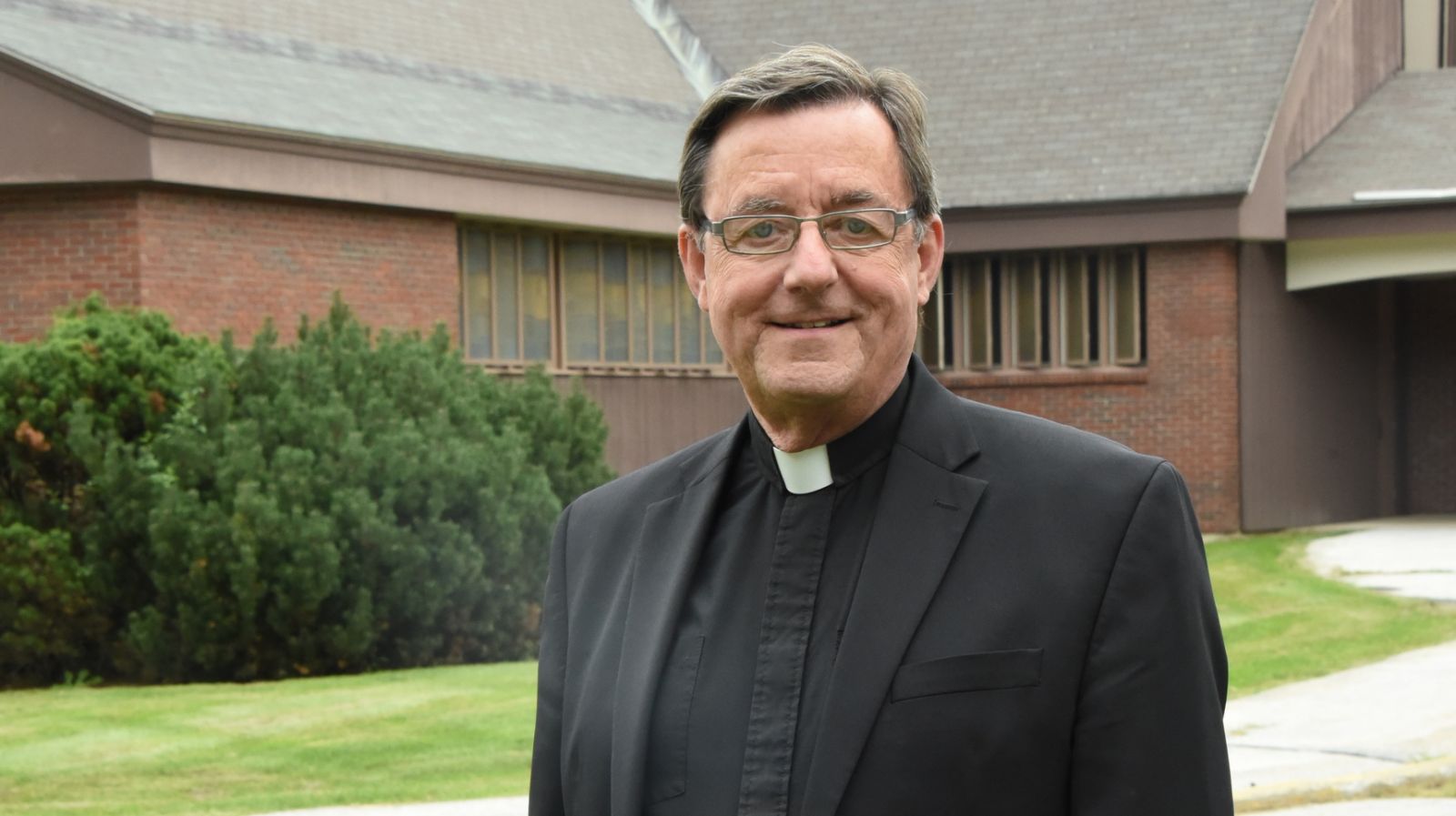 When Father Frank Murray retired from active priestly ministry in August 2020, one of the well-wishing signs in a send-off parade read “From vocation to vacation.” A year and a half later, while Father Murray has enjoyed some time off, he, like many of the diocese’s older priests, find themselves still very much in demand and, as a result, still hard at work.

“There are enough things for me to keep myself busy,” Father Murray says. “I am pretty active.”

Most recently, Father Murray has been serving in hospital ministry and helping at Prince of Peace Parish in Lewiston, but it also hasn’t been unusual to find him on the Mass schedule at St. Paul the Apostle Parish in Bangor, his hometown. He also has regularly served at Our Lady of the Snows Parish in Dexter and St. Agnes Parish in Pittsfield, filled in at Our Lady of the Eucharist Parish in Lincoln, and last summer, he celebrated the Saturday evening Masses at Our Lady of the Lake Church in Dedham, a summer mission of St. Joseph Parish in Ellsworth.

“I’ve ventured quite a ways, too. I’ve also been to Norway / South Paris. I’ve been there a couple times since I’ve retired,” he says. “The weekends don’t seem quite right if you’re not with a bunch of people celebrating Mass.”

Father Murray is also the chaplain of a Knights of Columbus council and friar for the fourth degree Knights, and he serves on the Northern Light Eastern Maine Medical Center Chaplain Advisory Board, the Diocesan School Board, and the Diocesan Presbyteral Council.

“I am still a project in motion. I haven’t gotten it quite all worked out yet. I’m trying to get better at clustering things and then having a break, instead of spreading things out and therefore not using my time as efficiently as possible,” he says.

While his schedule can easily fill up, Father Murray doesn’t seem to mind because he says he still derives as much joy out of the priesthood now as he did when he was ordained in 1981.

“I’m just as excited about presiding at someone’s wedding as I was 40 years ago, and I’m just as interested in kids at their baptism or at their graduation from grade school. Most of our pre-K programs have a graduation before the kids head into kindergarten or first grade, and I enjoy seeing how excited they are about their accomplishments and enjoy being part of those celebrations. Even funerals, I still see it as a privilege, meeting with the family ahead of time and talking about what needs to be said about the deceased, going through the funeral, helping people participate who haven’t been participating in the church in recent years,” he says. “The positive to me is being able to really connect with people in significant ways.” 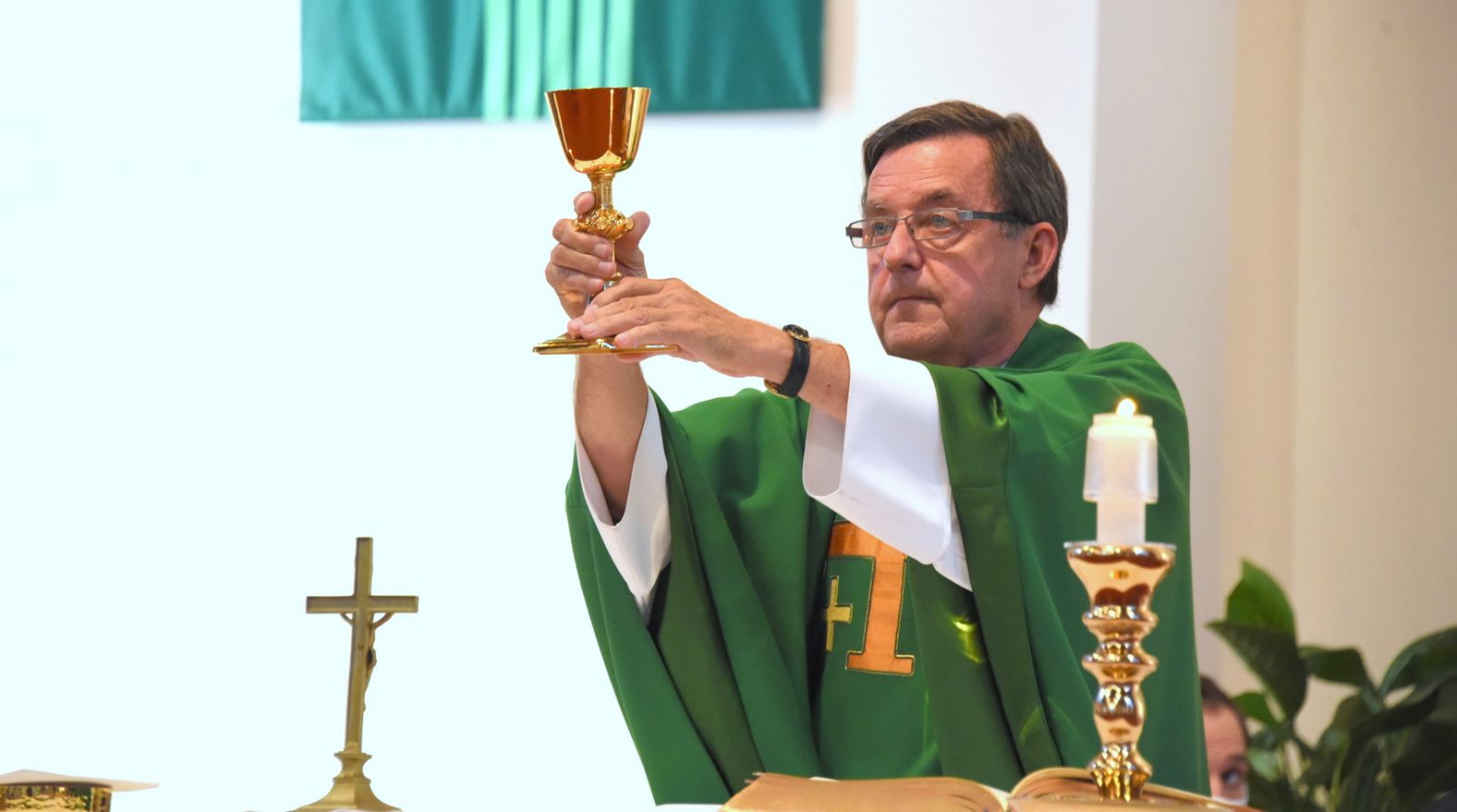 Father Murray has long felt a call to service, but that originally took the form of politics. In 1970, less than a month after his 21st birthday, he filed nomination papers to run for the state legislature, a race he won. Still in his senior year at the University of Maine in Orono, he was the youngest state representative at the time.

After serving two terms, he ran for the state senate but was defeated, followed by a one-vote loss a month later in a bid to become secretary of state. Already doing some teaching at his alma mater, John Bapst High School in Bangor, he then became a full-time teacher and track coach.

It was while at John Bapst that he began to give the priesthood serious consideration, although he says there wasn’t one defining moment.

“Everyone might hope to have sort of a St. Paul conversion, when you’re knocked off your horse, but it’s usually much more gradual, and I gradually came to the conclusion that while public service and teaching were good things, I was looking for something more,” he says.

He explains that as a lawmaker you work on legislation that you hope will help people, but you never get to really know the individuals you’re helping, something the priesthood offers.

What also helped him decide to pursue the priesthood was the knowledge that he would have time to discern whether it was truly his call.

“I knew I had at least four years of school ahead of me, so it wasn’t like I was making an absolute choice,” he says.

In fact, Father Murray says that three close friends at seminary did leave. He, however, chose to stay, a decision that affirmed that he was on the path that God had chosen for him.

“I became more and more convinced that this was for me,” he says.

During his years of active ministry, Father Murray had six major assignments. He spent six years in hospital ministry, followed by seven years in campus ministry at the University of Maine in Orono. He then served at parishes in Bangor, followed by parishes in Auburn, Mechanic Falls, and Norway, then at All Saints Parish in Brunswick, and, finally, back to his roots at St. Paul the Apostle Parish in Bangor.

“Every one of those was pretty different, and yet, all of them were great invitations into people’s lives. Sometimes, you came in at high points in their life and got to know people through their joys and successes, and at other times, you came into their life when it was falling apart or ending; yet, you still got to really know them,” he says.

Father Murray says it never took long to feel at home in any assignment he had.

“It was tough to leave every one of them, but I didn’t have to be at the new one very long before I realized, oh, this has got its challenges and its amazing people just like the last one did, even though it’s different,” he says.

Although you wouldn’t know it from seeing the way he easily settles into conversations with people, Father Murray describes himself as an introvert, saying it is something he still works to overcome.

“I’m conscious of the fact that I need to engage people and to try to let them know that I see them and am interested in them. I don’t think it’s that hard to do, even though I’m not naturally that way. I just try to make sure I’m conscious of not letting people just walk by,” he says.

“He is loving. He cares about people. He helps people,” says Rita Spinney, one of the sacristans at the church.

Father Murray admits that clustering, which came along about halfway through his years of active ministry, made getting to know parishioners more challenging because of the need to travel from church to church. He recalls, for instance, that when he was growing up in Bangor, there were 14 priests assigned to the six area churches. Now, there are two.

“People tend to go to Mass less than they used to. They go to more, different places than they used to, and you’re not at those places as often. So you do the math, and you realize that someone can be practicing their faith very faithfully, and you might not see them, even though you’re their pastor, a half or a quarter as many times as you did in the past,” he says.

Despite the challenges, he sees clustering as something fundamentally positive.

“I think the real beneficiaries of clustering are the smaller churches, because if we hadn’t done something, those churches would have been closed by now, and they’re still open, and there is a relatively stable community that worships there, and a small town has a Catholic identity,” he says. “Clustering helped us to realize that we need to be working together. We don’t need to be competing.”

Father Murray says one of the big pluses for him during his years of ministry was that all his parish assignments included a Catholic school.

“I have been fortunate. For 26 or 27 years, I have been directly involved with trying to keep our schools vibrant,” he says. “Some priests aren’t in a parish with a Catholic school their whole career, and I happened to have one in all four of my parish assignments, so obviously, they’ve been a big part of my life, especially since I am also the product of a Catholic education. The only four years I wasn’t in a Catholic school was when I attended the University of Maine.”

Father Murray say it’s important that we recognize the value of our Catholic schools and that they are more than just private schools.

“It’s a parish school, and the parish needs to remain committed to it, just like the school needs to remain committed to the parish. There is a lot of work coming from both angles, but there are a lot of benefits because we have a group of kids who are not only getting education about the Lord at home or in their church; they are also getting it at school, and that really helps the parish,” he says. “The schools are very life-giving. If you’re hanging around them, hopefully you’re not being drained of your energy; you’re been energized.”

Whether through a Catholic school or other ministry, Father Murray stresses the importance of supporting the youths of our parishes.

“No one questions the parish if someone is sick and the priest or a layperson from the parish is going to the hospital to bring the Eucharist or a priest is going to anoint a person, but I think it’s also vitally important they we’re trying to do everything we can for our kids, whether it’s a school, or whether it’s religious ed., or whether it’s youth ministry. We need to be just as committed to that ministry as we are to visiting the hospitals,” he says. “We need to be forming future leaders, not only for the Church but for our community.”

Knowing what a life-giving influence the Church has been in his own life, Father Murray says what he has found most difficult during his years in the priesthood is knowing that for some people, that hasn’t been the case.

“It’s hard for me to see how many people in our tradition started out the same way I did and haven’t benefited the same way that I benefited from it. They really are Catholic in name only or maybe not even Catholic in name only. I feel badly that, for one reason or another, the Church hasn’t supported and bolstered and sustained them the way that it has for me,” he says. “Being a leader in the Church, you sometimes feel responsible for that. What aren’t you doing that you should have been doing better so that the Church would have meant more to all these people?”

While it can be discouraging to see so many people no longer practicing their faith, Father Murray does not take a pessimistic view of the future of the Church.

“I suspect that we’re not as stable today as we were in the 50s and 60s. So will it still have the ability to survive? I think my learning about the Church and the history of the Church tells me that, yes, it will, but maybe not the same way it has for the last 60 or 70 years,” he says.

Father Murray says it’s important to remember that through the graces we receive from Scripture and the Eucharist, we have what we need to bring God’s presence and goodness to others and to a world that desperately needs it. As he told parishioners in a recent homily: “With our yes to His commandments, great things are accomplished.”