Embracing a commitment to a life of service 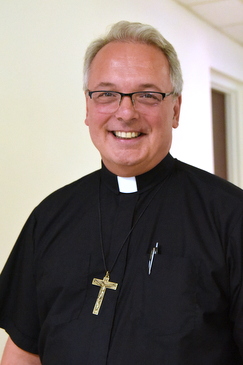 wo men who have long served the community, one through the United Way and the other through parish and campus ministry, are among the Diocese of Portland’s newest permanent deacons.

“I am called to be a sign of the Church at work in the world through service that is connected to and flows from our worship at the altar,” Deacon Frank Daggett says.

“Being a deacon means being of service to others,” says Deacon Thomas Blatz. “It’s a way for me to serve the community in an even greater capacity.”

Deacon Blatz, who lives in Wiscasset, serves at All Saints Parish in Brunswick. Deacon Daggett, a resident of Raymond, serves at the Cluster 30 parishes of St. Joseph in Bridgton and St. Teresa of Calcutta in Norway.

For Deacon Daggett, an early foundational moment was receiving the sacrament of confirmation, both because of the classes and an emphasis placed on service.

“It just helped me to see my vocation as a baptized Christian, a confirmed Christian,” he says. “It just kind of clicked with me that what we’re called to do is to serve our neighbors as Christians, and it stayed with me ever since.”

He attended Saint Joseph’s College of Maine, majoring in math and French, but says during those years, he pushed his faith aside, believing he could figure out the answers to life’s questions on his own.

“I see now what a ridiculous idea that is because people have been thinking about this for thousands of years,” he says. 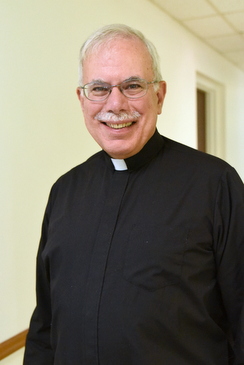 “It touched my heart, and it kind of reawakened me,” he says. “I remained more deliberate about my faith, both practicing it, certainly going to Mass every Sunday, and also taking more time for prayer and reading about the faith, about what it means to me, so really developing that interior life.”

After college, he briefly taught at a school in Connecticut, then decided to follow in his father’s footsteps and join the U.S. Navy.

His 20-year career took him and his wife, Barbara, whom he had met in college, to bases around the country and to Canada.  Wherever they went, they remained connected to the Church.

When he left the Navy, the couple decided to live in Maine. They were still getting settled when the September 11th attacks happened.

“It made me think, ‘What is this all about? What am I called to do?’” he recalls.

He says a week later he was at a Boy Scout troop meeting with his son and decided to volunteer, becoming an assistant Scoutmaster and then a troop committee chairman.  Although some of the boys had no religious background, he says sitting around the campfire and gazing upwards often led to reflection.

“I call it the Psalm 8 effect,” he says. “When I see the stars, the work of your hands, the moon and the stars which you arranged, what is man that you keep him in mind?”

He was hired to teach online courses at Saint Joseph’s College and then became an advisor. He says it made him realize that he liked talking to and helping people and that people seemed to like to talk to him. 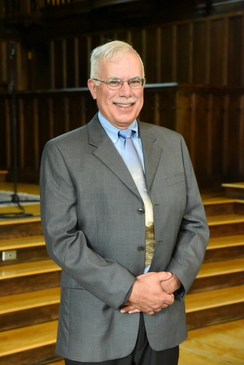 "You can see the path that led me to the diaconate, but I had no idea until very late in the process that that's where I was headed,” he says.

While working at the college, he decided to take some graduate level courses and earned a master’s degree in theology.  As he was nearing the end of his studies, the question of the diaconate arose.

“People started saying to me, ‘Frank, have you ever thought about being a deacon?’ I said, ‘Well, what’s that?’ because I had never seen a deacon before.”

Another class of permanent deacons had begun, so the opportunity wasn’t there, but he started a job that connected him more directly with Christ’s call to serve. As coordinator of social justice and leadership for the college, he arranged the Spring Break Workfest and other mission trips.

After that, he become director of campus ministry, which included catechesis and pastoral outreach.

“It was realizing what a difference it made to people,” Deacon Daggett says. “It was very fulfilling.”

When the diocese started a new class of deacons, he applied.

Deacon Daggett now serves as the Catholic chaplain at Bates College and as
a pastoral life coordinator for the Cluster 30 parishes. While he held both positions prior to his ordination, he says there is a difference now.

“What one of the priests told me along the way is, ‘When you do this as a deacon, you're doing it as a sign of the Church in the world.’ And I thought, ‘Wow, that’s a big responsibility,’” he says. “Now, I’m taking on a pledge to do this for as long as I'm able, to be a sign of the Church." 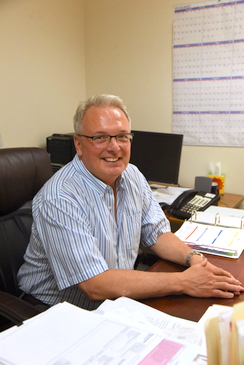 Deacon Blatz says he probably first felt a call to the permanent diaconate about 20 years ago but pushed it aside due to the busyness of life.

“I tell people that God called me many times, and every time, I would find an excuse,” he says.

A graduate of Rutgers University with a degree in political science, he owned a successful lawn care company, which had grown out of mowing neighbor’s lawns beginning at the age of 12.

Although he never drifted entirely away from the faith, he says he became more fully engaged in the Church after joining the Fathers’ Club when his son, Ben, began kindergarten at the parish school. It led to him and his wife, Mary Kay, to become increasingly active, and he was invited to join the pastoral council.

Although he felt the Lord calling him, he says he came up with hundreds of reasons why the timing wasn’t right. A turning point came when he and his sister took their father to a spiritual labyrinth run by the Sisters of Mercy.

While it was intended as a gift for their father, Deacon Blatz says it turned out be a gift for him as well. It was there that he decided to make a change in his life, beginning with moving to Maine, something Mary Kay, who spent childhood summers with her grandparents in Tenant’s Harbor, had always wanted to do.  He calls it a leap of faith because the couple moved without having jobs.

“The Lord provided. I know he did,” Deacon Blatz says.

He first worked for MBNA and then at L.L. Bean, taking second jobs for extra income.  While at L.L. Bean, he was one of four employees chosen to be "loaned" to the United Way of Mid Coast Maine.  For 11 weeks, he worked on the agency’s campaign drive, while being paid by L.L. Bean.

“My eyes were opened to the incredible need in the community,” he says.

Not long after, he was hired by the agency as campaign director. Although the United Way is a secular agency, Deacon Blatz says he sees the presence of Christ in his work.

“Where I encounter him is not always in the quiet whisper; it’s in the everyday banter of my everyday life and seeing the people whom I come in contact with, whom I am called to serve,” he says. 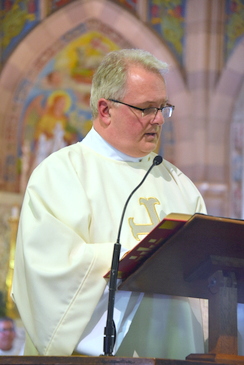 His new position allowed him to give up his second jobs, which freed him to finally say yes to the Lord.

Already active at All Saints Parish, including serving on the Cluster Planning Committee, which led to the parish’s formation, and then on the new parish's first pastoral council, he applied for the permanent diaconate.

He says although there have been times of doubt, something has always pushed him back on the path.

“I certainly did grow,” he says. “It made me more aware of His presence in my life.”

Both deacons credit their wives for their support throughout their journeys and in their current ministries.  Deacon Blatz and Mary Kay have led marriage preparation at their parish.  Barbara helps Deacon Daggett in his campus work.

While Deacon Blatz says he has most enjoyed preaching, Deacon Daggett says, even though it’s something he could do as layperson, what means the most to him is bringing Communion to people.