A drive to rebuild God's Church 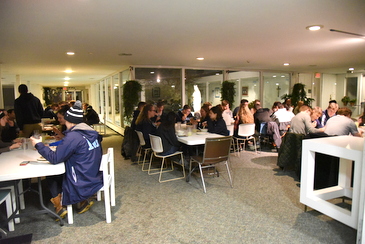 Freezing rain is falling, but that hasn’t stopped nearly 60 college students from strolling and steering their way to the Newman Center on the University of Maine campus in Orono.  They’ve together to enjoy each other’s company as well as one of the center’s Wednesday Night Suppers, a free meal offered to anyone who stops by.

The suppers are just one of the many ways the Newman Center seeks to support and build a Catholic community on campus. There are also other social events, Masses followed by meals on Sunday evenings, Bible study groups, guidance from FOCUS (Fellowship of Catholic University Students) missionaries, eucharistic adoration, and service opportunities.

“It’s a great place where I have found my best friends,” says Jake Gebhart, a junior and president of the student club Black Bear Catholic. “When you’re with a group of people who want you to grow in your faith, and are pushing you to be a better person, and are growing in your faith with you, you’re going to thrive.”

“It was very important that there was a Newman Center or a Catholic center close by when I was searching for colleges because I didn’t want to feel like faith was just something that I was gripping onto; it was something I wanted to grow,” says Katie Dube, a junior and vice president of Black Bear Catholic. “I’ve definitely been able to do that here.”

“I consider this place my third home. I have my home back in Arundel, and then I have the place where I live here, and then this place,” says Jacob Buttarazzi, a junior. 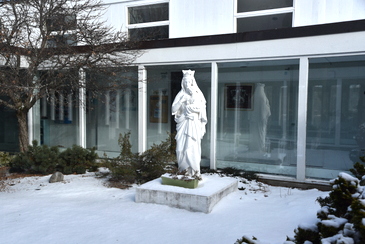 Since the first Newman Club was established on campus in 1946, tens of thousands of students from across Maine and beyond have found a sense of belonging there.  Students first gathered in a home, then in a chapel known as the “Log Cabin.”  It remained in use until 1971, when the current Our Lady of Wisdom Newman Center began welcoming students.

At the time it was built, the center was touted for its innovative design, with a central courtyard, different roof heights, and numerous windows. Unfortunately, it proved not to be a match for Maine winters.

“Climate-wise, this building was all wrong for Maine,” says Father Wilfred Labbe, pastor of the Parish of the Resurrection of the Lord, of which Our Lady of Wisdom is a part. “There is no insulation. It’s rotting. There are issues inside and outside the building with condensation. It was a beautiful building that was built in the wrong place.”

Additionally, the center only has a limited area for social events and what little room exists is not separate from the worship space. As a result, when those evening meals are held, tables spill over into the rear of the church.

“It doesn’t meet our needs. We need a space for worship, a space that is sacred, but we also need space for social events and gatherings,” says Father Labbe.

Realizing the necessity of preserving the center, as well as ensuring the vitality of the parish’s other three churches, the Parish of the Resurrection of the Lord launched, “Rebuild His Church,” a $3.5 million-dollar capital campaign.

“This is the right time and the right thing to do,” says Father Labbe.

The restoration work that will be done includes repairing the buttresses at Holy Family Church in Old Town, which are showing the effects of more than 150 years of freezing and thawing.

“I think one of the most beautiful churches in our diocese is Holy Family Church in Old Town, so to preserve that church is important,” says Father Labbe.

There will also be some interior painting at Holy Family, and the church’s parking lots and driveways may be repaved.

At St. Ann Church within Penobscot Nation, the tin ceiling will be restored, the chimney rebuilt, and the parking lot repaved.

“The church on Indian Island has been there forever. It’s a historical building. I love that little church. We’re bringing it up to its proper condition,” says Father Labbe. 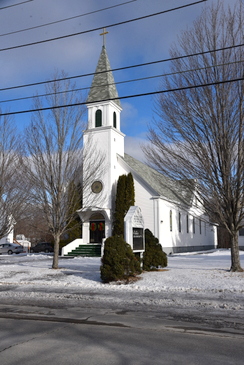 And at St. Ann Church in Bradley, the focus will be on regrading the parking lot, which has poor drainage, resulting in ice buildup during the winter.  The church will also have oil tanks replaced and roof work done.

“The people there have taken very good care of their church, so again, it’s mainly cosmetic and not structural,” Father Labbe says.

The parish estimates that work at the three churches will cost approximately $1.3 million. The remaining $2.2 million will go to where the need is the greatest, the Newman Center.  Renovations to it will be extensive and will include evening out the roofline, installing weather-resistant siding, putting in a commercial kitchen, and removing the center courtyard to create a new hall.  The hall will be separated from the worship space, which will be raised so that it is all on one level, making it more accessible to those with mobility issues.

“Right now, Masses takes place at the lowest point in the church rather than the highest point, so instead of your eyes being drawn up, they’re drawn down.  The new design will change that,” explains Father Labbe.

The worship space will also be reconfigured to make it look more like a church than it currently does. Plans call for the installation of stained-glass windows from the former St. Ignatius Church in Sanford on the outside and the use of windows from the old “Log Cabin” on the inside.

“We’ve done a great job here of building a community and making people feel at home. Now, we need to be a visible sign of not only being a home but being a Christian home, being a home where people who are searching for the truth can say, ‘Jesus is there, and there is truth,’” Father Labbe says. “It is so important for us to be able to be a witness in every possible way -- in word, in deed, in structure -- that this is an unchanging reality. This is where truth is. There is where you find love.”

Students who spend time at the Newman Center say they are excited about the possibilities.

“There is that completely empty space in the middle that is never used. It looks kind of cool, but we could definitely use more space to maybe have a formal or some sort of dance, or to have more events and larger dinners,” says Jake.

The students emphasize the difference the Newman Center has made in their lives.

“Coming into college, I had a sort of vague sense of faith. It wasn’t terribly important to me. I was also really struggling with a lot at the time, so freshman year was kind of rough for me. But the Newman Center provided a place that allowed me to learn more about my faith and helped me get a sense of purpose that I couldn’t find anywhere else,” says Jacob. “I noticed that the more involved I got, the better my life got, the happier I was as a person. So, I lead a men’s group now,” says Jacob.

“I’ve been part of Bible studies. I’ve led Bible studies. I’ve had opportunities for leadership positions within our group here, and I’ve definitely, definitely grown.  I really don’t know what I would do without this group of people or this community,” says Katie. “I’ve had friends who weren’t certain about faith at all, and I invited them to Bible study. While my friend isn’t Catholic, she is turning to the Christian faith and starting to ask some questions. I’ve been able to have some honest answers for her. We grab coffee. We talk here. It’s truly a wonderful place to be.”

Father Labbe says it is impossible to underestimate the importance of having a Newman Center that is active and inviting.

“I think young people are drawn to what is most attractive to them, and our competition -- worldliness, relativism -- they do a better job of presenting themselves as attractive than the Church does,” he says. “It’s estimated that up to 80% of students who show up on campus with faith, leave without it.”

“Holy Family Church stands at the top of the hill, and when you’re driving through town, to look up and see that cross there and know that Jesus resides there, that is important.  It is important on the tiny island of Penobscot Nation and in Bradley that these places exist and continue to be signs of hope.  And it’s vitally important that the Newman Center be here.  It is Jesus telling us go and do this mission, and to do otherwise would be denying our responsibility to do the work of Jesus,” Father Labbe says. “When you’re asking for money for something noble, and virtuous, and important in our pursuit of holiness and extraordinariness, then it’s not that hard. I have the grace of the Holy Spirit behind me. I know what I’m doing is for the greater glory of God.”

How you can help:

For more information, email Fr. Bill Labbe at [email protected] or call 207.827.4000. To make a donation, visit www.resurrectionofthelord.org/weshare.  Checks may also be sent to Parish of the Resurrection of the Lord, 429 Main Street, Old Town, ME 04468. Please note that it is for the “Rebuild His Church” campaign.