A Diamond of a Daughter 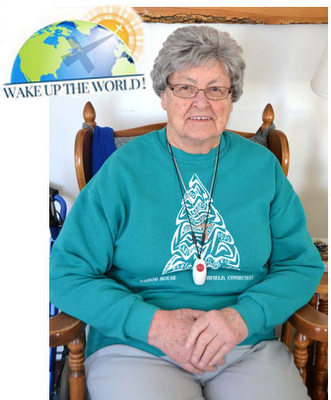 At a friend’s urging, Sister Aurelie Michaud, D.W., responded to God’s call and entered the Daughters of Wisdom upon finishing high school in Saint Agatha.   It was a choice, she says, she would likely not have made without that friendly nudge.

“She begged me, and so I started thinking about it, and with much prayer and her urging, I followed her,” says Sister Aurelie. “I didn’t think I would be worthy of that, which is why I never talked about it until she broached the subject. I’m a little bit shy. I was shy then, too, but I just got on the train with her.”

That was in 1940, and Sister Aurelie has stayed on track ever since, serving the Lord and His people. She celebrated her 75th jubilee this February.

“I never regretted the call.  I was always happy wherever I went,” she says. “Each place that I went, there were other sisters, and we lived community life, which was nice.”

Through her seventy-five years as a Daughter of Wisdom, Sister Aurelie has taught children with developmental disabilities, cared for victims of Polio and, later, those with AIDS, and has served the homeless, economically disadvantaged women and children, and aging sisters.

After graduating high school, Sister Aurelie went to Ottawa, Canada, to begin her formation.  Although familiar with the Daughters because they had been her school teachers, she gained a greater understanding of the sisters’ charism. Founded by Saint Louis de Montfort and Marie Louise Trichet in early 18th century France, the Daughters of Wisdom are called to bring the message of Jesus, Incarnate Wisdom, to people experiencing injustice, violence, poverty and oppression, especially women and children.

“They taught a lot about wisdom, not the wisdom we think of but the Wisdom of Jesus Incarnate,” she says.

She says, however, that she always had a desire to be a nurse and was granted permission to pursue that. She attended nursing school, graduating in the early 1950s, and would work for 20 years at a residential orthopedic hospital in Port Jefferson, serving during the Polio epidemic.

After retiring from the hospital in 1973, Sister Aurelie provided medical care to sisters in Sound Beach, New York, before returning to her hometown where she did parish work and served as a visiting nurse. It wouldn’t be long, however, before she was on the move again, traveling to Appalachia in West Virginia where she served in a children’s clinic.

“We did everything,” she says. “They were very poor people, but the people loved us there.”

Sister Aurelie then returned to New York, where she worked in a homeless shelter and with people suffering from HIV and AIDS.  Even though she was the only Daughter of Wisdom there, she says she never felt more spiritually connected to her religious call.

“I was the closest to the Daughters of Wisdom that I had ever been,” she says. “I just loved it there. There was something about it that was making me closer to God.”

In the 1990s, Sister Aurelie again assisted elderly sisters before returning to Maine to work at the Wisdom Center in Lewiston, which served economically disadvantaged women and children.

“They would just come in and say, 'Oh, I want a cup of tea.' And they would have problems and would tell us about it,” recalls Sister Aurelie.  “I was teaching them crocheting and knitting, and they loved to do that because they would make themselves a hat or mittens or something.”

Sister returned home to Saint Agatha in 2008, where she continues to reside. She says her ministry now is one of “praying and presence.”

Although she has given her life to God, she still, at age 93, strives to deepen her relationship with Him.

“I just live my life by trying to be closer to God,” she says. “That’s about it.”