Deacon of the Year honored for his selfless service 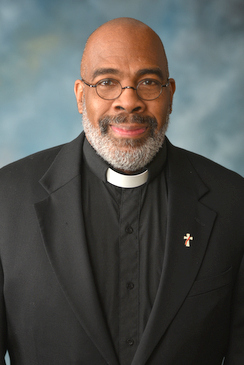 A prayerful and caring man.  That is how those who know him describe Deacon Darrell Blackwell.

“He is a truly humble, very spiritually filled man who has an amazing knowledge of the liturgy and all things prayerful and sacramental,” says Deacon Mark Tuttle. “He practices his spirituality constantly in the most humble way you can imagine. He is just a delight to be around.”

“He’s just as real as he can be. If you know him, you know him. And I just love that about him,” says Marla, his wife.

For his service in the diocese, Deacon Blackwell was honored with the 2018 Msgr. Charles Murphy Deacon of the Year Award, which was presented by Bishop Robert Deeley during the annual Deacon Assembly held in September. He was honored for
“working tirelessly in selfless service, while making Christ present to all those he encounters.”

“He is a person of integrity, a person who cares deeply about others, and a person who exercises his diaconal ministry with passion, in a spirit of humility and in simplicity, all anchored through the underpinnings of a rich prayer life that is centered on Christ,” says Deacon Peter Bernier, director of the Office of the Diaconate.

“I was really surprised, really surprised,” says Deacon Blackwell about winning the award. “I’m always grateful and blessed that I can be of service to the people, and it also means a lot coming from my peers.”

Deacon Blackwell has served at St. Martha Church in Kennebunk, part of Holy Spirit Parish, for 17 years. His ministry includes serving at the altar, sharing the word of God, and overseeing his parish’s nursing home and homebound ministry, bringing the Eucharist and a comforting presence to those he encounters. 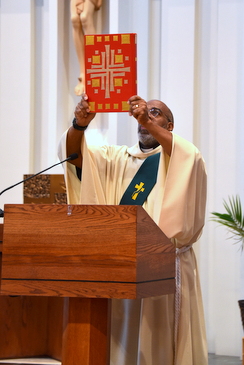 “I love those people. They mean a lot to me,” he says. “When you can enter peoples’ stories, you develop these relationships and friendships over lengths of time, and you get closer to them.”

He calls it a blessing to be with people during vulnerable times in their lives.

“It’s a grace for me to be the servant face of Christ. That comes more alive for me when I go to visit the nursing homes or are at committals,” he says.  “It’s a huge grace for me and a blessing that they let me enter their story. That’s how I see the ministry.”

Originally from Pittsburgh, Penn., Deacon Blackwell has been following his own spiritual path since age four.  That is when a childhood friend invited him to attend Mass. The son of southern Baptist parents, Deacon Blackwell says when he got permission from his dad to go, his journey into the Catholic faith began.

“When I came back, I asked my dad if I could become Catholic, and he said yes.  I don’t think my father had any idea what he was saying yes to, but he was openminded,” recalls Deacon Blackwell.

It proved not to be an early childhood whim. He was baptized soon after and continued to attend Mass with his friend. He remembers sharing his experiences with his parents, who did not follow their son’s path.

“I was actually bringing the Mass home to tell my parents what was going on, to show them,” he says.

When it came time for school, he attended a Catholic one.

“The Catholic schools had a really good reputation for being the best schools, and that is what hooked my mother.  So, when my brothers and sisters came along, they followed me and went to Catholic school.”

He joined the church choir and became an altar boy, continuing to serve through high school.

He recalls only a yearlong period, during college, when he fell away from the faith but says he was brought back to it when a friend of his father’s invited him to sing in the church choir. 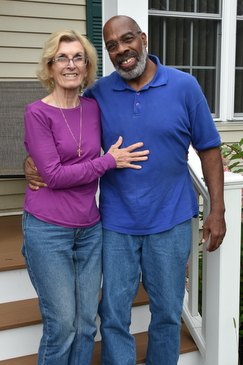 It was also music that first brought Marla to Mass.  The couple met after Darrell went to live with his father in New Jersey after college.  His parents had divorced about a decade earlier.  He remembers his dad pointing to the apartment upstairs where Marla lived.

“He was telling me there was a girl upstairs he wanted me to meet,” Deacon Blackwell recalls.

Although it took a while for their relationship to take root, Marla says she instantly knew there was something special about him.

For his part, Deacon Blackwell says he was drawn in by a cake, which Marla had baked to thank him for babysitting her daughter.

“It was the first of many, even to this day.  She was the only person, beside my family, who treated me the way I wanted to be treated, because I had a difficult childhood from the time when my family split,” he says.

When the couple met, Marla had no connection church connection.  She says her future husband didn’t push but, knowing her love for music, would play his guitar for her, including some beautiful church hymns.  Explaining that he was in the church choir, he invited her to midnight Mass at Christmas.

“It was very, very moving, very powerful,” she says. “I got in through the music, and after a while, I went through the RCIA.”

It was a learning experience for both of them.

“I told him, ‘If I am going to become Catholic, I’m going to understand what I’m doing and why I’m doing it,” she says. “I took it very seriously.”

It was while Marla was participating in RCIA that the thought of the diaconate first surfaced. He remembers asking questions of a deacon there.

A few years later, he felt the pull again, after a dairy farmer at the small country church they attended was ordained to the permanent diaconate. Deacon Blackwell says it led him to begin attending discernment nights. 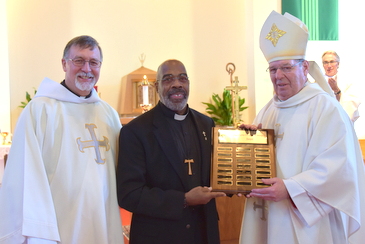 “I was involved in the music ministry, which I loved. I really wanted to be good at it and threw myself into it, but there was something about these men I saw,” he says. “The Holy Spirit touched me or prompted me in some way.”

He believes his parents’ example of service and his 30-year career as a service technician for Xerox also helped prepare him for the ministry.

“My job forced me to be a good listener because you always had to listen to what the customer was saying,” he says.

He entered formation in 1990 and was ordained on May 10, 1996, for the Diocese of Trenton.   Five years later, the couple moved to Maine, a place they had vacationed and grew to love.

In addition to his service at St. Martha Church, Deacon Blackwell played a key role in the establishment of the perpetual eucharistic adoration chapel in Saco. He is also a member of the Knights of Columbus, and he recently put together a guitar ensemble, with the goal of playing at Masses, prayer services, and events.

Deacon Blackwell says his ministry has always been a partnership with Marla.

“When you really see the diaconal ministry come fully alive is when you see that the husband and wife share it,” he says.

Marla has also been active at the parish, including holding regular training for lectors, tapping into her experience as a language arts teacher.

“When people see us, they see the diaconate in its fullness, and I hope they see the marriage covenant,” he says. “If she is a lector and I am assisting at Mass, that, for me, is the pinnacle.” 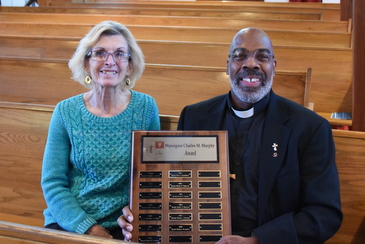 Marla says being the wife of a deacon is a ministry in itself, one that involves sacrifice.

“Any relationship with another person is a sacrifice because you’re always giving to that person. So, even though that’s the most wonderful part of it, it is also the hardest part of it because I have to share him all the time,” she says.

Recently, Marla has had to lean on her husband more.  Diagnosed with multiple sclerosis 50 years ago, her condition has slowly declined, making it harder for her to do some tasks.  She says her husband is a beautiful caregiver.

“He is so patient and kind, and he helps me in so many ways every day,” she says. “With the MS and everything, he has just been very supportive from the beginning.  And as I continue to decline, he has just been a great support to me, always patient as can be. That’s all I can say. He is just kindness and goodness.”

Marla says she is thankful for her husband and proud of him.

“All those beautiful, good qualities that I saw in him in the beginning, that attracted me to him, that’s what makes him so good at the ministry,” she says.