A calling to care for the dead 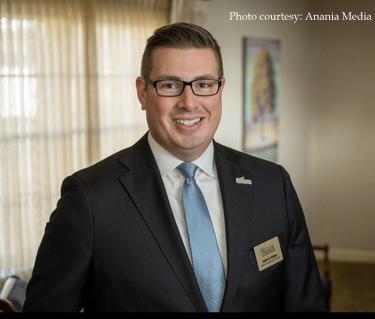 As the owner of Conroy-Tully Walker Funeral Home in Portland as well as Black Funeral Homes in Sanford/Springvale, Adam Walker knows well the importance of being a comforting presence to families who have lost loved ones.

“You’re helping people first and foremost by caring for the family and trying to compassionately guide them. You’re also helping families by giving them the peace of mind that their loved one is in the best possible hands,” he says.

Walker, who is a member of the Portland Peninsula & Island Parishes, says he sees his work as more than a job. For him, it is a vocation.

“I always say that I didn’t choose it; it chose me,” he says. “I wouldn’t rather be doing anything else.”

Walker says he always tries to care for the deceased and their families in the best way possible, but COVID-19 has heightened that sense of responsibility for him and his staff.

“We do feel that greater need to try to support people and to be there for people,” he says.

One of the most difficult things, he says, has been seeing the suffering of family members who were not able to be with their loved ones before their deaths, whether from COVID-19 or other causes.

“It’s awful,” he says. “We’re sitting down with families, and we’re hearing these heart-wrenching stories that their loved ones – mother, father, brother, sister, or whoever – passed away, and they weren’t able to be there. Only one person was able to go in, or the last time they saw mom or dad was through a window of the nursing home. That’s really, really sad.”

And while those family members were not able to be with their loved ones, now, others cannot be present to comfort them, at least not in the same way as before the pandemic. There are no hugs, no held hands, and no large gatherings for vigil services or Masses.

“Sometimes, the biggest support that a family can receive is just somebody’s physical presence, not necessarily even saying anything but that hug or just sitting shoulder to shoulder with somebody. That physical presence is a huge source of support, and in this time, you can’t have that,” Walker says. “That’s been the truly heartbreaking aspect of all of this. I truly feel that, unfortunately, this virus is robbing families of that need for physical support.”

Walker says he and his staff have done their best to adapt to the situation and to give people a sense of security. There are hand sanitizing stations, masks are required, and a staff member stands at the door counting attendees. Early on, when gatherings were limited to just 10 people, it meant having family members enter one group at a time, with just one staff member accompanying them.

“We would have nine family members come in, say their goodbye, and have a brief prayer. Then, they would leave, and nine other family members would come and say a prayer and then leave,” he explains.

The funeral home has also livestreamed services, and it started a program called “Hugs from Home,” in which people could call the funeral home to deliver messages of hope and encouragement or share a prayer.

“We would take that message and tie it to a balloon and tie the balloon to a chair, so when the family walked in, they would see a room full of balloons representing all the people who wished they could be there,” he says.

In some cases, especially in those early days, there were no services at all. Walker remembers, for instance, someone who died from COVID-19, and the only ones present at the burial were the priest and funeral home staff because cemetery rules at the time prohibited others from attending.

“She had made such a positive impact on this community, and for no one to be allowed at her funeral was heartbreaking,” he says.

Walker says they encouraged families who did not have services to schedule them later on, fearing that, otherwise, they would be deprived of needed closure. He says while some have done so, others have decided not to, something he believes they will regret

“I’m not a psychologist or a grief therapist, but my professional opinion is that it’s going to be harder down the road. You’re going to come to that year anniversary, and you’re going to feel like you did your loved one a disservice because you did not honor them. I fear that it’s going to be that much harder on you and your family members,” he says. “Emotionally, people need to be able to say goodbye. People need to have that opportunity to be there to support one another."

He says that is why a vigil service is the first of three parts that make up Catholic funeral rites. He says he tries to emphasize the importance of having all three: a wake to gather as a supportive community, a Mass to pray for the repose of the eternal soul of the deceased and to provide the living an opportunity to mourn their loss, and the committal service to reassure us of the promise of resurrection.

“The visiting hours are important because that is where you come together to pray for the deceased and to gather as a family. It is important to have a period to prayer. The Mass is important because it’s thanking God for that loved one, for that life. It’s honoring God. Then, the burial is important because, from an emotional standpoint, it gives you a permanent place to pay tribute and memorialize the one who died,” Walker says. “It’s our Catholic faith and belief that when we bury our loved ones, they’re going to be raised up on the last day.”

Walker emphasizes the need to treat the bodies of the deceased and cremated remains with the same respect given to the living.

“The Church teaches that we need to have reverence for the body, so, in doing so, the Church’s preference is that if cremation is going to take place that it takes place after the funeral Mass,” he says. “The body is brought to the church and is blessed and has the white funeral pall placed over it, which represents the white baptismal garment the person wore on the day of their baptism.”

The Church also teaches that if someone is cremated, their remains should be placed in a worthy vessel such as an urn. Walker emphasizes that they should never be separated or turned into mementos such as jewelry.

“The practice of scattering remains on the sea or from the air or on the ground or keeping the remains at home is not the reverent disposition the Church requires,” he says.

Walker says one thing the coronavirus has shown is the value of making prearrangements for your funeral.  He says it is the only way to ensure your wishes are carried out, and it also eases the burden on grieving family members.

“COVID-19 has forced all of us to confront our own mortality,” he says. “There are so many people who haven’t had the opportunity to express their wishes or concerns.”

Conroy-Tully Walker has handled about 30 cases of people who passed away from COVID-19 and has also had situations in which the death wasn’t due to the virus, but a family member tested positive soon after the services. Thankfully, Walker says staff members have always tested negative, evidence, he says, that masks and the other steps they’re taking do work.

He admits it’s been a difficult time for him and his staff, but he says helping people is why he got into the business 17 years ago.  Originally eyeing a career in law enforcement, he says an afterschool job at a funeral home when he was a teenager led him to alter his plans.

“Once I got into this field, I recognized that it is still a field of helping, just in a different way, and that’s what really made me the most comfortable with it,” he says. “I was raised on the Golden Rule: treat others the way that you would want to be treated.”

Walker was brought up as a member of the Protestant Church but became Catholic six years ago, brought to the faith through his work and his wife, Caitlin.

“I was managing a funeral home down on [Cape Cod], and after a funeral one day, I went into the priest’s office and started talking with him, and he gave me a book entitled Rediscovering Catholicism. That’s when I really felt just a strong draw to the Catholic Church. Then, I met my wife whose family was Catholic, so aside from work, I started going to Mass with her,” he says. “It was just a feeling of being home.”

Although he says being a funeral director means making a lot of sacrifices, he thanks God every day for the blessings in his life and for the opportunity to serve others.

“There are unfortunate times when funeral directors and professionals, they’re getting up from the Thanksgiving dinner table, leaving their own family to care for another family. They’re missing Christmas morning with their kids because somebody passed away, and they need to help that other family out. All of those personal sacrifices though are always, in my opinion, worth it because you’re helping others,” he says. “One of the prayers that we say with our daughter is that we pray that God continues to bless us and uses us to be a blessing to others.  That’s why I’m so happy and content with this line of work, this calling.”

To help you make decisions about end-of-life care, the Diocese of Portland has produced "Three Beliefs, A Guide for Maine Catholics on End-of-Life Decisions.” The 20-page document includes Catholic teaching on end-of-life treatment, as well as an Advance Health-Care Directive for Maine Catholics.   The document is available online at www. portlanddiocese.org/ThreeBeliefs. You may also obtain a copy by calling the Chancery at 207.773.6471.