A bridge to the refugee community 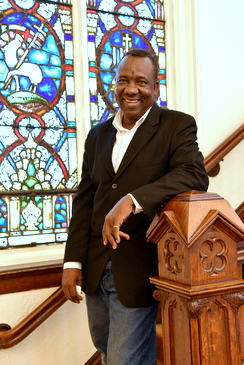 As he approaches the second anniversary of his ordination to the permanent diaconate, Deacon Michael Augustino says he feels privileged to have the opportunity to serve God.

“Everything is God,” he says. “To do the will of God through His showering of grace is a blessing.”

He sees it as his mission to try to draw people closer to Christ and His Church.

“I feel called by God to bring people to know and accept His mercy and love,” he says. “God framed it to put me as a local bridge between the community and the Church.”

Being a bridge between the Church and the secular world is a role that permanent deacons are especially suited to fill because, like Deacon Augustino, many are married, are raising families, and hold secular jobs.  They balance those commitments with their ministerial work, which includes sharing the Gospel, serving at the altar, and works of charity.

“I’m going to be there to help, as the bishop mentioned when he said, ‘Teach what you believe. Practice what you teach’ [Part of the Rite or Ordination]. That is all the way. Preach the Gospel and walk with the people, especially with the immigrant people, who I stand behind to help them be stronger in their faith,” he says.

Deacon Augustino says he feels especially called to serve the refugee and immigrant community because of his own background.  He arrived in Maine in January 2000 from Cairo, Egypt, after fleeing Sudan.

Deacon Augustino was born in Yambio, South Sudan, in a predominantly Christian area.  He was raised in a Catholic family, the oldest of eight children, but when he was a teenager, his father, aware of growing civil unrest, sent him to the northern part of the country to continue his schooling. (South Sudan had not yet gained independence.) Deacon Augustino first stayed with a friend and then with an aunt.  A priest at the cathedral in Khartoum also befriended him.

“I was helping to teach the kids sometimes, working like an altar server,” he says.

At one time, he says he considered entering the seminary, but his parents had arranged a marriage for him, something he says is customary in his homeland.

After high school, he briefly attended the University of Khartoum, but left, feeling uncomfortable because of Muslim-Christian tensions.

“It was a little bit of a confusing life,” he says. “The good thing was my priest. He was always guiding me.” 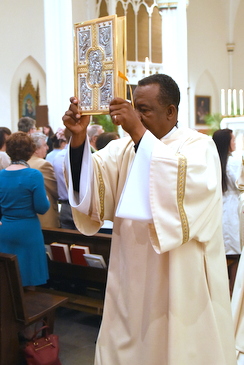 He says the priest helped him get a job as an interpreter at the American Embassy. Deacon Augustino speaks several languages including Arabic, Azande, and English.   He also began handling logistics for the United Nations Development Corporation (UNDP).

Deacon Augustino says he was beginning to settle into his new life when he learned that his mother, father, and one of his siblings were killed in the bombing of a school where his father was the headmaster. Devastated, he was not even able to return home to mourn because of the violence.

His own life would soon be endangered as well.  Because of his work for the United States, he says he was among dozens arrested by the Sudanese government following the 1998 U.S. bombing of a plant the Americans suspected of making chemical weapons.  Accused of betraying their country, he says the detainees were placed in a small room that was so hot, many died the first day. He says he was fortunate to be near an outside wall and able to breathe.

According to Deacon Augustino, the detainees were taken for questioning in groups of 11.  The seventh in line, he watched as those before him were questioned about their faith. He says refusing to answer or identifying yourself as a Christian was a death sentence.

“They question you, and you respond, like you are debating,” he says. “They ask you again, and you continue to say no, and they shoot you.”

Deacon Augustino says he considered what he would say but knew he could not denounce his faith. Fortunately, when they came to the fourth person, United Nations representatives intervened.

Deacon Augustino says he spent three months in jail, but even when freed, he did not feel safe.

“You don’t know, at any time, if someone is going to attack you,” he says.

He remembers turning to God.

“I was praying three or four times a day. I was so glad for my life,” he says.

Making changes to the spelling of his name, he was able to get the papers needed to go to Cairo, Egypt.  He and his family remained there for approximately six months before being granted refugee status by the United States.

Just two days after arriving in Portland, he found his way to the Cathedral of the Immaculate Conception. 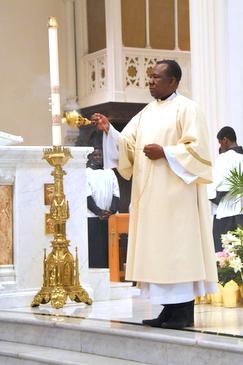 “When I entered the cathedral, I started to cry because God really looked after me,” he says. “My spirit started to come back.”

He approached Father James Nadeau, rector at the time, asking him if he could help in some way.

“I started to feel, how am I going to give back to God for all He had done?” he says. “I said I need anything that would connect me to the Church.”

It led him to begin working as liaison between the Church and the refugee/immigrant community, often going to people’s homes to meet with them.

“I started to say to them, ‘The Church is here, and we are here as a family, so people started to come, and their numbers started to increase,” he says.  “I tried to create a program that, every Saturday, we have prayer together in their dialect.”

At first, they gathered in homes, then in an upstairs room at the cathedral, and now, there is a prayer service offered in Azande in the cathedral chapel on Sunday afternoons.

Deacon Augustino says he has also worked to help members of the refugee / immigrant community not only understand the importance of baptism and having marriages blessed in the church but the commitment that comes with those sacraments.

Additionally, he served as an interpreter, assisting at Maine Medical Center in Portland and the Department of Health and Human Services.  He worked to find American mentors for those newly arrived in Maine, and he tried to organize leaders in the refugee/immigrant community to help those needing assistance.

Deacon Augustino earned a bachelor’s degree in criminology and a master’s in development policy and practice, both with an eye towards helping refugees and immigrants better understand the law.

“People are coming from war zones, coming from different countries, and they see the police as the enemy, but I started to facilitate with them to interpret it the right way,” he says. 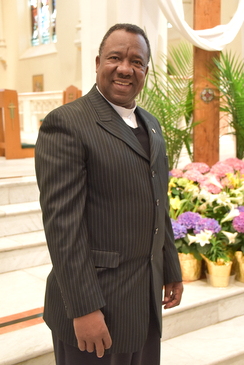 Not having permanent deacons in Sudan, Deacon Augustino says it was not something he dreamed of becoming.  However, once he learned about the permanent diaconate, he applied for it.  He says he was also considering pursuing a doctorate in legal studies, and it was his wife, Dozetta, who helped him to see the right path, reminding him that it was God who brought him here. He recalls her telling him, “‘Honey, if you become a professor, you will be helping us only, but you will not be helping other people. Am I right?’ I said, ‘You are right.’ She said, ‘Go to be a deacon.’”

In order to tackle the rigors of study for the diaconate, he gave up his job as a truck driver, with Dozetta assuming the financial burden for the family.  He is thankful to her and everyone who helped him on his journey.  Most of all, he is grateful to God.

“I thank God for this time and for this calling,” he says. “God saw how this was my dream, how I was feeling about the people, to put me there to lead those who are needing help.”

He says he knows that as permanent deacon, he is called to be a visible sign of the Church in the world.

“You are representing all the Catholic family. It is not only for yourself or for your family,” he says.

And while he says it is sometimes difficult to balance his secular job as a bus driver with his diaconal ministry, he knows no challenge is too great when you are doing God’s work.

“God called me immediately, saying come do this job for me. It is why I am very proud do this job, to embrace Him and thank Him,” he says.“It is a type of legacy from God. It is not like something you just created. It means God has something for me to do.”