Providing an avenue out of addiction 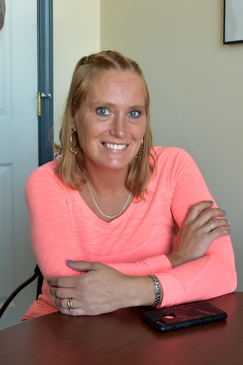 “Everything I thought I never could be, I am.”

That is how Tanya Salazar describes her life now, five years after she first reached out to Catholic Charities Maine’s Counseling Services.  Asked where she might be if the agency hadn’t returned her call that day and accepted her as a client, she gives a sobering answer.

Counseling Services, based in Portland, provides outpatient and intensive outpatient treatment to those with substance use disorders and/or mental health issues.  Oftentimes, the clients also have criminal histories related to their drug use. Some are referred by law enforcement agencies or the courts, others from medical practices, and some, like Tanya, reach out themselves.

“I had no luck getting into anyplace else, so I started coming here,” she says.

Tanya says she first tried drugs when she went to live with her father out of state at age 13. She says crack and cocaine use was common in the neighborhood where he lived.  About a year later, she returned to Maine to live with her mother but, at age 15, ran away from home with a man in his 20s, ending up in Virginia in an abusive relationship.

“He would lock me in a room, beat me, feed me oxycontin, and that is how I got really bad on them,” she says.  “I started doing coke again when I was 18, shooting it up.”

After six years, she says she was able to break free of the relationship, but her struggles with substance use remained. She was in and out of jail, staying clean for short periods, only to relapse.

Carolee Lindsey, director of cooccurring and substance use disorder services at Counseling Services, says that pattern is not unusual.

“It’s a chronic, relapsing condition,” she says. “Oftentimes, it starts as a choice, but through science, we’re discovering that the brain changes, and there is the craving and the compulsion and the focus on the use of the chemical regardless of the consequences. People don’t even see those things anymore, so it interferes with normal life events.” 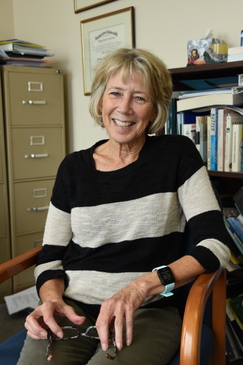 Tanya admits she first reached out to Catholic Charities only out of desperation.  Due to repeated failed urine screening tests, she says her doctor told her that until she got help, he would no longer prescribe her suboxone, a drug that can reduce symptoms of opioid addiction and withdrawal but can be addicting itself.

“I wanted help, but I didn’t want to do the work,” she admits.

She says, at first, she turned to Catholic Charities only looking to get suboxone, but Counseling Services ended up showing her the way to a better life.

“I went for the I.O.P. (Intensive Outpatient Program) because you had to do that. I hated doing that, but then, after the I.O.P., it was interesting the things I learned, and I liked it,” she says.  “I don’t think I was ready until after the I.O.P, and then it was, ‘Yes, I don’t want to live like this anymore. I want a different life.’”

When clients like Tanya arrive at Counseling Services, they receive a psycho-social assessment, which includes sharing their history of substance use and any previous treatment.  Catholic Charities then determines what type of approach might be best for the individual, following the American Society of Addiction Medicine patient placement criteria, which is based on six dimensions: behavioral risks, environmental factors, medical issues, motivation level, risk of relapse, and withdrawal risks.

The goal is to help people develop a new way of living so that they no longer need to depend on substances for survival.

“At some point, somebody has to stop and begin to develop other behaviors that can then rewire the circuitry, if you will, of the brain so that eventually the cravings aren’t as much. The compulsion might be lifted. It’s not an hourly fight; it moves to a daily fight and then a weekly fight,” she says.

Much of the therapy takes place in group settings, something Tanya found particularly valuable.

“With the group, you start making relationships, and you hear other people’s stories and that helps, knowing that you’re not by yourself. And you get comfortable with the group, and you can talk about things where, before, all my friends were users,” she says.

Counseling Services offers several different treatment programs, such as Dialectical Behavioral Therapy (DBT), for those having difficult with emotional regulation; a seeking safety group, for those who need help learning to set boundaries so they don’t put themselves in dangerous situations; a group for those with a substance use disorder and mental illness; and relapse prevention. There is also Moral Reconation Therapy® (MRT), a 12-step process to help those who have been in the criminal justice system develop better moral decision-making skills.

“It’s all about being able to recognize what it is that they’ve done, who they’ve caused harm to, or what the reparation is, and what the direction is that they want their lives to go into,” explains Carolee. 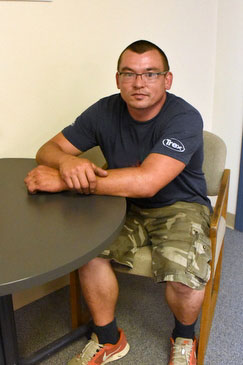 It was that program that struck a chord with Shawn Lee, who became a client of Catholic Charities through Cumberland County Drug Court.

“You have to be honest. You have to take a look at yourself,” he says. “The part I liked a lot is that you have to think about people who you’ve hurt in the past, what you do with your time, time management, and then, it talked a lot about setting goals and, then, actually putting deadlines on them. It’s cool because when I look back on when I went through MRT, all the goals that I set a year ago, I achieved pretty much 90 percent of them already.”

Another program he points to is criminal thinking.

“That was a good class because it made you think about your thought process and trying to get out of that process,” he says.

What has also helped, he says, is his comfort level with Dr. Mary Dowd, a physician, and Jay Burrows, a clinical counselor.

“They know who I was when I first came here and who I am today. That’s the big thing that makes me comfortable with them. They’ve seen me struggle and then they see where my life is today,” says Shawn.

“Having a doctor who actually cares and not just tries to get you in and out to the next person, I think that makes a big difference,” agrees Tanya.

Tanya says she used to marvel at friends she met through recovery groups who had stayed off drugs for four or five years, thinking, “I could never do that.”  Now, she has.

In 2015, she earned her GED®. She has a steady job, and she is no longer separated from her husband and is helping to raise her three children.

“My biggest fear was how do I be normal. How can I go to the school functions and talk to the other PTA moms and chaperone on field trips? And now I’m doing it,” she says. “Now, it’s nothing. We just talk about the kids. They’re just like me.”

Shawn says thanks to Counseling Services, he can live in the present and no longer have tolie about who he is.

“I can be who I am today and not have to basically live a double life because I feel like that’s how it was when I was a drug addict,” he says.

He says he is now more organized and has better communication with customers of his construction business.  He also looks to hire others who are in recovery.

“What I’ve gone through here has saved my life.  And at the end of it, I hope by me saving my life, I can save somebody else’s life, maybe not just through my helping hand but also from me leading by example,” he says.

If he had a message for those still struggling with substance use, he says it would be that it’s never too late.

“If you’re still breathing, you have a chance at a better life,” he says. “When that gift of desperation comes, when you want to change more than you want to remain the same, you should reach out and ask for help, because that’s how I know everybody in recovery has made it – by asking for help.”