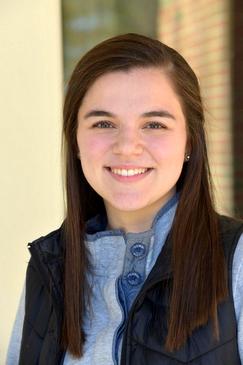 “When there are obstacles, it is not those who give up who succeed but those who are able to pick themselves up and push forward.”

Avery Greco says those are words she has tried to embrace throughout her four years at Saint Dominic Academy in Auburn, whether studying for exams, solving a problem on the math team, or competing in sports.

Daniella Niedermeyer, a senior at Cheverus High School in Portland, says she, too, always strives to do her best, letting her Catholic values be her guide.

“Trying to be a good person means a lot to me,” she says. “I think if everyone did that, it would make the world a better place.”

For their commitment to their faith, their desire to serve others, and their outstanding academic achievement, Avery and Daniella were chosen as the winners of the 2020 Lila Grace Sullivan Amirault Scholarships, each receiving $4,500 to put towards their college tuition.

“It was immediate excitement, immediate.  I read the email, and it was like, ‘Oh, my gosh,’” says Avery. “I was on the edge of my seat every day thinking about whether I got it or not.”

“I was very excited about it. It will make the financial burden a little bit easier to go to college,” says Daniella. “It’s just an honor, and it’s very generous of the family to offer this scholarship ever year.”

The scholarships are made possible through the Lila Grace Sullivan Amirault Scholarship Fund, which was established through the Catholic Foundation of Maine by the late Patrick Amirault in memory of his wife, Lila.  Amirault created the fund in gratit 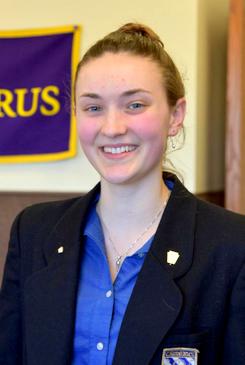 ude for the care and quality education he received when he attended a Catholic school in Massachusetts.

That appreciation for a Catholic education is shared by Avery and Daniella.

“I think St. Dom’s has done a great job preparing me for college. All my siblings went through St. Dom’s, and they’ve been so successful in college,” says Avery.

“It’s a very challenging curriculum, and it makes you work hard to really learn the material, which helps you build character,” says Daniella.

Both Daniella and Avery have grade point averages above 4.0, due to honors and AP courses, both are members of the National Honor Society, and both are on the math team, Daniella to brush up on her skills and Avery because it’s a passion.

“I love math especially. The headache you get after every math meet from thinking so hard makes me feel so accomplished,” Avery says.

There is no shortage of accomplishments for either Avery or Daniella. Avery is her class vice president and a member of the student senate, while Daniella was class vice president last year and is on the debate team.  Both also play multiple sports and both embrace service opportunities.

Daniella is the president of Cheverus' Key Club, which puts on a Turkey Drive every Thanksgiving, serving hundreds of area families, and she has cooked meals at one of the Preble Street Soup Kitchens in Portland.

“To be able to help provide that to somebody who can’t get it for themselves is a wonderful thing,” she says. “I think it’s especially fulfilling because the people are so grateful.”

She has also volunteered at the Maine State Society for the Protection of Animals, a Windham-based non-profit which cares for horses that have been abused.

Daniella and five other students also took the initiative to start a garden club at Cheverus, constructing raised beds. 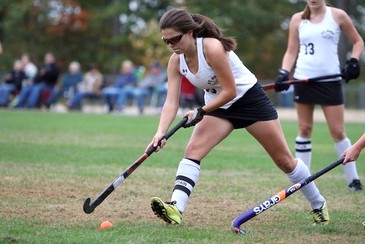 You can learn a lot of character lessons from gardening, like success and failure and that hard work pays off.  It’s just very simplistic in that way and very natural,” she says.

If they were able to grow enough, the students’ hope was to donate the produce to a soup kitchen.

Daniella is also active at St. Matthew Parish in Limerick, where she has served as a reader at Mass and volunteers at the annual Funshine Fair.

Avery has also volunteered at the Good Shepherd Food Bank in Auburn and at St. Mary’s Hospital in Lewiston, helped to clean St. Dom’s elementary school, helped start a volleyball / spike ball club at St. Dom’s, and through her participation on the tennis team, volunteered for Special Olympics.

“My job was to score games,” she says. “It was so fun to see them compete against each other and to see them get excited about getting a point. Then, they asked me questions about how it worked. I just felt so happy to be a part of such a great organization.”

Avery sees service as a way of putting her faith into action.

“Jesus worked every day to help others. That is one of His core teachings,” she says. “Through doing good for others, you’re able to see Jesus in every single person, and that’s super important.” 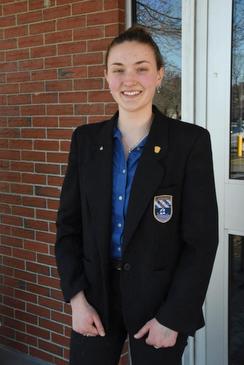 Both Avery and Daniella credit their high schools for helping them see the importance of keeping faith at the center of their lives.

“We really go into what the faith means…what it means in life and how you should try to be a better person through faith,” says Daniella.  “I think it helps me stay grounded.”

“For a lot of my religion classes, we’ve taken time throughout the year to go the chapel and just sit there in silence,” Avery says. “That is probably one of my favorite activities in religion class because, especially in high school, there is a lot of busyness, and you’re not really being given that set period of time to just sit in silence and think to yourself and think to God.”

Avery and Daniella believe that foundation of faith will serve them well in college.

“Because of my faith, I’ve grown a strong understanding of who I am and what I believe, so if I am challenged in college, then I can always look to Him, and I know He will show me the way,” says Avery.

Daniella plans to attend Loyola University in Maryland, where she will likely major in psychiatry.

“I want to continue going to a Catholic or Jesuit school just because of the community and the different service aspects,” she says. “I think theology and philosophy aren’t necessarily held to that high degree of importance in other schools, and they’re something I would like to have going forward.”

The Amirault Scholarship Endowment was established through the Catholic Foundation of Maine, which provides opportunities for people to create or contribute to charitable funds that support the work of the Church in Maine.  To learn more about those opportunities, contact Elizabeth Badger, executive director, at 207.321.7820 or [email protected]. You may also visit the Foundation’s website at www.catholicfoundationmaine.org.