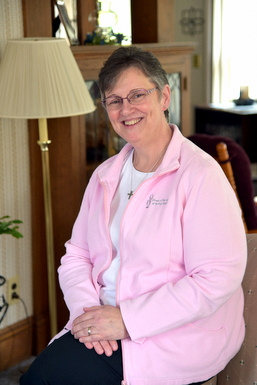 Sister Ann Theresa Boyle, RSR, says she feels a sense of ease and comfort, along with gratitude, after making her perpetual profession with the Sisters of Our Lady of the Holy Rosary.

“There is a calm, a sereneness, a peacefulness. It’s like this is where you belong,” she says. “I feel total acceptance by the community.”

Sister Ann says she feels called to live according to the congregation’s charism: “to manifest the tender and caring love of Jesus and Mary, His Mother.”

“My life now is all for God. It’s for His greater glory and love,” she says.

Sister Ann professed her final vows of chastity, poverty, and obedience in the presence of Sister Gabrielle Cote, RSR, superior general of the Sisters of Our Lady of the Holy Rosary, at a Mass celebrated by Bishop Robert Deeley on Sunday, April 15, at St. Margaret Church in Old Orchard Beach.  Father Michael Seavey, recently appointed parochial vicar of St. Michael Parish in Augusta, was the homilist at the Mass.

During the Ritual of Religious Profession, Sister Ann declared to the bishop her desire to make her perpetual profession and to follow Christ according to the Gospel and the rule of life of the Sisters of Our Lady of the Holy Rosary in such a way that her life becomes a manifestation of the love of God. 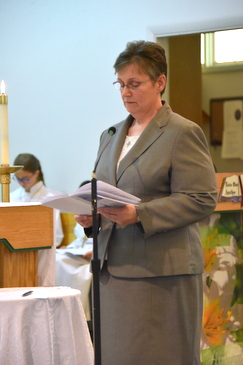 Sister Gabrielle then presented Sister Ann with a candle, which had been lit from the paschal candle, and holding it, Sister Ann consecrated herself to God.

“I give myself wholeheartedly to this religious family, committing myself to live in community in order to attain, with the grace of the Holy Spirit and the help of the Virgin Mary, perfect charity in serving God and the Church,” she said.

Sister Ann, Sister Gabrielle, the bishop, and other witnesses then signed the Act of Profession, after which the bishop blessed Sister Ann, praying that she may “radiate the face of Christ Jesus until the day where she will be reunited in heaven with all the saints.” The bishop then blessed her ring, which Sister Gabrielle placed on Sister’s Ann finger with the words: “Chosen of Jesus Christ, receive this ring, sign of fidelity and love.”

“The profession day was just amazing -- to have people there who didn’t really know me, other than they heard about me and that there was a profession taking place, and then my family who has known me forever, and then the sisters who have walked this journey with me, who have shared their lives and encouraged me. When I think about all those people, that is what the Church is made of. We’re all different, but we’re all one,” Sister Ann says.

Sister Ann is originally from Port Henry, N.Y. but moved to Presque Isle in the late 1970s after getting a job there.

Although Catholic her entire life, she says she did go through a period of searching while living in northern Maine only to return to Catholicism. 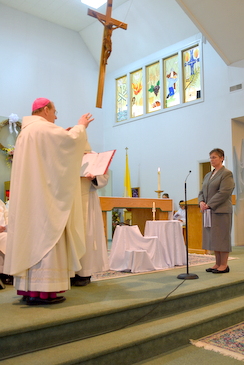 “I found it was the Catholic Church that really spoke to me, especially the Eucharist.  I like ritual and tradition as well,” she says.

After seven years in Aroostook County, Sister Ann moved to southern Maine. She worked as a typographer and a graphic artist and also served as RCIA coordinator at the Church of the Holy Cross in South Portland. That is where she met Sister Carole Jean Lappa, RSR.

“I told her that I was looking for a support group where I could go and share my own spirituality and be among men and women who had the same common belief, and she mentioned to me the associate ministry of the Sisters of Our Lady of the Holy Rosary. I went and became very active and involved in that,” she says.

Lay associates are women and men, married or single, who don’t take vows but who are formally connected to a religious order and commit to living out that order’s charism.

Sister Ann says the more she became involved with the lay associates, the more her relationship with God deepened. 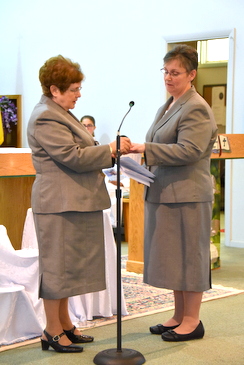 “That hunger and that desire became so strong that I could not focus on anything else but God. I would be at work, and I would find that I would be drifting off in a meditation state, being in prayer with Jesus,” she says.

Sister Carole Jean had once asked Sister Ann if she had ever considered religious life. Her answer had been an immediate no, but that would soon change.

“I guess I didn’t realize how beautiful and enticing their life is,” she says.

A turning point came when Sister Ann accepted the sisters’ invitation to stay with them while she recovered from surgery. It provided her the opportunity to experience the rhythm of their life.

“I enjoyed the praying together and the sharing of the Gospel and living in the community. Even though it was a short period of time, it just felt right,” she says.

Shortly after her surgery, Sister Carole Jean accompanied Sister Ann on a trip to New York to visit her mother. It was during that trip that Sister Ann mentioned her possible vocation.

“I said, ‘I really think I’m being called to religious life.’ And her response was, ‘I know.’ And it was like, ‘What? Why didn’t you tell me?’ And she said, ‘I’ve been watching it unfold.’”

After five years of preparation, first as a candidate, then as a postulant and a novice, Sister Ann made her first vows in October 2012.

Since that time, she has continued her formation and received a certificate in spiritual direction from the San Damiano House of Prayer in Lowell, Mass.  She stayed on to work there for a year, then spent time living with sisters in Dégelis, Quebec. She is now a spiritual director in Maine, along with leading retreats. 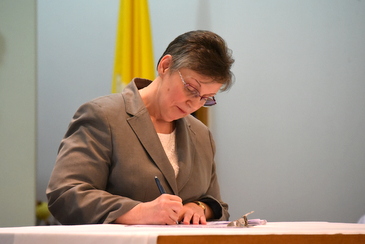 Sister Ann says having a spiritual director can help people see where God is present in their lives.

“I think Father Mike really summed me up well in his homily when he said Ann believes that behind every story is a story of God waiting to be told. I really believe that, because I think we live such a fast-paced life, and we’re not always present in our own life,” she says.  “Some people may come in and say, ‘I’ve had this experience of God, and it’s wonderful and great,’ and other people may come and say, ‘I really don’t know what is happening with my life,’ or ‘I don’t see where God is in all of this.’ My role is to help them look at and find where God is. I’m there to listen, and I think in the telling is when they really see it for themselves.”

Sister Ann says a 30-day retreat that she took leading her to her final profession helped her to see Christ in a new way in her life.

“It was like, for all these years, I’ve been walking with Jesus and journeying with Him, and following Him, and yet, I was never with Him,” she says. “But, during my 30-day retreat, we seemed to be united. So, it was like I fell in love with a Jesus that I never knew before.”

Although she says the journey to making her perpetual profession was a struggle at times, she has never doubted her call.