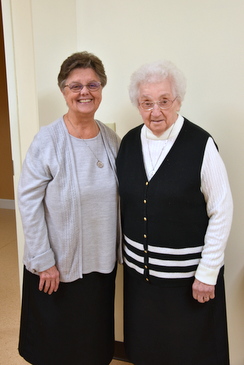 The Servants of the Immaculate Heart of Mary, more commonly known as the Good Shepherd Sisters of Quebec, are preparing to celebrate the 80th anniversary of St. André Home.  Responding to the request of a parish priest and in the spirit of their foundress, Marie Fitzbach Roy, the sisters established St. André in Biddeford in 1940.  Through the years, the ministry’s work has evolved but with the same mission always in mind.

St. André’s beginnings go back to December 1935 when Father Zenon Decary approached the sisters about opening a home to serve unwed mothers, pledging $5,000 from him and his brother, Father Arthur Decary, pastor of St. André Parish in Biddeford at the time.

Recognizing the need, the sisters agreed.

“Why did the priests from St. André want a home for pregnant women? Because, at that time in Maine, the only place that a pregnant woman could go and hide herself was at the women’s jail in Skowhegan,” explains Sister Viola Lausier, SCIM, who entered the Servants of the Immaculate Heart of Mary the same year the home opened.

The sisters had arrived in Biddeford from Quebec in 1882 to teach the French-speaking children at St. Joseph School in Biddeford.  While their ministry in education spread to many parts of the state, this new endeavor would bring them even closer to their roots.

“When the sisters were asked to pioneer an effort that was so dear to them, even to the point of sacrificing their own needs and to concentrate on a new work, the answer was simple, ‘Yes,’” shares Sister Terry.

A 70-acre farm, with a partially burned farmhouse, was purchased along the Saco River. The sisters worked for three years to get the property ready, final dedicating the home on March 3, 1940. Three weeks later, on Easter Sunday, a 16-year-old unwed mother became the first resident. 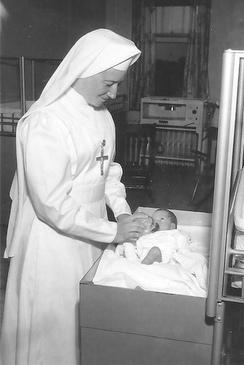 The women served by St. André came from throughout Maine, as well as Massachusetts and New Hampshire. Some women just showed up at the doors; others were referred there, often by priests.

“The parents would go to the pastor,” says Sister Viola. “We have many letters from priests.”

The home went to great lengths to protect the privacy of the women.

“We would always call them by another name. So, if someone called for someone by her real name, we would say, ‘We’re sorry. There is no one here by that name,’” says Sister Viola.

Sister Terry remembers visiting the home in 1965, when she was a senior at St. Louis High School in Biddeford.

“We came as a class. The girls were behind a curtain or something, and they talked of their experiences,” she recalls.

With a team of doctors on hand, St. André, for a time, also offered medical care to married women who were pregnant, a move that provided needed income and helped ease overcoming at the local hospital.

“They met with the social worker often,” says Sister Viola.  “Once a schoolgirl came to have a baby, she never went back to school. At that time, they decided they would continue their education at St. André’s, so we had special teachers to teach them.  The school was responsible to send us the work for the girls to do. We used to call it the High Hopes School.”

“Girls were keeping their babies more and more, but they didn’t know how to take care of them,” says Sister Terry. 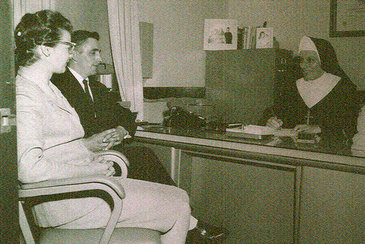 It resulted in St. André opening its first group home in Biddeford in December 1973.

“It was to help them learn how to be a mother,” says Sister Terry. “They would have parenting classes. They would stay with us until they could be on their own and had a job.”

St. André also opened a Bangor group home for unmarried mothers, which then expanded to also serve as an emergency shelter.  A home in Lewiston served emotionally and behaviorally troubled adolescent girls before transitioning to a parenting program.  At the request of Bishop Joseph Gerry, OSB, a second group home in Lewiston, Mary’s Place, opened in 1998 to serve single women and their babies.

Along with its other ministries, from 1954 to 2016, St. André was also a licensed adoption agency, placing 1,532 girls and boys in new homes through those years.

The current century brought more change. With a shifting state focus, funding became a challenge, and St. André’s group homes closed. Its work, however, was far from finished.

Ever mindful of its mission, St. André opened Hope Rising, now called CourageLIVES,to assist women victimized by human trafficking.  The program includes a group home where up to five women can stay at a time, followed by outreach once the women leave.

Although invaluable to the women it assists, finances continue to be a struggle.  Most of the support for CourageLIVES comes from the sisters’ foundation, with some money also coming from the Catholic Appeal.

“We could use more than one home, but the sad thing is that there is no money for residential care,” Sister Terry says.

Still, the sisters have faith the work will continue.

“When we opened St. André, there was no money either,” says Viola.

Sister Terry says when she thinks about the past and future of St. André, she reflects on the beech tree that is its symbol.

“The beech tree is thought to have knowledge of the past; it knows how to use the past to make changes in the present, which is often what we seek through our prayers,” she says. “And, its roots are deep. The spirit of the beech tree is one of great strength and grace.”