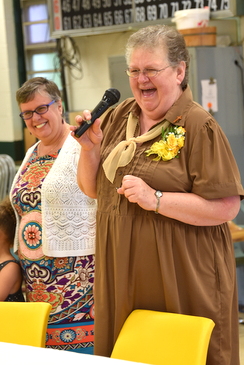 With her infectious laugh and unpretentious manner, it is no wonder that those who meet Sister Carol Martin, PFM, quickly feel at ease.

“She is vibrant and joyful, just so easy to get to know, so easy to work with,” says Christine Michaud, a great niece, who also worked with Sister Carol as a catechist at St. Michael Parish in Augusta. “There is no judgment from Sister Carol. You can just tell that God surrounds her.”

“What makes Carol so special is that she is so easygoing with everybody,” says Father Frank Morin, who has known Sister Carol for decades.  “She has always been a typical northern Mainer, someone who always makes you feel welcome.”

Sister Carol is celebrating her 50th jubilee this year. She professed first vows with the Little Franciscans of Mary in Baie-Saint-Paul, Quebec, in 1968.

Sister Carol says she has always tried to bring a sense of joy wherever she has served.  While she credits her parents, especially her mother, for her social nature, she says it’s also something she consciously looks to do.

“I’ve always tried to be joyful and show that if Christ means something to us, we have to show it. It has to show in our face,” she says.

Sister Carol was raised in a French-speaking, Catholic household in Eagle Lake. She remembers going to her grandparents’ house, so her grandmother could help her learn the Baltimore Catechism, which was in use in the Church through the 1960s.

She was introduced to the Franciscan sisters when her mother began working at Northern Maine General Hospital in Eagle Lake, which the sisters operated.  At age 12 or 13, rather than going to work in the fields picking potatoes, Sister Carol started to help her mother in the kitchen there.

Having been raised like an only child, because her siblings are much younger, Sister Carol remembers being struck by the sense of community among the sisters. 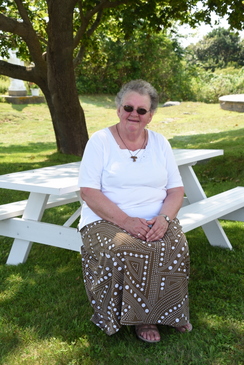 “They lived in part of the hospital, so in the summertime, you would go by, and you would hear the nuns in the community room, and they seemed to be enjoying themselves,” she says. “Not having that sense of having brothers and sisters to play with, I was very attracted by them having fun together and enjoying themselves.  They had a great sense of community, and since I was working there on the weekends and stuff, I liked to go pray with them. Sunday night, they had the exposition of the Blessed Sacrament, so I would go there.”

Although she doesn’t think she had a real sense of who St. Francis was at that point, she says the sisters witnessed Franciscan values, including the call to serve the poor.

During high school, Sister Carol also had a chance to learn about the Daughters of Wisdom, because they operated a boarding school in St. Agatha, which she attended for two years. Her call, however, was to the Franciscans.  She entered at age 17.

“My parents really didn’t want me to enter so young, but then, after I graduated from high school, they let me,” she says. “At the time, we did not have an American novitiate, so I entered in Baie-Saint-Paul.”

That was in 1965. She professed first vows three years later and final vows in 1972.

Always interested in nutrition, perhaps the result of her early experiences working with her mother, she first served at the People’s Benevolent Hospital in Fort Kent, now Northern Maine Medical Center, helping with meals.  From there, she did pastoral work and faith formation at St. Louis Parish in Auburn, then studied nutrition at the University of Maine in Orono. With her degree, she returned to northern Maine, taking a position with the Aroostook County Action Program (ACAP) as a nutritionist for the Special Supplemental Nutrition Program for Women, Infants, and Children (WIC).

“It was establishing the whole thing, setting up different clinic sites and hiring people.  There is a nutrition component to it, so we would go to different places in Aroostook County,” she says, “I enjoyed being with the people who would come, and talking with them, and trying to help them.”

She also served as local superior for the sisters during this time and when her term was up, she headed Down East to work for Action Opportunities as a Head Start nutritionist.

Working with Head Start, she had summers free, and used the opportunity to take liturgy courses offered at St. Paul Seminary in Ottawa, which would lead her in a new direction.

“It was like, wow. I would like to do more of that fulltime,” she says. “I think it was being involved in the parish and more of a religious environment, because the other places I worked were secular organizations.”

In 1995, she began doing pastoral work at St. Mary of the Visitation Parish in Houlton, then in 2003, became a resource person for the diocese’s Office of Catechetics and Initiation, serving parishes from Jackman to Camden.   In 2009, she began working at St. Michael Parish in Augusta as faith formation coordinator for St. Francis Xavier Church in Winthrop.  Along the way, she received her master’s degree in pastoral ministry through the Loyola Institute for Ministry Extension Program. 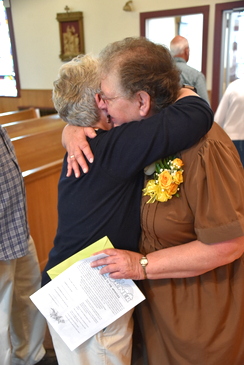 Sister Carol says she loves living and working in Winthrop.

“I like living where these people live, so if I’m grocery shopping or I’m at the drug store or something, I meet them,” she says. “I like the parent contact.”

Her current responsibilities include guiding those wishing to enter the Catholic Church.

“I enjoy initiation because it’s just neat to journey with people and to realize how they grow in their faith and help them along,” she says.

Sister Carol says in the RCIA program, she puts an emphasis on community.

“Do you sense a belonging to the Church? Do you identify with this family? Can you be involved with this family?” she says. “I try to connect them with the activities of the church and the parish and help them find people, so they won’t feel like they’re all alone in this.”

Sister Carol says she wants others to experience the joy she has found through her service to the Lord.

“You know that expression, ‘If you’re happy, let your face show it.’ Well, I think it’s the same thing. If you say you’ve been in religious life all these years, and you never show that you’re happy or that this is a joyful experience, really, why are you doing this? It doesn’t make sense.”

She says, as a Franciscan, she finds joy in living in community and praying together as a community.

“We gather together twice a day to pray morning prayer and evening prayer, which is important. It’s time to share where we’re at and to share the Gospel. Every week, we try to prepare our Gospel, for Sunday especially, and just to share where God is speaking to us there.”

In keeping with the spirit of St. Francis, she says it’s not an overly formal approach. 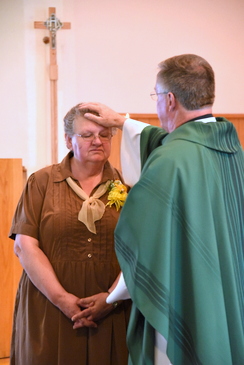 And the people she encounters say they see God reflected in her.  It is why a standing room only crowd filled St. Francis Xavier Church for her jubilee celebration.

“It’s her genuine character, her loving nature. She is just a sweetheart. I just love her,” says Rena Michaud, who has known Sister Carol since the two attended high school together in Saint Agatha.

“It’s been a grace for me to live with her for over 35 years,” says Sister Juanita Robichaud, PFM. “She has been my best friend and a great support, and I thank the Lord for that.”

“We just see the grace of God through all her goodness, her joy, and the peace and love that she shares in her life,” says Dan Spofford, OFS, a member of the St. John the Baptist Fraternity of the Secular Franciscans, for which Sister Carol is the spiritual assistant. “We are all very thankful for our dear Sister Carol.”

“I’m very grateful to God first of all and for the people who have been in my life and have made this meaningful, for having the grace to be able to serve and help people,” she says.

Sister Carol says it’s hard to believe 50 years have passed since she professed first vows, but she says she truly feels that she is where she was meant to be.

“That call has to be there,” she says. “You’re answering to the call of God, so you’re in your place. We have this expression in French, ‘Elle est dans son assiette.’ She’s in her plate, meaning in her place. You feel as if that is where you belong.”