Feeding the hungry during the COVID-19 pandemic 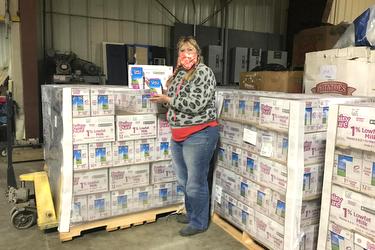 “Never, never, never. It’s not something you could even dream up.”

Dixie Shaw, the director of Hunger and Relief Services for Catholic Charities Maine, has been working to feed the people of Aroostook County for nearly two decades.  She has seen and met a lot of challenges through the years, but she says nothing compares to the situation created by the COVID-19 pandemic.

“We’ve had disasters before. We had the floods in 2008 where we had to roll up our sleeves and do whatever was needed to get through, but that was one section of the County. This is the entire state. This is the entire country,” she says. “It’s so much bigger than anything we could have ever prepared for.”

With unemployment soaring due to businesses being shut down, the number of people seeking assistance from food pantries has risen. The Good Shepherd Food Bank in Auburn, which partners with pantries and food banks across the state, says 90% of those surveyed reported an increase.

Shaw says that has certainly been the case for the Catholic Charities Food Bank, which purchases some of its food from Good Shepherd. With warehouses in Caribou and Monticello, Catholic Charities supports 27 local food pantries: 25 in Aroostook County, one in Penobscot County, and one in Washington County. Shaw says while pantry workers used to come in once a month to pick up food, some are now coming every few days. 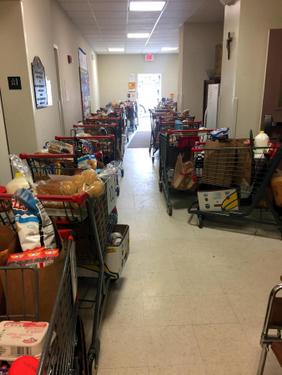 “The food that comes in typically goes right out,” Shaw says. “It’s really been a tremendous amount of work and effort.”

Kaylene Shupe, director of Mildred’s Pantry in Houlton, one of the pantries Catholic Charities serves, says their clients, who receive a shopping cart full of food, would typically come in once every eight weeks. Now, they’re welcomed back more often.

“I told them if they have a problem to come in.  There are some who come in every two weeks because they need it. They don’t have food,” she says.

Shupe says there have been a lot new faces and new families since the pandemic struck.

“It’s new people or people who haven’t been in for years who are needing help,” she says. “We still get some regulars, but it surprised me that’s it’s been a lot of new people.”

With the increased need, Shaw says it’s been harder to keep warehouses stocked. Shortly after the state’s stay-at-home order took effect, she says the food bank was fortunate to receive truckloads of fresh produce, the result of restaurants cancelling orders.  She also has frozen meat on hand thanks to earlier shipments from the USDA.  What has been difficult to buy in large quantities are pantry staples such as canned and boxed goods. Shaw says she knows Good Shepherd has been working hard to keep up with demand, but she also knows, “I’m not the only one beating on their door.”

It’s left her looking for other options.

“Right now, I’m trying to shake some dry goods out of the trees because there seems to be pretty slim pickings,” she says. “I’ve even been looking at purchasing food from Canada to meet the need.” 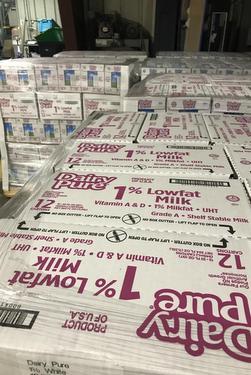 A shipment of shelf-stable milk received in late April was reason to celebrate.  Shaw was able to buy the milk directly from a Pennsylvania company through the assistance of Catholic Charities USA, which also helped cover the cost.

“Milk is one of the most requested items during the COVID-19 virus pandemic, and resources within the state were unable to provide the much-needed staple,” Shaw says. “This milk is a blessing to the many people we serve.”

Finances add to the challenge.  Shaw says the Catholic Charities Food Bank received assistance from “Singing for their Supper,” a nationally televised fundraiser featuring performances by country music stars.  However, it is feeling the effects of lost revenues from its thrift stores in Caribou, Presque Isle, and Monticello, which were forced to temporarily close.

“This is one of our challenges right now, the revenue to make this work,” she says.

“We’ve had a lot of extra donations come in, so the food we don’t get from Good Shepherd and Catholic Charities, we are able to purchase from the local grocery stores,” Shupe says. “We’ve had people keep donating toilet paper, which is very good because we can’t get that right now.”

Another challenge facing pantries around the state has been fewer volunteers, since many of their regulars are seniors at high risk from the coronavirus.  Shupe recruited her 22-year-old twins and her teenaged children to fill the gap, stressing the importance of keeping the pantry open.

“It’s even more important now because people are scared,” she says. “Not being able to work, there is greater need than ever before, and it would really add to people’s hardships and their fears if the pantry were to close down.”

The commitment to keep operating is just as strong 200 miles away at the Tri-Town Ministerial Food Cupboard in Jay. Like the pantry in Houlton, the cupboard has temporarily lost some of its long-time volunteers due their age and the coronavirus risks.  While that has put an added burden on those still volunteering, Raymond Bryant, the cupboard’s long-time director, says people need to have food to eat.

“Just because we’re having the coronavirus, we can’t just let the people go hungry,” he says. “There are people in our community who are hungry and poor, and we need to be helping them.”

The pantry, which operates out of the St. Rose of Lima Parish hall, serves approximately 175 people a month. It is a joint effort of St. Rose, the First Baptist Church in Livermore Falls, and the North Livermore Baptist Church. Bryant says members of the communities have always been supportive.

“We’ve never had to go out and do fundraisers. We get donations from individuals in town, from businesses, from parishioners,” he says.

To keep volunteers and clients safe, the pantry has taken precautions. For instance, clients no longer come into the building. Instead, they wait in the parking lot. 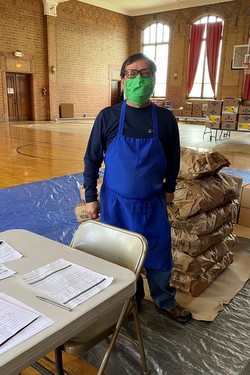 “When it’s their turn, we call them to drive up next to the door, and we prepare a box for them and take it out,” he explains. “They load it in their car and, then, away they go.”

Similar steps have been taken at the St. Vincent de Paul Soup Kitchen, located at the Cathedral of the Immaculate Conception’s Guild Hall in Portland.  The kitchen continues to operate every weekday, but now, they serve bag lunches to go.

“It’s really tough because a lot of our clients, they would just like to have a bowl of soup.  Unfortunately, we can’t do it,” says Jesse Senore, the director.

Clients are no longer allowed in the hall.  Instead, a table is set up just inside the doorway, where clients can pick up a bag lunch, as well as a bag of food pantry items. Volunteers wearing masks and gloves stand more than six feet away.

“We let one in at a time. We tell them, ‘This bag is the lunch for you today, and if you’re cooking from home, take another bag.’ So, if you’re cooking at home, you’re ending up with two bags. Then, they leave.”

A bag lunch includes a sandwich, fruit, cookies, raisins, nuts, potato chips, and bottled water, while the food pantry bag might contain items such as cereal, peanut butter, and powdered milk.  Since most clients walk to the soup kitchen, the weight must be kept down.

To add to the variety of meals, Senore says volunteers have started putting in some extra touches. For instance, one day, they prepared mini quiches.

“We’re all doing what we can under these conditions,” Senore says.

Because the soup kitchen serves anyone who walks up, no questions asked, Senore knows there is an increased risk. 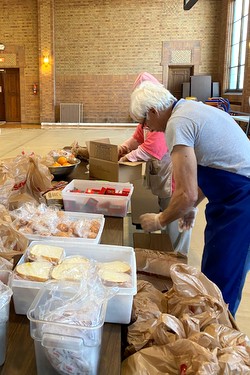 “We have no sense where they go or where they come from,” he says. “We’re always wiping things down, but I worry.”

It is why he asked the older volunteers to stay home for the time being.  Senore says they normally have 8 to 12 volunteers a day.  Now, they have three or four.

Senore has high praise for those who continue to serve.

“To me, they’re my heroes,” he says. “They’re the ones who come in and make the sacrifice. They could be home watching TV and reading a book and not even worry about it, but they come in.”

Steve Capriola, who has been volunteering at St. Vincent for nearly six years, says he does it because of the need.

“That need isn’t going way, so someone has to step up to do it. And I just kind of figured I would be the guy who does it There are other people doing it, too,” he says.

Including Senore, who is at the soup kitchen three or four days a week.

“I’m a Knight of Columbus, so a lot of my volunteering comes from being a Knight,” he says. “I don’t look for a thank you or ‘Oh, you did