Hundreds Gather for Annual Hands Around the Capitol Rally in Augusta 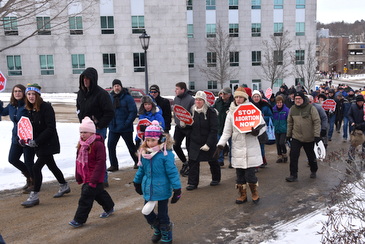 "Confirm our resolve, O God, by the life-giving body and blood of your Son, that we may live always for others and cherish your sacred gift of human life." - Bishop Robert Deeley.

With heads tucked beneath hats and hoods, hundreds braved temperatures that barely made it into the double digits to participate in the Hands Around the Capitol rally in Augusta.   The event is held annually to call for an end to abortion and for the protection of human life from conception to natural death.

“I can endure a few moments of cold for a child who is unborn in a woman’s womb,” said Amanda Harvey Turcotte, a second-grade teacher at St. Michael School in Augusta. “God gives us the gift of life, and it’s important to support and to defend God’s creation.”

“Life is important. Everyone needs a chance to live,” said Theresa Guillemette, age 12, from Waterboro.  “A lot of people think that unborn babies aren’t human, but they are, and they need a chance to live like us.”

This is the 47th year that people have rallied, marched, and encircled the state house to pray that all will come to realize the value of all human life.  The rally has been held each year since the 1973 U.S. Supreme Court Roe v. Wade decision, which legalized abortion.

“I think it’s important because the unborn don’t have a voice. It’s our job to speak for them and to educate people,” said Jessica McMahon, from Sanford. “I don't think people understand that we’re not anti-woman. We’re pro-woman and child when we do this."

“Abortion is wrong. It’s killing a child,” said John Harvey, treasurer of the Maine State Council of the Knights of Columbus, who traveled from Hermon to attend. “We stand for what the Church believes in, and we’re here to support the bishop and to follow our faith.”

The Hands Around the Capitol event, which is sponsored by Maine Right to Life, began with Mass celebrated by Bishop Robert Deeley.  Hundreds filled St. Mary of the Assumption Church in Augusta for the Mass, which was concelebrated by Father John Skehan, pastor of St. Michael Parish, which includes the church; Father Arokiasamy Santhiyagu, HGN, a parochial vicar of the parish; and Father Patrick Finn, a parochial vicar of Corpus Christi Parish in Waterville.

“We are together in our commitment to uphold the value of life. That is our mission today,” the bishop said. "I hear time and time again that we should leave the decision concerning the life of an unborn child to a woman and her doctor. She will know what is best for her family and her life. On its face, it is a convenient argument. Its only problem, which happens to be a large one, is that it gives no acknowledgement to the life growing within the woman. The fetus is not the woman. It depends on her and her body, but it is a distinct individual. Who cares for this unborn child’s right to life?”

The bishop said he is disheartened by the attacks on human life that happened in Maine during the past year, including measures that allow the use of taxpayer dollars for abortions and that legalized physician-assisted suicide. Still, the bishop said, as people of faith, we live in hope, because we know that God is with us.

“This is God’s work. We are called to work with the grace he gives us to bring about a change of hearts and minds in our culture. We continue our advocacy in the hope that we will find a way for all in our society to embrace an ethic that values all human life, from conception to natural death,” the bishop said.

Some who attended the rally said they were motivated to come because of their concern about the direction in which the state is headed.

“I wanted to stand up for life. I was so disappointed with what happened in the last year with the taxpayer-funded abortion and physician-assisted suicide, I just felt standing up for life was the least I could do,” said Janet Brackett from New Sharon, who attended for the first time. “I think people. when they don’t hear and see things from individuals, they assume they’re all good with what is going on. I know I can’t change everything by myself, but I don’t want people to assume that about me.”

“I am so hurt by the state of our state, and I just think we need to pray for each other,” said Lisa Charette from Manchester. “I am a public school teacher, and I’m not allowed to profess my faith in the school, so if I can do this a little bit, and people see me here, and I just carry it with me in how I treat people in school, then, maybe, the message of what I believe will still get through.”

Following the Mass, people of all faiths gathered in the gymnasium of St. Michael School, located next door to the church, for a 90-minute rally.  Along with the bishop, the standing-room-only crowd heard from several pro-life speakers, including Karen Vachon, the new executive director of Maine Right to Life.

“We gather in solemn memorial to be the voice of the innocent, vulnerable, and speechless who had no choice in the decision that ended their precious life,” she said.

Vachon said the number of abortions in the United States is declining, something she attributes to medical advances since Roe v. Wade was enacted.

“Seeing a fetus, hearing a heartbeat has exposed the undisputable truth: life begins at conception. Women are choosing life,” she said. “Every life is valuable.”

Among the other speakers were members of the Maine Vitae Society, State Rep. MaryAnne Kinney of Knox, and Dr. Haywood Robinson, a former abortion provider who is now the director of medical affairs and education for 40 Days for Life, an organization that coordinates a 40-day international campaign to end abortion.

“God’s view on the shedding of innocent blood has not changed since the time that Cain slew his brother Abel. When innocent blood is shed, it cries from the ground, and God hears it,” Dr. Robinson said. “This lie about abortion is something that we’re going to expose, we’re going to fight.”

Following the rally, participants picked up “Stop Abortion” and "We Support Life" signs and then marched to the nearby statehouse.

"I’m not walking just for the unborn but for all life, including the elderly and those who have mental disabilities, to support all life," said Turcotte.

"One of the biggest reasons I come is that my son is adopted, and my daughter has adopted four children, so every time I come here, it keeps reminding me just how precious life is. And every time I look at my grandsons and my two granddaughters and my own son, I say thank God their parents didn’t abort.  Because of them, I now have six grandkids," said Phil Lizotte, Grand Knight of Knights Council 9782 in Wells. "To offer your child to someone who cannot have a child, that’s the greatest gift you can give, the gift of life."

Once at the statehouse, the marchers spread out, encircling much of it, some of them holding up signs, others linking gloved hands.  The capitol bell was then rung 47 times, once for each year since Roe v. Wade.  With the crowd standing in silence, each time the bell sounded, a red rose was placed on the ground.