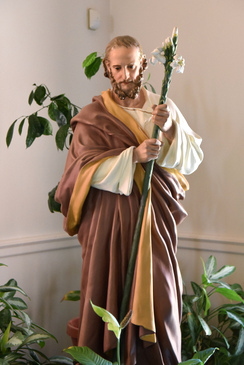 St. Joseph: A man of our times

On March 19, we celebrate St. Joseph, the father who, with Mary his wife, raised Jesus, guiding Him to the maturity that would prepare Him to take on the mission given to Him by His Father in heaven. Joseph is the quiet presence protecting Jesus and Mary. In his role in Jesus’ life, he reminds us of the wonder of the Incarnation. Jesus, the Son of God, in becoming man, took on our human nature. He “worked with human hands; He thought with a human mind, He acted with a human will, and with a human heart He loved” (Gaudium et Spes, 22,2.). We often see pictures of Jesus beside Joseph in the carpenter workshop, with Joseph carrying on his craft and sharing his knowledge with Jesus.  So, too, we remember that, in the affection of Joseph, Jesus learned of the tender love of God.

St. Joseph is a man for our times. Pope Francis has proclaimed this the “Year of St. Joseph.” One hundred fifty years ago (December 8, 1870), Pope Pius IX declared Joseph patron of the Universal Church. Now, in the midst of the pandemic which has so affected our lives, Pope Francis wants to lift up this quiet man whose steadfast faith and abundant love played such a pivotal role in salvation history. In the pandemic, we have become aware of the great importance of the ordinary people who sustain our lives and shape the decisive moments of history. Pope Francis calls to our attention the contribution of those who have kept our society going: “Doctors, nurses, storekeepers and supermarket workers, cleaning personnel, caregivers, transport workers, men and women working to provide essential services and public safety, volunteers, priests, men and women religious, and so very many others. They understood that no one is saved alone.” St. Joseph could easily stand among these people, the man who can go unnoticed but the one who can be relied upon as an intercessor, a support and guide in times of trouble. In honoring him, we acknowledge all who quietly help us.

In his letter announcing the special year (With a Father’s Heart) Pope Francis reflects on seven ways in which we can learn from St. Joseph. These provide us all a point of reflection in these days of Lent.

Pope Francis gives us the year of St. Joseph in the hope that it will encourage us to implore the intercession of this great saint and imitate his virtue and his zeal. St. Joseph, guardian of the Holy Family, pray for us!