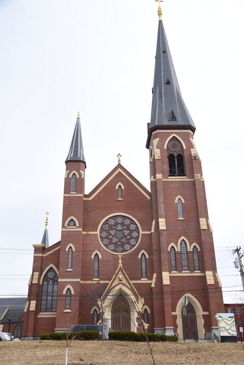 With its soaring spires and graceful arches, the Cathedral of the Immaculate Conception in Portland has stood as a witness to faith and beauty for 150 years.  It remains, as it was the day it was completed, the tallest structure in Portland, welcoming those entering Maine’s largest city.

But what are some of the features that sets the cathedral apart?  As the Diocese of Portland begins a nearly yearlong celebration of the anniversary of the cathedral’s dedication, more than 100 gathered in the cathedral’s chapel to learn about the theological and architectural significance of the building.   Following an introduction by Bishop Robert Deeley, the presentation was given by Monsignor Marc Caron, a priest of the Diocese of Portland, who is currently a professor at Saint John’s Seminary in Brighton, Mass.

“A cathedral is meant to be the heart, center, and exemplar of a diocese. It is the site of the significant events in the history of a diocese: the annual consecration of the chrism for baptism, confirmation, ordination, dedication of altars and churches; the ordination of deacons, priests, and bishops over the years; welcoming a new bishop or burying its former shepherds, as well as the day to day events of any parish church,” explained Msgr. Caron.  “As the Ceremonial for Bishops says, ‘the diocesan cathedral, in the majesty of its building, is a symbol of the spiritual temple that is built up in souls and is resplendent with the glory of divine grace.’” 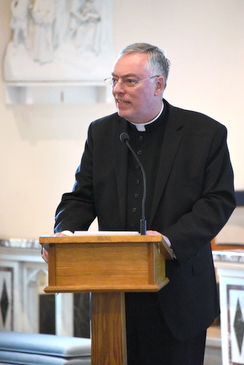 Msgr. Caron told those gathered that the cathedral in Portland is one of only a handful of buildings left standing from the earliest decades of the founding of diocese in 1853.  Only St. Patrick in Newcastle, St. Ann on Indian Island, St. Denis in Whitefield, St. John in Bangor, and the former St. Joseph in Lewiston predate it.

Msgr. Caron pointed to the contributions of two men: Bishop David Bacon, the first Bishop of Portland, and Patrick C. Keely, the building’s architect, saying we owe the existence of the cathedral to them.

At the time the cathedral was built, there was only one other Catholic church in Portland, St. Dominic, although not the building that stands today.

“Bishop Bacon decided that Portland needed a second parish at the other end of town, and this one would be built specifically as a cathedral. Bishop Bacon set out to build his cathedral by beginning with the chapel in 1856,” Msgr. Caron said.

The original chapel, designed by John Doyle of New York City, was finished in December 1856, and work then began on the cathedral itself.  Unfortunately, a shortage of laborers and money during the Civil War delayed construction. Work resumed in May 1866 under the direction of Keely, who was a rising star when it came to designing Catholic churches. 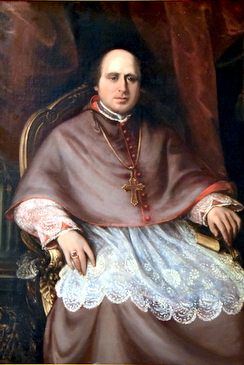 “David Bacon and Patrick Keely had a personal bond that no other bishop at the time could claim.  As pastor of Assumption Church in Brooklyn, Father David Bacon had married Patrick Keely and his wife Sarah Farmer in 1846,” Monsignor Caron shared.

The walls of the cathedral were just starting to rise when there was a devastating setback. On July 4, 1866, the Great Fire of Portland destroyed 1,800 buildings, including the chapel, Bishop Bacon’s home, and the partially built cathedral.  It would lead Bishop Bacon to go on a tour around the United States to raise money to build anew. He spent much of 1867 raising money, and in spring 1868, work began again.

At the time, the Gothic Revival movement in architecture was becoming more prevalent, and it was this style that was adopted by Keely for Portland’s cathedral.

“He will use very elongated spires, many of which were the tallest structures in their town at their opening, as was the case in Portland, to recreate the Gothic’s quest for greater and greater verticality,” Msgr. Caron said. “One of the hallmarks of the Gothic movement is to go higher, and higher, and higher, pointing to heaven.”

In addition to reaching skyward, Msgr. Caron pointed out that the cathedral’s spires have different heights, something that classical architects would have never done.

“They never would have upset the perfect symmetry of a building by adding mismatched towers, but medieval builders did it all the time, and so did Keely. Even though the three towers of the cathedral are of different heights, their individual proportions and their relationship to each other, when taken together, remain as graceful as ever,” Msgr Caron said.

Although brownstone or granite were most often used as building materials for Gothic churches, Msgr. Caron said Keely used brick, understanding that many of his clients couldn’t afford the more expensive stone.

“While the Gothic revivalist insisted on stone as the load bearing interior of a building, Keely did not hesitate to use wood trestles and masonry to carry the weight of the building,” explained Msgr. Caron. 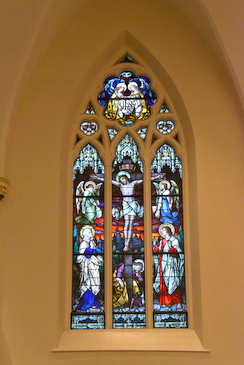 The windows, commissioned by Bishop William O'Connell and his successor, Bishop Louis Walsh, were designed by the renowned Franz Mayer Studio in Munich, Germany. They depict scenes from the life of the Blessed Virgin Mary.

“In itself, that is a typical iconographic cycle for many Catholic churches. Mary herself is an icon of the Church. She is the first and foremost disciple. What can be said of her properly is said by analogy of the whole Church, so she figures prominently in many church designs,” Msgr. Caron explained.

In the cathedral, the Blessed Mother is honored under the title of the Immaculate Conception, fitting since it was in 1854, the same year that Bishop Bacon was named Bishop of Portland, that the Universal Church affirmed the doctrine that Mary was born without original sin.

Another beautiful feature of the cathedral is its “floating” sanctuary. Rather than being framed by walls, the sanctuary is surrounded by an ambulatory leading to three chapels.

While the interior lines of the architecture of the cathedral have remained unchanged through 150 years, Monsignor Caron pointed about that the interior has undergone reordering and renovation, most especially after the close of the Second Vatican Council in 1965.   Among other changes, an altar was placed so it faced the people, a distinct baptistery was created, and the bishop’s cathedra or chair was placed at the head of the sanctuary.  Unfortunately, some beautiful Gothic features were lost during this time, but a renovation in 2000 sought to reverse that, with a portion of the altar, pulpit, reredos and pulpit from the former St. Dominic Church added.

“While these elements date from 30 years after the cathedral opened, they are, as a group, more in harmony with and more consistent with the basic lines and philosophy of the building,” Msgr. Caron said.

Monsignor Caron said the fact that the cathedral has stood for 150 years is a tribute to Patrick Keely, the bishops, and the faithful of the Diocese of Portland.

“Fostering a strong community of faith, worship, and service here within its walls and in the shadows of its spires is the best way to guarantee its future for the next 150 years,” he said. "May many more generations become inspired to practice the love of God and love of neighbor by its beauty and majesty.”

Additional events are planned to celebrate the cathedral’s 150th anniversary. They include a Mass on September 8 commemorating the Nativity of the Blessed Virgin Mary and a Mass commemorating the Immaculate Conception on December 7.  Both will be celebrated by Bishop Robert Deeley.

For more information on the 150th anniversary of the cathedral, click here.