The Way We Grow

When Dr. Kevin Birch sits down at the keyboard of Hook Opus #288 pipe organ at St. John Church in Bangor, it is most often to lead the Sunday congregation in prayer and song.

However, on one recent Friday, hymns such as “Holy, Holy, Holy” were replaced with secular standards such as “Twinkle, Twinkle, Little Star” and “Baa, Baa, Black Sheep.”

Perplexing perhaps, until you realize that a good portion of his audience stood less than four feet tall. 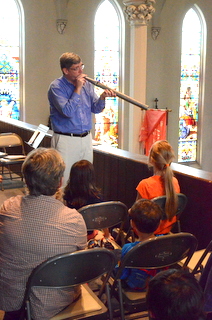 “I want to play that when I grow up,” says Lexi, age four.

Kevin was the featured presenter at the monthly meeting of “The Way We Grow,” a group for young families at St. Paul the Apostle Parish in Bangor.

The group was founded a year ago by two parents, Mary O’Roak and Vanessa Rehmeyer, and the parish’s then faith formation director, AnneMarie Coleman.

Vanessa says she used to be active in the parish’s young adult group, but after her daughter Lydia was born, she found it was no longer a good fit.  Staying out late, for instance, was no longer an option. Still, she wanted to retain her connection to the church community.

“I think it’s important to bring young families together.  As a family, you form a culture, naturally, in your household. And this is a way to help families incorporate aspects of their faith and to teach their children from a young age what a vibrant community we are,” says Vanessa.  “There are so many families, and they really are the life of the Church.”

The name of the group, “The Way We Grow,” reflects these parents’ desire to have their children grow up recognizing that Jesus is ‘the way, the truth, and the life’”(John 14:6).

The group meets once a month, typically in the parish hall.  Cognizant of the children’s limited attention spans, gatherings are kept to about one hour in length.  The parents sit in a wide circle with their children playing in the middle.  Toys were donated by participating families.

It can get a bit noisy at times, but the parents and speakers take it in stride. 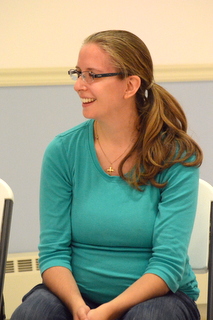 Typically, five to ten parents attend, most with one or two children.

“It’s a really great resource to connect with other families within the church and to, kind of, bounce ideas off each other: how to handle Advent, how to handle Lent,” says Megan Altenritter, who brings her one-year-old son George.

“One of our best discussions we had was with Father (Tim) Nadeau about parents worrying about having children in church,” says Vanessa. “Communities like this help us to see that, one, the disruption is probably not as big as the parents think it is, because you know, we’re hyper aware of it, but also that children are so important to the Church."

Father Nadeau also led the group on a tour of the church’s stained-glass windows.

“He told the stories to the children, and it’s always neat because the parents get so much out of it, too,” says Vanessa.

While some of the presentations are aimed at the children (Who knew the giant pipe organ could make sounds like a cow or a pig?), others are planned with the parents in mind.

“How to keep up with your faith and how important it is to know your faith inside and out, because that’s how your children learn.  If you can’t answer their questions, then it’s problematic,” says Vanessa.

The parents who participate say it’s been a valuable learning experience in more ways than one.

“The benefit is to just get to know a bigger part of your church community, and to get to talk about items, and relate stories, and get ideas on how to do things in a faith-based way,” says Jen Hikel, who has three children, ages one to four.

“Being a first-time mom in the church and a convert to Catholicism, I wanted to figure out how you raise children in the Church, since I wasn’t raised in the church at all.  It’s been a fantastic resource,” says Megan. “We’ve learned a lot of practical knowledge and gotten a lot of reinforcement, a lot of encouragement.” 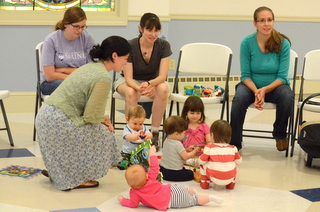 “I think for the first year of having my daughter, I was a nervous mother,” says Vanessa.  “Seeing more experienced families helped me so much.”

“The Way We Grow” also offers a private, online forum where the parents can ask questions of one other.

“That’s been really great, because you can even get things like breastfeeding advice, natural family planning advice, all that stuff,” says Megan.

The group has also branched out and started “Meals for Mamas,” preparing meals for new moms in the parish, and they’re planning to begin diaper donations to help financially-struggling families.

While the parents say they’ve gotten a lot out of the group, they say it has also been beneficial to their children.

“It’s a good experience for him,” says Kathy Percival about her three-year-old grandson.  ‘I had to run a couple errands on the way here, and he was, like, ‘When are we going to play church.’”

“He loves just seeing all the kids,” Megan says of her son. “When we were up in the choir loft just now, Lexi, who is four years old, was making faces at him, and he was laughing.” 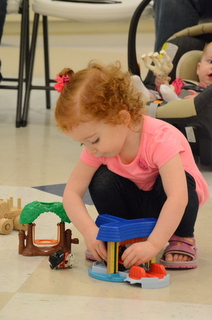 These parents and grandparents say the group has helped their children become more comfortable at church and helped them realize it’s not just a place where they go on Sundays and where they have to always be quiet.

“I just wanted him to have a different perspective of church, being with people and sharing experiences,” says Kathy. “I want him to know it’s a way of life.”

The group has worked out so well that Vanessa and the others are hoping other parishes will consider starting similar groups.

“If anybody in another parish is interested in copying this and making a young families group, we would certainly share the name, share the logo, share the structure of how we run things, and share ideas. I would be thrilled,” says Vanessa.

“It’s just a fantastic way to connect with other families,” says Megan. “This has been really awesome for us.”

If you would like to learn more about "The Way We Grow" or would like to consider starting a group, Vanessa would love to hear from you. The group's email is: [email protected].