Warsaw Province of the Redemptorists 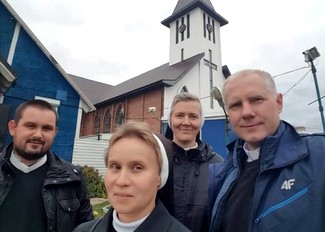 The ministry of Polish Redemptorists in the East began as the answer to the “perestroika” or transformation. With the collapse of the Soviet Union, the Warsaw Province of Redemptorists reached out to Catholics living there. They have now been working in the former Soviet Union for 30 years.

The Redemptorist parishes are located mostly in large cities, with pastoral centers in Russia, Kazakhstan, five in Belarus, and one in Ukraine. While their parishes are not large, they say their congregations are young, giving them hope for the future. The Redemptorists organize various religious and social events for the youth including vacation with God, religious concerts, and singing groups.

The Redemptorists say that while they have enough money to cover basic expenses, they are having difficulty raising the money to expand their mission. They are in the process of building a pastoral center in Togliatti, a Russian industrial city inhabited by more than one million people.  The center will include a church, space for pastoral, charitable, and cultural groups to meet, conference rooms, and accommodations for clergy. Currently, the closest parish is 60 miles away.

Construction on the center and new church, named for Pope St. John Paul, began in 2004. Unfortunately, the cost of construction is very high in comparison to the income of parishioners, making it impossible for the Redemptorists to finish the projects without financial help.

“We deeply believe that a construction site is not only a human matter, but also, it is a matter concerning God, who will provide aid for us through good people. We trust in both God’s and your help that we will finish all the work and that the faithful here will have their church where they long to pray,” the Redemptorists wrote.

Despite the difficulties faced, the Redemptorists also took on the challenge four years ago of creating a new parish in the large district of Minsk, Belarus, since there was an urgent pastoral need there. This district is growing and will soon include 20,000 inhabitants.

“Even though Minsk is a capital city, Catholic parishes undergo many problems with building new churches. We are very hopeful about the future despite many political difficulties. We have Belarusian Redemptorists and many vocations, which make the parishes stronger, so the authorities cannot remove the ministry,” the Redemptorists shared. 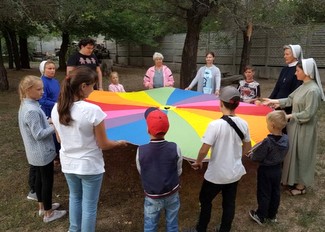 At present, parishioners meet for prayer in a family house. The goal is to build a small church with 200 seats, along with space for meetings and rooms for priests.

The Redemptorists credit support from parishioners who respond to their mission appeal for what they have been able to accomplish so far, but there is more work to be done.

"We are facing difficulties with building much needed churches in Togliatti and Minsk.  Without your help, we will be unable to cover all the construction expenses," said Rev. Janusz Sok, CSsR, provincial superior of the Warsaw Province. "Thank you for your prayers and support. May God bless you for your generous support through the Mission Appeal 2020."

To contribute to the work of the Polish Redemptorists, visit the online giving page of St. Michael Parish in Augusta.

Although the accompanying song is in Polish, if you would like to see the progress that has been made on Pope St. John Paul II in Togliatti, you can find a YouTube video here. The images alone speak volumes.