BANGOR---The dream and determination of a poor Filipino man turned Mainer, the Third World Mission organization, and the generosity of St. Paul the Apostle Parish in Bangor have all come together to help the Anakan Children’s Hospital in the Philippines, a hospital recently damaged by fire.

Marius Ramirez grew up in Anakan, a barrio of Gingoog City in the Philippines. One of eight children, Ramirez’s family barely had enough food to eat and money to attend high school. Thanks to a tireless work ethic, Ramirez was able to eventually study civil engineering at the Cebu Technological University, an experience that led him to an engineering job in Maine. A resident of Ellsworth, he earned a bachelor’s degree in nursing from the University of Maine at Orono and has spent over two decades in the long-term nursing profession. 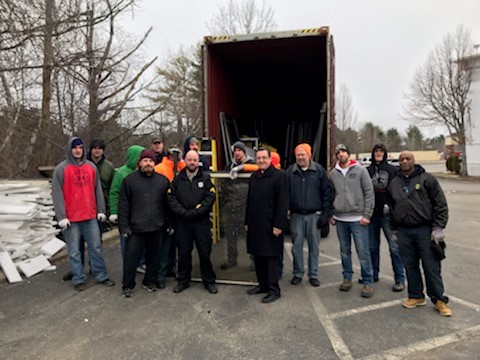 With his savings, Ramirez organized medical missions to his native Anakan and oversaw the construction of a children’s hospital. Last year, the hospital was nearly completed when a fire, caused by a young boy who had lit dried leaves nearby, almost destroyed the building.

Enter Third World Mission, an organization that provides the essentials of daily living like water, food, and clothing to those living in dire situations around the world, sharing resources to offer compassion. Moved by the story, the organization arranged for windows, construction materials, carpeting, kitchen equipment, and other supplies to help rebuild the hospital. The question soon became how to pay to ship it all to the Philippines.

“When we heard what had happened, our parish was happy to provide the funding to obtain a shipping container and to cover the shipping costs to the Philippines,” said Fr. Frank Murray, pastor of St. Paul the Apostle Parish in Bangor.

As a result, in late December, a 45-foot container arrived in Bangor. Pre-release inmates from the Penobscot Jail and residents of a local drug rehabilitation center met the container and loaded the equipment and supplies.

“The container was then moved to the Holiday Inn, where nearly 200 windows were loaded,” said Fr. Murray. “It was part of the hotel’s renovation.”

The next stop was Crosspoint Church, where carpeting that had been removed was loaded along with more construction supplies. The Spectacular Events Center in Bangor also donated two ovens, kitchen equipment, tables, place settings, and various catering supplies.

The container was transported to New Jersey for its journey to Anakan.

Without the support of St. Paul the Apostle Parish, organizers acknowledge the shipment would not have been possible and the repair and construction of the hospital would be severely delayed.

“The estimated value of the material shipped was more than $100,000,” said Fr. Murray. “I’m so grateful that our parish community is driven to offer generosity to people in need, even individuals and families that we will never meet.”