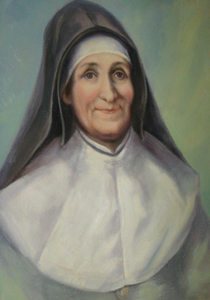 Saint Julie was born on July 12, 1751, at Cuvilly, France. She was one of seven children born to Jean-François Billiart and Marie-Louise-Antoinette Debraine. At the age of 7, Julie had memorized the catechism and would “play teacher” with her friends as students. Although the normal age for reception of first Communion was 13, Julie’s parish priest, impressed by her spiritual maturity, allowed Julie to be confirmed and receive the Eucharist at age 9.

By the time she was 16, Julie was locally renowned for her virtue and piety. The villagers called her the “Saint of Cuvilly.” She worked in her father’s fields with the reapers, and she was fond of sitting on a haystack at lunchtime to teach them the faith.

When Julie was 22, someone took a pistol shot at her father. This so shocked Julie that she became paralyzed from the waist down. While bedridden, Julie’s prayer life grew richer, and she spent four or five hours a day in contemplation. Her active ministry included catechizing the local children.

During the French Revolution, Julie offered her home as a safe haven for hunted priests, thus allowing the Sabbath to be kept holy.  It was also during this time that she had a vision in which she knew she was to begin a religious order. Shortly afterward, she met Françoise Blin de Bourdon, Viscountess Gizaincourt, who was attracted to Julie’s life of holiness. The two women founded the Institute of the Sisters of Notre Dame, which had as its primary purpose the care and education of poor children. The first pupils were eight young orphans.

On the feast of the Sacred Heart in June 1804, after making a novena in obedience to her confessor, Julie was healed of her paralysis and walked for the first time in 22 years. In October of that year, Julie, Françoise, and two others made their first vows in religious life, devoting themselves to the Christian education of young girls.

Julie’s final act of charity was caring for the wounded from the battle of Waterloo. In doing so, she taxed her health and became ill. After three months of suffering, she died with the Magnificat on her lips. She was 64.