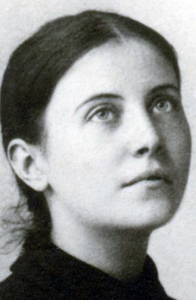 Gemma Galgani, a young Italian laywoman, is one of a select group of saints known as stigmatists.  From 1899 until her death in 1903, Gemma physically experienced the wounds of Christ – the stigmata. Every Thursday evening, Gemma’s hands, feet and side began to bleed. The bleeding stopped on Friday afternoon, leaving only white marks as a reminder. Gemma experienced visions, raptures, ecstasies and other mystical graces, but she also had to deal with great temptations from the devil.

Even though Gemma had miraculous visions, she lived a quiet, simple life of prayer and service. When her father died, 19-year-old Gemma took care of her seven brothers and sisters. When she was not spending time in silence and prayer, she went about the typical daily chores of taking care of a household. As her brothers and sisters became old enough to take care of themselves, she moved in with a family who enabled her to spend more time in spiritual activities.

Gemma suffered many setbacks in her life. She loved school but had to drop out because of her poor health. When she fell ill and had to move in with relatives, she was distressed at the trouble she caused them because of her illness. Worst of all, her sickness kept her from entering a religious order and becoming a nun, even after she had received a miraculous healing. But she offered up her disappointments to God and accepted the life he had planned for her.

St. Gemma believed she saw and talked with her guardian angel every day, and she often sent him on errands for her, usually to deliver a message to her confessor in Rome.

St. Gemma suffered from many illnesses during her short life. Although she was healed of some of them, she was diagnosed with tuberculosis in January 1903. She died in April of that year, at the age of 25. She was beatified in 1933 and canonized in 1940.

Quote: “If I saw the gates of hell open and I stood on the brink of the abyss, I should not despair, I should not lose hope of mercy, because I should trust in you, my God.”

Prayer:  “O my soul, bless Jesus. Never forget the many graces he has given thee. Love that God who so loves thee. Lift thyself up to him, who has lowered himself for thee; show thyself as he shows himself with thee; be clean of heart, be pure. Love thy Jesus, who has lifted thee out of so much misery.”