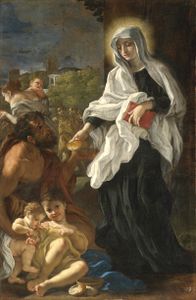 Born in 1384, to a wealthy, noble family, Frances inherited a quiet manner from her mother and a strong will from her father. She was 11 when she knew what God wanted for her – she was going to be a nun. But her father promised her hand in marriage to Lorenzo Ponziani, a noble, wealthy and respectable man. After much stubborn prayer, Frances yielded to her father’s will at age 13 and married Lorenzo. She thrust herself into the social life that was expected of her, only to collapse from strain. She lay close to death, unable to eat, move or speak. She had a vision of St. Alexis, who told her God was giving her an important choice: Did she want to recover or not? She whispered, “God’s will is mine.”

Frances and her sister-in-law, Vannozza, became close friends and went to Mass together, visited prisons, served hospitals and set up a secret chapel in an abandoned tower of their palace, where they prayed together. When disease brought famine to Rome, Frances insisted that no beggar was to be turned away. Her prayers caused the family granary to remain filled with corn, and the wine casks to refill miraculously. These incidents convinced her husband, Lorenzo, and his father that she was truly holy. Frances lost both her son, Evangelista, and her daughter, Agnes, during a period of civil war. Her husband was broken in mind and body, and Frances nursed him back to health.

With Lorenzo’s support, Frances started a lay order of women attached to the Benedictines, called the Oblates of Mary. They pledged to offer themselves to God and serve the poor. After Lorenzo’s death, Frances moved into the house with the Oblates and was made the superior.

At 52, she lived the life she had dreamed of since the age of 11. She died four years later. Her last words were “The angel has finished his task — he beckons me to follow him.”

Saint Frances of Rome is the patron saint of motorists, perhaps because of the tradition that an angel lit the road before her with a lantern to keep her safe when she traveled. She was guarded for 23 years by an archangel visible only to her.