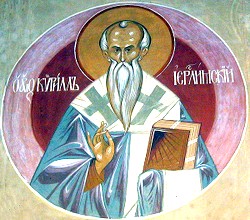 St. Cyril was born near Jerusalem in the year 315. It was a time when the Arian heresy, which denied the divinity of Christ, threatened the Church.

Well-educated, especially in the study of the Scriptures, he was ordained by St. Maximus and succeeded him as bishop of Jerusalem around 350. His episcopate lasted until his death, but he got caught up in the Arian controversy of the time, accused of Arianism by Saint Jerome, who had a reputation as a fierce defender of the faith.

Saint Cyril was also accused of other wrongdoing and spent 16 years of his episcopate in exile, sent away by emperors influenced by the Arian bishop of Caesarea who claimed ecclesiastical jurisdiction over Jerusalem. The Council of Antioch later dispatched Saint Gregory of Nyssa to investigate Cyril and his diocese. Saint Gregory cleared Saint Cyril's name, reporting that, while Jerusalem was rife with factionalism and Arianism, Cyril was orthodox.

After being ordained a priest, Saint Cyril was given the task of educating those preparing to enter the faith. His writing brings to light the theology of the Church in the mid-fourth century and is still treasured today.

Pope Leo XIII named Saint Cyril a doctor of the Church in 1882.