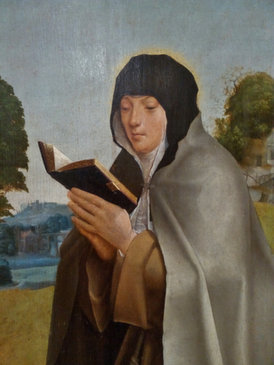 St. Colette, or Nicolette, as she was sometimes known, was a religious reformer who founded 17 Franciscan convents and brought many others back to their original rule, despite much opposition and abuse. She traveled throughout France, Savoy, Burgundy, Flanders and Spain spreading her message. One branch of the Poor Clares is known as the Colettines in her honor. While she was blessed in her mission by the schismatic Pope Benedict XIII, who professed her as a Poor Clare and made her superior of all Franciscan convents she might found or reform, she worked with St. Vincent Ferrer to heal the papal schism and return the papacy to its rightful path.

Colette’s parents were nearly 60 years old when she was born in 1381 in Picardy, France. She was named Nicolette in honor of St. Nicholas of Myra. Colette was attracted to religious life from the time she was a child, and she let nothing stand in her way: not her guardian’s wishes that she marry; not her rejection by two different religious orders; not even the abuse, slander and accusations of sorcery with which she was met when she tried to preach her message of religious reform.

Colette, as a follower of St. Francis of Assisi, had a great love of animals. She was also deeply devoted to the mysteries of Christ’s passion, fasting every Friday while meditating on the Passion.

While Colette was an anchoress – a kind of hermit who was walled into a cell which had as its only opening a grilled window into a church – she had visions of St. Francis of Assisi, who told her to reform the order of St. Clare to its original severity. When she was unsure about following the vision, she was struck blind for three days and mute for another three days. She took these trials as a sign that she needed to follow St. Francis’ bidding.

While in a state of ecstasy after receiving holy Communion, St. Colette foretold the date of her own death. She died of natural causes on March 6, 1447, in Belgium. She was 66 years old.

Quote: “If there be a true way that leads to the everlasting kingdom, it is most certainly that of suffering, patiently endured.”

Prayer: St. Colette, you followed your heart and worked to make your vision a reality, even though many others opposed your work. Help us to persevere in the face of challenges, and to always follow God’s will for us, even when it seems impossible to do. We ask this through Jesus Christ, our Lord. Amen.