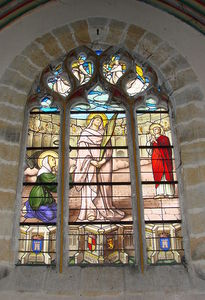 Perpetua and Felicity were two of the most popular saints in the early Church. Vivia Perpetua was a 22-year-old mother of an infant. Felicitas (Felicity) was a pregnant slave. Both were catechumens. Both were arrested for being Christian. They were imprisoned with three fellow catechumens. Their catechist, Saturus, voluntarily joined them in jail, and they were martyred in 203 A.D., as part of the gladiatorial games in Carthage.

Perpetua wrote of her prison ordeal in her diary, which became one of the most famous accounts in the early Church of the suffering of the martyrs.

While in jail, Perpetua had a vision that she would ascend a golden ladder to heaven and would suffer martyrdom. She saw Saturus waiting for her at the top of the ladder.

After confessing their Christianity to the judge Hilarion, Perpetua and Felicity were beaten on the face and then kept for the gladiatorial shows. Felicity gave birth to her daughter just days before her scheduled death, and her baby girl was immediately adopted by other Christians. At the games, the women were first attacked by a mad heifer, which injured but did not kill them. Inexperienced gladiators were dispatched to kill them, and Perpetua had to guide the sword of her nervous executioner to her own throat.

Perpetua and Felicity were universally honored, and their names occur in the canon of the Mass from early Church history. By the fourth century, their acts were read publicly in the churches of Africa and were so popular that St. Augustine, as Bishop of Hippo, had to protest that they should not be ranked with sacred Scripture.