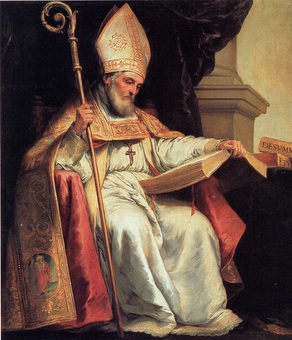 St. Isidore of Seville was a scholar, writer and fearless defender of the faith in the fourth and fifth centuries. He is considered among the last of the early Church fathers.

Isidore was born in Cartagena, Spain, around the year 560 to an influential family. He became Archbishop of Seville in Spain around the year 600, succeeding his older brother, Leander, who helped his younger brother develop a commitment to study and prayer.  Leander strove to convert the Visigoths, who had invaded Spain, to Christianity, work Isidore continued when he became archbishop.

Saint Isidore promoted systemic and extensive education of the clergy, seeing it as necessary to guard against false doctrine.  His most prominent work, the "Etymologiae," was the first Catholic encyclopedia. It was used for centuries in seminaries and schools. Because of this notable contribution, and because he believed that knowledge in all areas of study can be used at the service of the Gospel, he was declared the patron saint of Internet users.

Saint Isidore was known as a charitable archbishop, giving many of his possessions to the poor.

Along with Isidore, his brother Leander and younger brother Fulgentius were canonized, as was his sister Florentina, a nun.