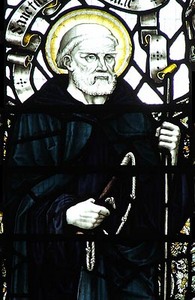 Related to the royalty of Mercia, Guthlac was a young man when he began to serve in the army of Mercia’s King Ethelred. This so-called army may have operated more like a band of thieves, ravaging the countryside along the Welsh border and collecting extensive bounty. After nine lucrative years in the king’s service, Guthlac abandoned this way of life. Filled with remorse, Guthlac took his vows and gave much of his war booty back to his victims. Then he joined a Benedictine abbey at Repton in Derbyshire, England. His austere lifestyle, however, made him unpopular with the other monks. Guthlac longed for a life of solitude and began his search for an isolated place to live as a hermit.

Around 699, Guthlac and a few companions moved to a remote, marshy island in the Fens that was thought to be “haunted by evil spirits and monsters.” They settled in, although Guthlac apparently hated it there. Guthlac lived a life of severe penance, subsisting on bread and water, eating only after sundown.

Word of Guthlac’s sanctity and his gift of prophecy spread. Despite his isolation, many came to seek his advice. This included the bishop of Litchfield, who had ordained Guthlac. Supposedly, Guthlac even predicted his own death.

One day, Guthlac gave sanctuary to Ethelbald, who was fleeing his cousin, Coelred. Guthlac told Ethelbald that he would be king one day. Ethelbald promised to build Guthlac an abbey if his prophecy became true. Ethelbald did become king, and even though Guthlac had died two years previously, Ethelbald kept his word and started construction of Croyland Abbey on St. Bartholomew’s Day, 716 AD.