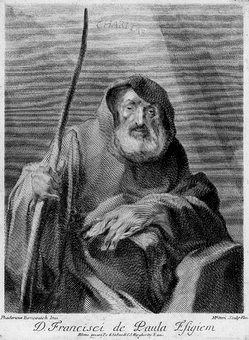 St. Francis of Paola was born in the region of Calabria, Italy, in 1416. His parents had a strong devotion to St. Francis of Assisi and named their son after the saint. When he was 13, Francis was placed in the care of Franciscan friars to be educated and decided to live according to the rule of their religious offer.  A year later, Francis accompanied his parents on a pilgrimage to Assisi, Rome, and the Portiuncula chapel, site of St. Francis of Assisi’s visions.  After the pilgrimage, although only age 15 at the time, Francis sought his parents’ permission to live as a hermit.

Francis’ desire was to be the “least in the household of God.” Within four years, he received the first followers who had come to imitate his way of life. Seventeen years later, when his disciples had grown in number, he established a rule for his austere community and sought Church approval. The Hermits of St. Francis of Assisi were approved by the Holy See in 1474.  In 1492, Francis changed the name to the “Minimi” (or “Minims”), meaning “the least,” signifying their commitment to humility.

Although it was Francis’s desire to be a contemplative hermit, he also believed that God was calling him to apostolic life. He began to use the gifts he had received, such as the gift of prophecy, to minister to the people of God.

Francis’ work caught the attention of European kings and nobility, as well as popes and bishops.  At the request of Pope Sixtus IV, Francis traveled to Paris to help Louis XI of France prepare for his death. While the king was hoping for a miraculous healing, Francis advised him that he should not fear death but, rather, be more concerned about his eternal fate.  Francis became the king’s spiritual adviser and ended up influencing national politics.  That included restoring peace between France and Brittany and between France and Spain.  The king died in Francis' arms in 1483.

Louis XI's son and successor, Charles VIII, kept Francis as an adviser.  Despite his status at court, Francis did not break from the monastic rule he had developed while living in his hermitage outside of Paola. He continued as superior general of the Minim order and founded new monasteries in France.

When he was 91, sensing the end of his earthly life was near, Francis returned to living in complete solitude for three months to prepare himself. When he emerged, he gathered a group of the Minim brothers and gave them final instructions for the future of the order. He died on Good Friday, April 2, 1507. Twelve years after his death, he was canonized by Pope Leo X.