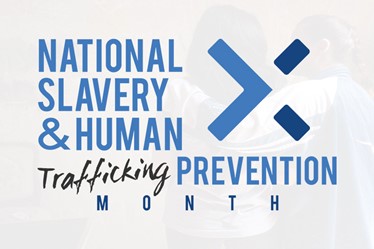 PORTLAND---Tuesday, January 11, is National Human Trafficking Awareness Day, a commemoration that seeks to increase understanding among Americans that human trafficking happens in states and communities across the United States and there are ways it can be prevented. The month of January is National Slavery and Human Trafficking Prevention Month.

Calculated as a $150 billion industry, human trafficking is a form of modern-day slavery and occurs when a trafficker uses force, fraud, or coercion to control another person for the purpose of soliciting labor or services against his/her will. There are an estimated 40.3 million victims of human trafficking worldwide. The elimination of human trafficking is a priority issue for the Catholic Church as every life is a gift from God and is sacred, it deserves to be protected and nurtured.

“Confronted by desperation and fraud, women and men are still exploited through forced prostitution and labor against their will. To be clear, this is modern day slavery. It cannot be accepted in any decent society,” said Bishop Robert Deeley. “Human trafficking is a horrific crime against the basic dignity and rights of the human person and requires massive resources and focus at the local, state, and federal levels to eliminate the root causes that allow it to exist.”

Convened by the U.S. Conference of Catholic Bishop’s Migration and Refugee Services, the Coalition of Catholic Organizations against Human Trafficking (CCOAHT) consists of over 35 national and international agencies working to end human trafficking and support survivors. CCOAHT members advocate for stronger state and federal legislation, promote trauma-informed and survivor-centered services for victims, raise public consciousness, and press the private sector and consumers to prioritize slave-free supply chains. Here are outreach resources and online education regarding this topic for your use:

“The United States Conference of Catholic Bishops calls upon Congress to enact comprehensive immigration reform, which would provide legal avenues for men, women, and their families to enter the country and work legally and safely. Elected officials must collaborate to decisively build pathways that lead to the common good,” said the bishop. “On this occasion, let us resolve as Christians to raise awareness of what is happening in our communities and pray that the victims and survivors of human trafficking find freedom, waiting arms to offer safety, an understanding of their intrinsic value, and a path to healing.”

The World Day of Prayer, Reflection, and Action Against Human Trafficking is February 8, is the Feast Day of St. Josephine Bakhita. Born in the Darfur region of Sudan in 1869, St. Bakhita was kidnapped and enslaved as a child. Eventually she was sold to an Italian diplomat and taken to Italy, where she valiantly asserted her freedom with the help of the Cannossian Sisters of Venice. Through her faith, St. Bakhita realized the promise of liberty inherent in the human spirit. She lived out the rest of her life as a Cannossian sister, sharing her empowering testimony of human freedom and dignity. For more information about the commemoration, visit www.usccb.org/offices/anti-trafficking-program/february-8th-international-day-prayer-and-awareness-against-human.