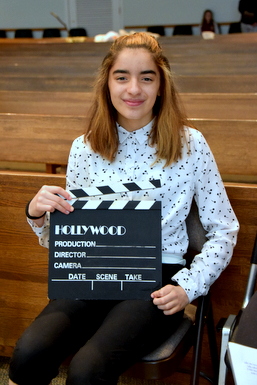 “In the spring of 1916, an angel appeared to three children tending sheep in a pasture in the village of Fatima, Portugal.”

So begins the play Fatima, which was recently performed by kindergarten through eighth graders at St. Anne Church in Gorham.

“I am the Angel of Peace, the guardian angel of Portugal. I ask you to pray for sinners and for peace,” the play continues.

The play was written and codirected by one of the faith formation students, Sadie Fiore, age 13. Sadie stepped forward to help when the idea for a play came up as a way to celebrate the 100th anniversary of the Fatima apparitions.

“They were throwing ideas around, and then I said, ‘Oh, I can make a play about it.’ Then Sister Jackie is like, ‘cool,’” Sadie says.

Although she had never tried her hand at being a playwright before, Sadie assured the group she could get it done. 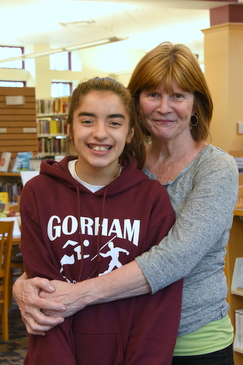 It was really neat to see her offer to do this and take this on,” says Sister Jackie Moreau, RSM, the director of religious education.  “Since she was very enthused to do this, I gave her one of those small story booklets and the kids’ version DVD, and she took it home and worked on it.”

Using the book, DVD, and websites, Sadie started putting some ideas together, assisted by her mother.  The challenge was to keep it short and easy to understand, knowing that younger children would be the actors since the shepherd children were ages 10, 8, and 7 when the Blessed Mother first appeared to them.

“The hard part was trying to cut it down and still keep all the important pieces in there,” says Cindy, Sadie’s mother.

“The ideas that came up the most we put in because they were obviously the most important,” says Sadie.

The play was first performed at a Fatima Family Day held at the church in February.  It was then tweaked a little before being performed again in May, the month of the first apparition. 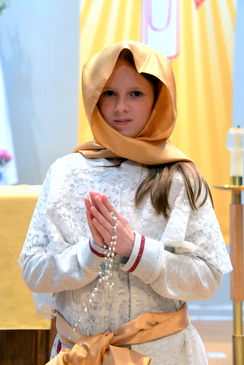 Roles included the Blessed Mother, the shepherd children, the angel, the mayor of the town, a priest, sheep, and the sun, which witnesses said appeared to dance in the sky during the final apparition.  Middle school youths served as narrators.

“It was a good act of empowering,” says Sister Jackie, stressing the importance of having the children do more than listen to lessons. “I’ve learned they benefit a lot more if they’re involved.

“It was a little difficult because there were some hard words, but it was fun other than that,” says Katelyn, age 10, who played the part of Our Lady of Fatima.

“It was fun, and it teaches about how Mary appeared to three children in Fatima,” says Colleen, age 8, who portrayed Lucia, the oldest of the shepherd children.

“I think that it’s a good chance for younger kids to learn more about Jesus and Mary,” says Noah Vaughn, a sixth grader, who played the part of the mayor.

“It was important because it made people pray the rosary more,” says Sadie. “That’s always important, because we need to respect Mary, our mother.” 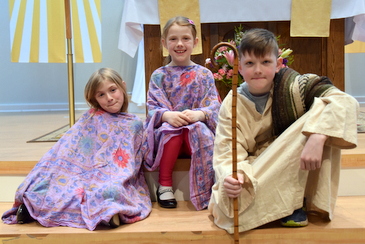 Although she admitted to having some doubts, Sadie gave the end result a thumbs up.

“It was cool because it was well done,” she says.

“I thought she did an amazing job,” says her mother.

“Sadie wrote this beautiful, beautiful play,” says Debbie Poissant, who assists Sister Jackie. “She did an incredible job, and we’re very proud of her.”