AUGUSTA--- Seeking to raise awareness about the problems of teen addiction, depression, and suicide and to pray for those affected by them, 11 teenagers will set off on a 70-mile pilgrimage that will take them from Augusta to Bangor.

The pilgrimage will begin on Wednesday, August 21, at 5:30 p.m. at St. Mary of the Assumption Church (41 Western Avenue, Augusta) and conclude on Sunday, August 25, with Mass at 10:30 a.m. at St. John Church (217 York Street, Bangor). This is the second year that a group will make the journey for awareness, but also hope. 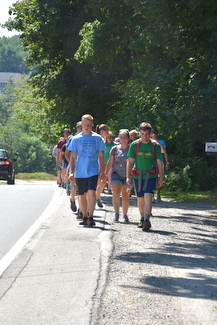 “We’ll be offering up the pilgrimage for people who are struggling with addiction or suicidal thoughts, so they might go out and seek help,” said Patrick Carter, age 18, from Vassalboro, who was the driving force behind the pilgrimage. “Offering a pilgrimage for a cause is a powerful form of prayer, and prayer is the only way to reach those teens who won't tell anyone about the feelings they have inside. This is the reason why we find it important to do this pilgrimage.”

Depending on speed and other conditions, the teenagers plan to walk about 20 miles each day with stops along the way, including lunch at the Maine Criminal Justice Academy in Vassalboro on Thursday and lunch at Leavitt Cemetery in Newburgh on Saturday. As it was last year, prayer will be a central part of their journey.

“It gives meaning to the pilgrimage,” said Caleb Furst, age 17, from Vassalboro. “If there is no prayer, if there is no sacrifice, it’s not really worth it. We’re just going for a walk.”

The teens said their prayers will be offered for those battling addiction and depression, as well as for the souls of those who have committed suicide, and they will also be praying that those who are struggling will turn to Jesus and the Church and find hope and healing through the sacraments of reconciliation and the Eucharist.

The idea for the pilgrimage came from Fr. Seamus Griesbach, director of the Office of Vocations for the Diocese of Portland.

“We knew we had a desire to try to make a difference in some way,” said Carter. “He suggested a pilgrimage, and we thought that was a great idea, especially so we can reach out through prayer to those people who might otherwise be unreachable, people who haven’t said anything to anyone.”

As they walk, the teens are carrying a flag that features a pilgrim shell surrounded by a turquoise ring, a color signifying awareness of the problem of addiction.