Igniting the Flames of Faith

At one point in her life, Christine Savage says she didn’t take her faith seriously at all. But inspired by her father and moved by the Holy Spirit, she says God came rushing back in.

“I knew I needed something more substantial in my life. Nothing else was working, nothing else I was going to, so I came back to the Church in a big way.”

When Christine, age 23, attended the University of Southern Maine, she says the Newman Club there fostered her faith, but off campus, she struggled to find something similar.

“I prayed so much for a group of friends who could support me in it because I didn’t really have any,” she says. “And then, this came along.”

“This” is a new young adult group called Ignite.   It was formed by young women and men with a desire to grow in their own faith and to share it with others.

“We were all seeking community. We just didn’t have one to find,” says Megan McMahon, age 23. “I think there is something to be said for having a group of people your own age who share your beliefs.”

Ignite was sparked in part by another young adult ministry group, Veritas, which was formed several years ago in Portland. That group, however, wasn’t as active as it once was, leaving a void.

“I feel like the timing was right, like the Holy Spirit put all the right people in the right place at the right time, and Veritas was passing the torch,” says Meg Clukey, age 24.

The four pillars of Ignite are holiness, faith, knowledge, and charity.  The group looks to provide opportunities for young adults to learn, to serve, and to socialize.

“I think, for each of us, the goal is to grow in personal holiness and to grow in relationship to Christ,” says Meg.

“We want to build up the community with the service component, growing in our faith and, also, just growing as friends. Because, there is no way around the human experience of having people around to support you,” says Christine.

The group’s regular activities include Saint Study, held Wednesday evenings at Catholic Charities’ Portland offices.  Since June, the young adults have gathered weekly to share a saint’s story and to examine the relevance of that saint’s message.

Take, for instance, the discussion surrounding Saint Eugene de Mazenod, founder of the Oblates of Mary Immaculate, who cautioned about being lukewarm in the faith, something he experienced himself when bogged down with responsibilities.

“It’s the idea that things that would normally produce an interior effect on you, because you’re doing them without interior passion, their very goodness is diluted and kind of lost,” says Al Konczal. “If you just approach things in your life in a lukewarm fashion, they’re never going to be special to you.”

“We often say prayers like the “Our Father” and “I believe,” but it should be more of a way of life, not just the prayer,” adds Adelle Saunders.

The discussion is free flowing, with different points of view expressed and welcomed.

“There is so much creativity in the group. The Holy Spirit, I think, moves people in different ways,” says Megan.

“It’s almost like, spiritually, we’re helping to raise each other, to nurture one another,” says Christine.

“And to challenge each other, too,” adds Meg.

In addition to Saint Study, Ignite sponsors the Hour of Power, an hour of adoration, praise, and worship open to people of all ages. First begun by Veritas, it is held the first Friday of the month in the chapel of the Cathedral of the Immaculate Conception in Portland. Bishop Robert Deeley led the hour in December

“Young people growing in relationship with Jesus -- what a wonderful grace that is," said the bishop

Members of Ignite also embrace Jesus’ call to serve others. This November, some volunteered at the annual Journey retreat, and the third Sunday of every month, they serve breakfast at the Preble Street Resource Center Soup Kitchen.

“It’s a great opportunity for us because the food kitchen was having problems where they weren’t getting volunteers on Sunday mornings,” says Megan.

After the breakfast, the young adults often head to the cathedral for the 10 a.m. Mass.

Ignite leaders plan social activities as well, for instance going out to dinner or going apple picking.  Christine says those are especially good opportunities for those who might not yet be comfortable participating in the Saint Study or service work.

“We do get more people then, just to kind of check things out,” she says.

Although most of the group’s regular activities are centered in Portland, members come from as far away as Lewiston and Sanford.

“Something we also tried to do is to make sure we’re not under any specific parish, because we want to make it open to all members of all parishes,” says Meg.

Members come from many different backgrounds.  Meg is a medical student, Christine is a nurse, and Megan is a marketing research analyst.

"We have doctors, nurses, people in the insurance business, you name it," says Anthony Canarie, another founder of the group. "The driving thread in everybody is that we are all called to our faith, to our Church, and to seek God's grace."

Their goal now is to attract new members. The group is open to those in their twenties and thirties.

“We know there are a lot more people in this area that we can reach. It’s a matter of finding them,” says Megan. “That is one of the reason we have business cards. We hand them out to people after Mass, after adoration.”

“We want to reach people who maybe were in the same positions we were, maybe looking for community, wanting to grow in faith,” says Christine. “Some people feel very alone out there.” 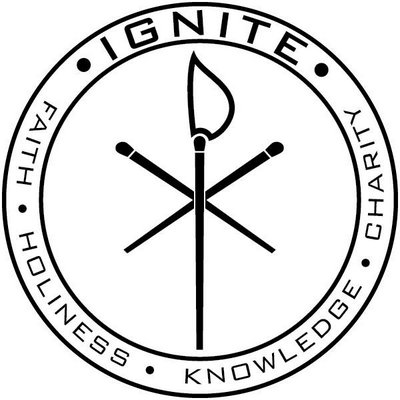 Ignite has already exceeded the expectations of its leaders.

“In terms of what I imagined it to be, it’s gone way far beyond that.  I just had this idea that, ‘Oh, I want to support my own faith and meet other people,’ and that was blown away by everything that has happened here,” says Meg.

“To me, it was also to have the support of other people, but now, it’s grown to us supporting others and bringing other people into the group,” says Megan.

While it may seem like a lot of work, the leaders say they share the responsibility so no one shoulders it all. They also say they've had a lot of help, both practical and spiritual.

“I feel like a lot of people are praying for us,” says Meg.