GREENVILLE---Five years after it began, and to the joy of church members and the community, the goal and objectives of the “Beginning a New Century of Faith” capital campaign at Holy Family Parish in Greenville have been met.

“We praise God for his faithfulness and the generosity of the hundreds and hundreds of parishioners and friends of Holy Family Parish,” said Fr. Hyacinth Fornkwa, pastor of the parish.

Launched in 2016, the campaign aimed to raise over $2 million to construct a new church, parish hall, and offices, as well as renovate the current rectory.

“We had been talking for probably eight or ten years that the building was deteriorating, and we’d been putting band aids on it, trying to keep it, but it got to the point that it was better to invest in a new building,” said Elizabeth Foote, a member of the parish’s development committee. “We have a lot of older parishioners. We’re an aging community, and they couldn’t come to the Mass because of the stairs.”

“The foundation leaked, and it was poorly insulated among many other issues. It would have been a lot to repair it,” said Steve Bilodeau, chair of the parish’s building committee. “But then, you’re still left with a century-old church that is difficult to get in, and that isn’t designed for the community.”

Construction on the new church began in early 2017 and in March of 2018, Bishop Robert Deeley joined the parish community for a dedication Mass held inside the beautiful new building.

“Today, we come before you to dedicate to your lasting service this house of prayer, this temple of worship, this home in which we are nourished by your word and your sacraments,” the bishop said in the Prayer of Dedication during the Mass.

The new Holy Family Church stands on the same spot as the former church on Pritham Avenue and, unlike its predecessor, you don’t have to go outside and down steep stairs to get to the new adjacent parish hall. 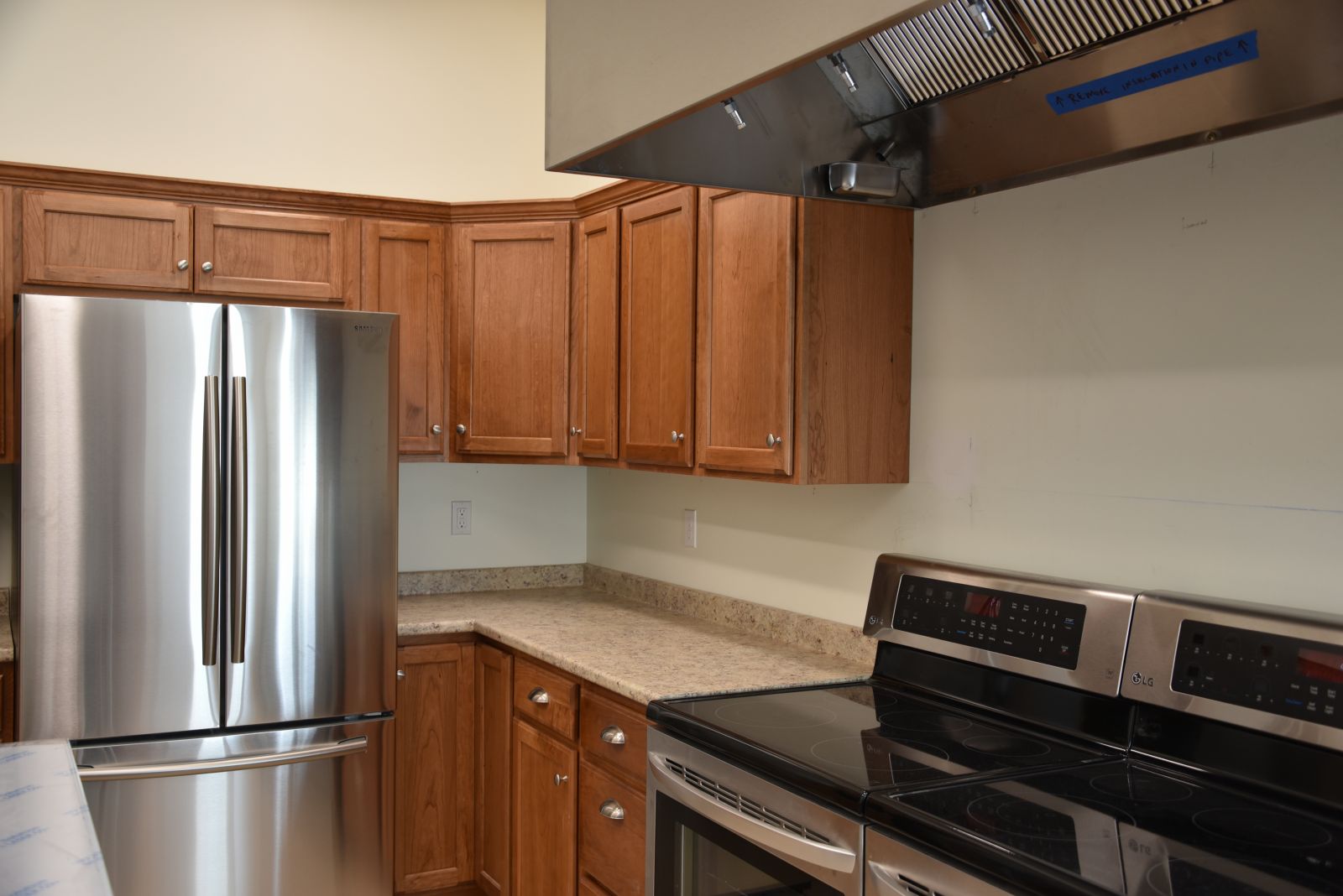 But there were obvious sentimental ties to the old church. The campaign enabled many of its features to be carried over and enhanced, including the presence of a steeple and beautiful stained-glass portrayals of the Holy Family, saints, and doctors of the Church; the original church’s baptismal font and tabernacle; one of the original crosses atop the steeple; and even the church’s 1920 reed organ which was also restored. The church also has a state-of-the-art, audio-video system, a modern heating system, and a digital carillon that can play thousands of hymns. 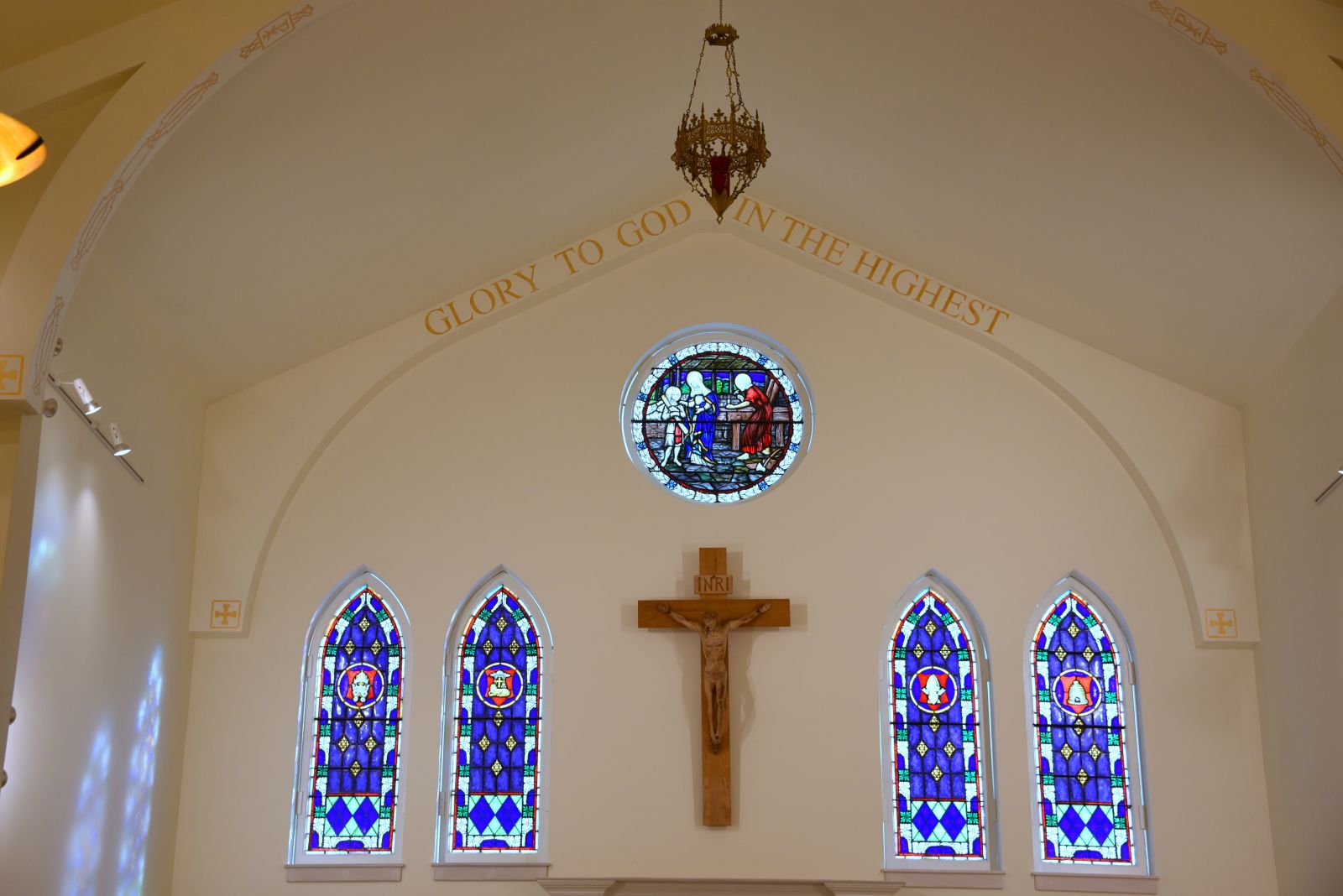 “The church, fundamentally, has exactly the same layout of the previous church. We retained most of the original artistic work, the windows and things like that,” said Bilodeau. “There is much better visibility because all the columns have been removed.”

The parish hall now has the capacity to seat over 150 people and includes a new kitchen. A paved parking lot and interior and exterior renovations at the rectory have also been completed. Making the goal is no small feat for a community that has a population of around 1500. Nonetheless, through numerous fundraisers and the generosity of parishioners, summer visitors, area businesses, other Christian churches, and organizations such as Catholic Extension, Catholic Charities, the Knights of Columbus, and the Daughters of Isabella, the estimated $2.3 million dollars have finally been collected.

“In addition to accomplishing the campaign’s primary goals, funds were raised to upgrade Holy Family Church’s front sign, the rectory’s heating system, and to save for future renovations,” said Fr. Fornkwa. “It’s amazing. We are so grateful.”