“Preach the Gospel Always. If Necessary, Use Words.” 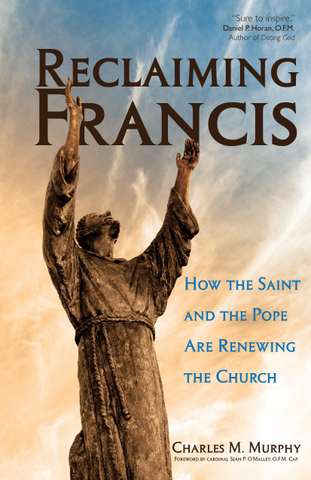 A few weeks before Pope Francis’s election as the new pope I had completed a book I had been researching on St. Francis of Assisi and the New Evangelization. Or so I thought.  Then came this amazing coincidence: the new pope embraced Francis as the model for his pontificate.  I immediately extended the deadline for the book’s publication so I could include Pope Francis, his personal witness and preaching.  The book, now available, is entitled “Reclaiming Francis.  How the Saint and the Pope Are Renewing the Church.” Cardinal Sean O’Malley, O.F.M., Cap., graciously provided the foreword.

What is “new” about the new evangelization is that its aim is not so much to preach the Gospel to unbelievers, as in the past, but to summon to conversion persons already baptized who have ceased church practice.  Often these “ex-Catholics” seek spiritual nourishment elsewhere thinking they understand what the Church is saying but and finding it insufficient.  In many cases, what they have is a child’s version of the faith having never encountered its freshness and beauty.

Last fall, Pope Francis gave a revealing interview with La Repubblica, a leading secular newspaper in Rome.  In it, the pope described how he, himself, came to believe. He began, he said, as it does for anyone, with a personal encounter with Jesus, which was sustained and nourished by being part of a community of faith. He then went on to explain why he is the first pope to take the name of Francis after St. Francis of Assisi:

Francis wanted a mendicant order and an itinerant one.  Missionaries who wanted to meet, listen, talk, help, to spread faith and love.  Especially love.  And he dreamed of a poor Church that would take care of others, receive material aid and use it to support others, with no concern for itself.  Eight hundred years have passed since then, and times have changed, but the ideal of a missionary, poor Church is still more than valid.  This is still the Church that Jesus and his disciples preached about.

Last August, Pope Francis gave an interview to fellow Jesuits published in La Civilta’ Cattolica that caused a similar sensation for its candor and directness.  The interviewer asked point blank, “Who is Jorge Mario Bergolio?”  The pope answered, “I do not know what might be the most fitting description.  I am a sinner.  This is the most accurate definition.  It is not a figure of speech, a literary conceit.  I am a sinner whom the Lord has looked upon.”

“Preach the Gospel always.  If necessary, use words,” is a quotation often attributed to St. Francis who was known among his contemporaries as “il poverello,” “the little poor one.” Whether he actually said this, he certainly lived it.  The ministry of preaching repentance and conversion to the Gospel way of life was for Francis deeply connected to intense personal prayer, the practice of penance, and the witness of charity. Word and witness have to be one and the same.

On one occasion, St. Francis felt compelled to accept the invitation of St. Clare to preach to the nuns in her convent.  How could he possibly fulfill all the expectations placed upon him to live up to his reputation and preach a life-changing word?  Francis at first just stood there in front of the nuns in the chapel.  The silence began to be embarrassing.  He raised his eyes to heaven, where his heart always was, and began to pray to Christ.  He then asked that ashes be brought.  He made a circle with them around himself on the pavement and sprinkled the rest up on his head. The nuns waited for him to begin, but Francis remained standing in silence.  They began to become uncomfortable.  Then suddenly, to the nuns’ amazement, instead of a sermon, he began reciting Psalm 50, the psalm which begins, “Have mercy upon me O God for I am a sinner.”  When he had finished, he quickly left.  Clare and her sisters were so filled with contrition because of the power of this symbolic sermon that tears flowed from their eyes, and they were inspired to increase their own personal penance.

The life and progress of the Church, as we look back upon it, are not in a straight line. After Jesus charged the apostles to preach the Gospel “to the ends of the earth,” it might seem that everything would be onward and upward.  In fact, the history of the Church reveals a pattern of growth and vitality followed by a period of decline and loss of influence, to be succeeded on occasion by powerful renewal.

In his lifetime, St. Francis of Assisi launched what is generally recognized as the greatest spiritual renewal the Church has ever known.  When he died, there were no less than 17,000 Franciscans.  Pope Paul VI, who identified as the Church’s essential mission to evangelize, stated, “People today listen more to witnesses than to teachers.  Witnesses to Jesus Christ demonstrate their faith especially by the witness of poverty and detachment, of freedom in the face of the powers of this world, that is, by the witness of a holy life.” It is easy to see why Pope Francis chose St. Francis of Assisi as his model in witnessing to the Gospel in our day.

In November, Pope Francis made his first state visit to the President of the Italian Republic at the Quirinale palace, formerly the summer residence of the popes in Rome.  In another of his breaches of protocol and security, the pope made his journey across the city in a simple blue Ford Focus and a tiny motorcade – no sirens, no armed guards.

Soon after his election as pope, Pope Francis, like Francis of Assisi, set forth the Cross of Christ as the object of our preaching and witness. He said, “When we journey without the Cross, when we build without the Cross, when we profess Christ without the Cross, we are not disciples of the Lord, we are worldly. We may be bishops, priests, cardinals, popes but not disciples of the Lord.  My wish that all of us will have the courage, yes the courage, to walk in the presence of the Lord, with the Lord’s Cross; to build the Church on the Lord’s blood which was poured out on the Cross; and to profess the one glory: Christ crucified.  And in this way, the Church will go forward.”

Msgr Charles M. Murphy, S.T.D.
Director of the Diaconate
Author of  “Reclaiming Francis.  How the Saint and the Pope Are Renewing the Church,” Ave Maria Press 2014.