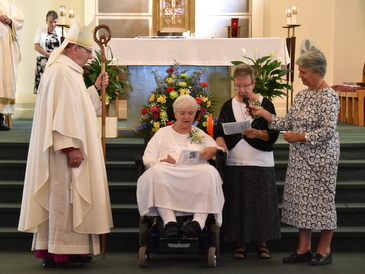 Two members of the Dominican Sisters of the Roman Congregation, jubilees with a Mass celebrated by Bishop Robert Deeley at Holy Cross Church in Lewiston on Sunday, August 25, 2019,

Sister Francesca Cloutier, who is originally from Lewiston, is celebrating her 60th jubilee, while Sister Therese Demers, a Skowhegan native, made her temporary commitment to the sisters 50 years ago.

“God has been always the One there in my life. I knew him when I was very little, and I always talked to him,” said Sister Francesca. “When I entered the convent, it was just going to meet my loved one.” 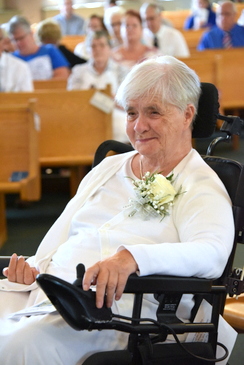 “He’s the anchor that has sustained me all my life -- in difficult moments, in good moments,” said Sister Therese. “For me, God is always there.”

Both sisters credit the presence of the Dominican Sisters in Lewiston Catholic schools for helping them recognize their call to religious life.  Sister Francesca had the sisters as teachers both at St. Peter School and St. Dominic High School, while Sister Therese, whose family moved from Skowhegan to Lewiston, first encountered them at St. Dom’s.

“One day, one of the sisters asked if I had ever thought of religious life. Of course, I dismissed the idea, but it was the sowing of the seed,” she recalled. “I really love their focus on the word of God, the Order of Preachers, so your whole life is focused on God’s word and Scripture.  I love the Scriptures.  I had a Scripture class in high school, and that opened a new door for me.” 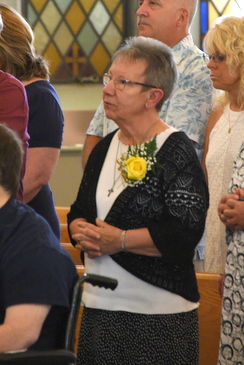 Sister Therese began her religious formation in Brookline, Massachusetts, but then went to Rome, Italy, to complete her religious training. After returning to the United States, she taught elementary education, first in Brookline and then in Staten Island, New York. She made her final commitment to the Order in 1975, and then was assigned to Davenport, Iowa, where she continued to teach, while studying for her master’s degree in counseling and theology.  She would go on to serve as a pastoral associate at several parishes in Iowa, before returning to Maine in 1997, where she became coordinator of the Dominican Retreat House in Litchfield. She then took clinical pastoral education courses, which led to her becoming chaplain at Central Maine Medical Center in Lewiston. She served there for 13 years until retiring in 2016.

Sister Therese has also held leadership positions within her community and province, and in 2017, she was elected to serve as a general counselor for the congregation, a ministry that takes her around the world to meet with sisters.