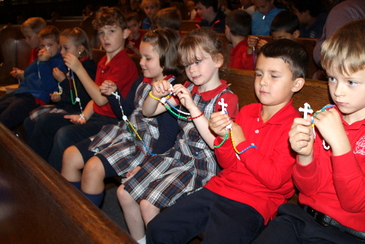 Embracing missionaries around the world in prayer, Catholic school students across the Diocese of Portland joined in praying the World Mission Rosary on October 7 as part of the diocese’s celebration of Extraordinary Missionary Month.

Pope Francis declared October 2019 as Extraordinary Missionary Month to draw attention to the ongoing need to serve our brothers and sisters around the world and to bring Christ’s Gospel message to them.

“I think it’s important because there are countries that are in need right now, that are suffering, that have unfair laws,” said Joshua, a sixth grader at St. James School in Biddeford. “It gives people hope that things might get better.”

Each decade, or 10 beads, of the World Mission Rosary is a different color, representing a different region of the world.

“The yellow represents Asia. The blue represents the Pacific Ocean and the islands in it. The white represents Europe. The red represents the Americas, and the green represents Africa,’ said Hannah, a sixth grader from St. Thomas School in Sanford.  “It’s because all the missionaries are currently there. So, we just want to pray for them.”

Each school added their own special touches to their celebration.  At St. James School in Biddeford, for instance, different grades dressed in the colors of the rosary.  Kindergarten and eighth graders wore green, while first and seventh graders donned blue. Second and sixth graders wore white, preschoolers and fourth graders wore red, and third and fifth graders shone in yellow.

The students, faculty, and staff gathered in a central corridor to pray the rosary, which was preceded by the singing of the hymn “Hail Mary, Gentle Woman.” The rosary prayers were then led by students.

“We’re doing the live rosary because October is the month of the rosary, and all the schools in this region are doing something special,” said Serenity, an eighth grader.

At St. Thomas School, sixth and seventh graders created a large mission rosary out of different colored balloons.  The student leaders then moved from balloon to balloon as each Hail Mary was prayed.

“We prayed two decades in Spanish and the others in English,” explained Zoey, a fifth grader at St. Thomas. “We did it to pray for the missions today.”

The prayers included special intentions for missionaries and those they serve. Students, faculty, staff, and visitors prayed for the good news of Christ to be proclaimed to the world, that children served by the missions, especially the poor and homeless, may come to know the love of Christ, that Catholic families of the missions may, by the example of their lives, show the love of Christ to their neighbors, and that missionaries who travel long roads to bring Christ to those in need may be strengthened in faith and holiness.

“It was important to do that because we wanted to let them know that we’re thinking about them,” said Avila, a fifth grader.

Students at Holy Cross School in South Portland, St. John's Catholic School in Brunswick, and St. Michael School in Augusta prayed the rosary together at their nearby churches.  In each case, students led the prayers.

“We do the rosary to get closer to God,” said Kaitlin, an eighth grader at Holy Cross.

“It’s all just to get closer to God and have a better relationship him,” agreed Tobey, also a Holy Cross eighth grader.

The students were all given World Mission Rosary beads, many of which were made by the Rosary Makers of Mary Immaculate in Augusta, a group that has been making rosary beads to donate locally and to mission countries for more than 25 years.  A special friend of the Abbey gift store in Scarborough also made and contributed beads.

October 7 was chosen for praying the World Mission Rosary because on this day the Catholic Church celebrates the Feast of Our Lady of the Holy Rosary, and in addition to being Extraordinary Missionary Month, October is the month of the holy rosary.

The World Mission Rosary was envisioned by Archbishop Fulton Sheen in 1951, who made a request on his radio show that his listeners “embrace the world in prayer” through praying the rosary, a series of prayers that help us reflect on the mysteries of salvation.

“The rosary is a special set of prayers to God that help us to remember the most important events in the lives of Mary and Jesus. These events are called the mysteries,” Hannah explained, as she began the prayers at St. Thomas School. “Each group of mysteries relates to one group of ten beads on the rosary.”

The Diocese of Portland has Catholic schools in Auburn, Augusta, Bangor, Biddeford, Brunswick, Lewiston, Portland, Sanford, South Portland, Waterville, and Winslow. If you would like to learn about the many ways our Catholic schools are making a difference and bearing witness to the love of Christ, visit www.mainecatholicschools.com.