Biddeford Native to Be Ordained to the Priesthood on August 22 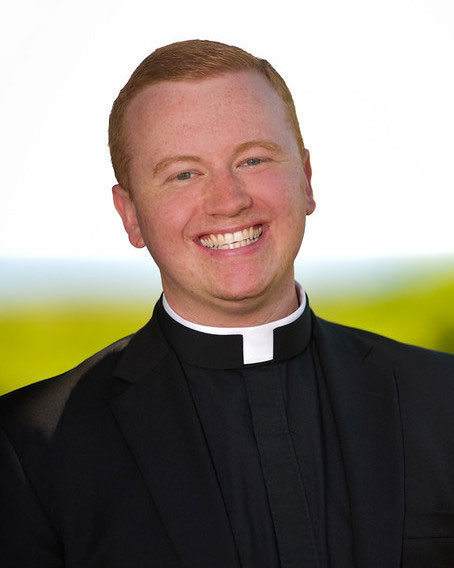 BIDDEFORD---About 1,500 feet from where he attended St. James School as a young boy, Deacon Alexander R. Boucher will be ordained to the priesthood by Bishop Robert P. Deeley on Saturday, August 22, at 10 a.m. at St. Joseph Church, located on 178 Elm Street in Biddeford.

The journey has been anything but short for Deacon Boucher; the blessed path bringing him home has been navigated through embracing God’s plan for him.

During the ordination Mass, Boucher will affirm his willingness to become a priest. He will resolve, with the help of the Holy Spirit, to discharge without fail the office of priesthood; to exercise the ministry of the word worthily and wisely; to celebrate faithfully and reverently the mysteries of Christ, especially the sacrifice of the Eucharist and the sacrament of reconciliation; to pray without ceasing for God’s mercy upon his people; and to consecrate himself to God for the salvation of all. While placing his hands within the bishop’s, Boucher will promise respect and obedience to him and his successors.

The Mass also includes the Litany of the Saints, during which Boucher will lay prostrate in front of the sanctuary. The litany is a prayer for the intercession of the saints and for the Holy Spirit to send down his gifts upon the man being ordained. Following the litany is the solemn Prayer of Ordination, during which the bishop will ask the Lord to "grant us this helper that we need to exercise the priesthood that comes from the Apostles.” It is as this prayer concludes that Alex Boucher will become Father Alex Boucher.

Once vested, the bishop will anoint Boucher’s hands with sacred chrism, asking the Lord to “guard and preserve you that you may sanctify the Christian people and offer sacrifice to God." After being welcomed by priests in attendance with a fraternal kiss of peace, he will join Bishop Deeley and the other priests in celebrating the Eucharist.

A graduate of Cheverus High School in Portland, Deacon Boucher says the path to his ordination leads back to his childhood in Biddeford, where the first seeds of his vocation were planted.

“My earliest childhood memories really are of being dropped off at my grandparents’ house in the morning, at some very early hour, and going to daily Mass in the old convent chapel at St. André with my grandmother,” he says. “She would babysit me and bring me to daily Mass with her. She sang and still sings in the funeral choir in Biddeford. I remember going with her as a really young kid and sitting on the floor with a bag of crackers and a notebook and doodling while she sang.”

At age four, he remembers attending the first Mass celebrated by newly ordained Father Daniel Greenleaf. Deacon Boucher says he was struck by the number of priests processing into St. Joseph Church in Biddeford, where the Mass was celebrated.

“As a four-year-old, I had never seen that before. I had never seen a young priest,” he says. “I distinctly remember tugging on my dad’s shirtsleeve and saying, ‘I want to do that when I grow up.’ So, at four years old, there was certainly something there that was attractive to me. God was working there at a very young age.”

Of course, he says, he also had boyhood aspirations to be a firefighter, police officer, and teacher, among other career choices.

Nevertheless, the thought of a priestly vocation remained and received some nurturing through 10 years attending St. James School in Biddeford, from preschool to eighth grade.

“St. James School was a very important and formative place for me,” he says.

He also recalls Father Renald Labarre, a family friend, talking with him about the priesthood and sharing what a wonderful way of life it was, something he fondly recalls as his first vocation chat.

At Cheverus, he met Father George Collins, SJ, who was still in formation for the Jesuits at the time and not yet ordained. Collins taught theology in a manner that Boucher found captivating.

“I just remember being drawn right away by not just the subject matter but by him, as someone who had, a little later in life, decided to surrender to God’s call for him. That was really inspiring to me,” Boucher says. “His influence was very powerful for my young mind and my young discerning heart.”

Boucher was also active in youth ministry when he was a teenager. He helped develop a youth ministry program in the Biddeford/Saco area and served for two years as a member of the former Maine Diocesan Council for Catholic Youth, helping to plan diocesan youth events.

“That introduced me to the broader diocesan Church,” he says. “It really was good exposure and experience for me just to get a sense of the diocese as a local church. There is something attractive about that.”

Deacon Boucher said, however, that it really wasn’t until college that he really started opening his heart to the possibility God was calling him to the priesthood. He attended The Catholic University of America (CUA) in Washington, D.C., where he found many like-minded students.

“It was amazing, early on in my freshman year in college, having conversations in the dining hall or in the dorm, just with new friends. We weren’t all saying right out of the gate, ‘Oh, I’m discerning a vocation to the priesthood,’ but pretty quickly, we realized there a common thread among many of us.”

Boucher became connected with campus ministry, participated in a men’s discernment group, regularly served at the Basilica of the National Shrine of the Immaculate Conception, and became a member of the Knights of Columbus. He credits the chaplain of the Knights, Father Frank Donio, SAC, for helping him to conquer his fears of following God’s will.

“He is one of the biggest mentors in my life to this day and just a dear friend,” says Deacon Boucher. “He was just challenging me to get out of my own way and, in a sense, kind of stop dragging my feet.”

It was through his connection to Father Donio that Boucher got a job with the Catholic Apostolate Center in Washington, D.C., which seeks to collaborate with dioceses and organizations to form programs for the new evangelization. He would later also work as a project administrator for the National Leadership Roundtable on Church Management, also in Washington, D.C.

When he was in his junior year at CUA, still unsure in which direction he wanted to head, Boucher decided to take time off. It would lead to a new opportunity in the Diocese of Portland, working as a pastoral associate for the Portland Peninsula & Island Parishes, while also continuing to work for the Catholic Apostolate Center and the Leadership Roundtable.

He said having positive interactions with the priests serving in the Portland parishes gave him a fuller picture of what it meant to be priest. Still, he was conflicted because he was also having success serving the Church as a layperson.

Boucher returned to CUA to finish his degree but came back to Maine to assist with the installation of Bishop Deeley. He said it was a conversation with the bishop after the installation Mass that finally helped him move forward in pursuing his vocation. He said the bishop kept asking him, what was next for him, finally telling him, “I encourage you to listen to the Holy Spirit whispering to you, speaking to you in your heart. I think I can hear it, so you certainly can.”

Boucher said the bishop then walked away, leaving him to ponder those words.

“There were so many of those hinge moments,” Deacon Boucher says. “They’ve all been encouraging conversations with priests and, ultimately, with Bishop Deeley that really kind of spurred me into action.”

Bishop Deeley assigned Boucher to Saint John’s Seminary in Brighton, Massachusetts. In June of 2019, he was ordained to the transitional diaconate by Bishop Deeley.

“I’m feeling ultimately grateful to God for the many graces and blessing he has bestowed on me over the course of my life,” he said. “I’ve realized more and more that I am simply responding to a call that I have discerned over time. This journey has included great joys and unique challenges. I continue to rely on the assistance of God to conform my life more and more to Jesus Christ."

Attendance at Deacon Boucher’s ordination to the priesthood will be by invitation only due to the seating limits imposed by COVID-19 restrictions.