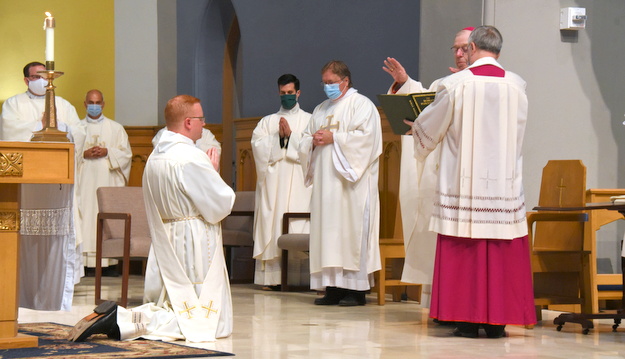 That is how Father Alex Boucher summed up his feelings after being ordained as the newest priest of the Diocese of Portland.

“I’m overjoyed and thankful to God, to Bishop Deeley, and to our diocese for today. It’s been a whirlwind,” he said. “It’s hard to put into words the excitement of my ordination to the priesthood finally arriving.”

Boucher was ordained on Saturday, August 22, by Bishop Robert Deeley at St. Joseph Church in Biddeford, the church of his childhood, where he was confirmed, made his first Communion, and was an altar server.

“God has led you here; He has created you for this moment,” Bishop Deeley said during his homily. “You have taken time to discern, but what you have discovered is that God has intended that you are destined for the service of priesthood." 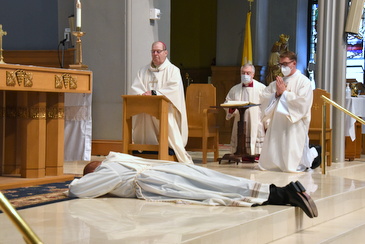 Father Boucher’s ordination was originally scheduled to take play in May, on the Solemnity of Pentecost, but those plans were disrupted by the COVID-19 pandemic. Although the delay was difficult, Father Boucher said he learned to pray for patience, which was rewarded in the choice of the new date, special to him because of his devotion to the Blessed Mother.

“When I found out that the ordination date was going to be delayed, a friend encouraged me to pray to Our Lady. I could hardly hide my excitement when Bishop Deeley told me that he had chosen a new ordination date: August 22, the day when the Church celebrates the Queenship of the Blessed Virgin Mary,” he said. “The Blessed Mother is a powerful intercessor.”

The pandemic meant some other changes in addition to the date, although the Rite of Ordination itself remained unaltered.  Only 50 people could gather in the church, meaning only the front pews were filled with family members.  The 20 priests present, fewer than would normally gather for an ordination Mass, were seated in the sanctuary in chairs set six feet apart.   Fifty additional well wishers gathered in the parish hall below, watching on a video screen, while others were able to view the Mass online via livestream.  Instead of a full choir, a single cantor accompanied by organist Helene Fortier provided the music for the Mass.

“You will always remember that you became a priest in the midst of the pandemic. And you will play an important role in the Church’s healing and rebuilding of our society in the wake of this deadly disease that has swept away so many of our certainties and securities,” the bishop told Boucher. “You will now serve Jesus Christ the teacher, priest, and shepherd in his ministry, which is to make his own body, the Church, grow into a community, the people of God. And though the world is changed by this pandemic, the words of Jeremiah are still true: ‘I am with you to deliver you.’”

Despite the limited numbers in attendance, the Mass was a rich and joyous occasion. Among those present were Father Boucher’s parents and his grandmother, to whom he especially credits the early development of his faith.

“My earliest childhood memories really are of being dropped off at my grandparents’ house in the morning at some very early hour and going to daily Mass in the old convent chapel in Biddeford at St. André Church with my grandmother,” he says. “Exposure to the faith, I think, was such an important part of my childhood, just being brought up in a Catholic culture, which I don’t think I really realized it at the time.”

His mother, Lisa, said she knew since he was age two that he was being called to the priesthood.

“He would go to church with my mother-in-law. He would play Mass at home and make little Eucharists. When he was five, he dressed up as a priest for Halloween. We knew it was in him,” she said.

His faith was further nurtured at St. James School in Biddeford, which he attended through eighth grade, and then at Cheverus High School in Portland, before he chose to study theology at The Catholic University of America (CUA) in Washington, D.C.

“Through the journey, he was guided by good priests who saw the potential in this young man,” the bishop said. “The Catholic community in Biddeford, priests and people, Alex’s family, these are all the people who cared for Alex and provided the opportunity for him to listen to the voice of the Lord calling him to service as a priest.”

Those special priests included Father Renald Labarre, former pastor of St. Joseph Parish and a family friend.  Father Boucher said when he was age 12 or 13, he remembers Father Labarre visiting their home, telling him about the wonderful vocation of the priesthood and first posing the question: “Have you ever thought about being a priest?”  Because Father Labarre was so influential in his life, Father Boucher had intended to have him, as well as Monsignor Marc Caron, vest him in the stole and chasuble during the Mass. Unfortunately, Father Labarre now resides out of state and could not make the trip due to the pandemic.

“Father Renald Labarre, my pastor at St. Joseph’s Church in Biddeford growing up, has been an important spiritual father since childhood. He just celebrated his 60th anniversary of ordination to the priesthood. Unfortunately, he was unable to travel. Monsignor Marc Caron, who once served alongside Father Labarre in Biddeford, has been another strong priestly example for me for many years. Additionally, he was a professor and formator at St. John’s Seminary for the past four years, where I just completed my studies, before Bishop Deeley asked him to serve the diocese as the vicar general and moderator of the curia. Both Father Labarre and Monsignor Caron are priests that love the priesthood, and their example and quiet encouragement over the course of my life and vocational discernment made heeding the Lord’s call to the priesthood much easier,” Father Boucher said.

Another priest who helped Father Boucher embrace God’s call was Father Frank Donio, SAC, the chaplain of CUA’s Knights of Columbus Council, which Boucher joined while attending school there. Father Donio will deliver the homily at Father Boucher’s Mass of Thanksgiving on Sunday, August 23. The Mass, also set for St. Joseph Church, will be available via livestream (www.boucherordination.com).

During the Rite of Ordination, Boucher resolved to discharge without fail the office of the priesthood, to exercise the ministry of the word worthily and wisely, and to celebrate faithfully and reverently the mysteries of Christ, especially the sacrifice of the Eucharist and the sacrament of reconciliation.  He also resolved to consecrate himself to God for the salvation of all.

The bishop then asked God to “pour out abundantly the gifts of heaven” on Boucher who then lied prostrate while the Litany of Saints was sung. The litany invokes the intercession of saints, martyrs, and the Blessed Virgin Mary.

For Father Boucher’s father, Dan, watching from the front row, it was the most emotional part of the Mass.

“Tears came to my eyes because it just seemed like it was just him and God, just together at that point,” he said. “It was just beautiful.”

In the most solemn act of the ordination, the bishop then laid hands on Boucher in silence, invoking the Holy Spirit to come down upon Boucher and to set him apart for the special ministry of the priesthood. Boucher then moved to the front of the altar and all the priests, one-by-one, joined in doing the same.

“The laying on of hands by Bishop Deeley and all the priests gathered was a very poignant moment for me, as these priests who have been part of my life -- some for a brief time, many for many, many years -- laid hands on me. It was a very moving moment of the ordination for me,” Father Boucher said.

After the laying on of hands, the bishop prayed the Prayer of Ordination, asking the Lord to "grant us this helper that we need to exercise the priesthood that comes from the Apostles.”

Now a priest of the diocese, Boucher was vested with the stole and chasuble, symbols of the priesthood, after which the bishop anointed Father Boucher’s hands with sacred chrism, asking the Lord to guard and preserve him.  Boucher’s parents then carried a paten and a chalice to the bishop who presented them to Father Boucher, a reminder that the celebration of the Eucharist is at the heart of the priesthood.

The bishop then welcomed Father Boucher to the presbyterate with the fraternal kiss of peace. While normally all priests present would do the same, due to the pandemic, three priests greeted Father Boucher on behalf of the entire presbyterate. The three were Father Timothy Nadeau, pastor of Good Shepherd Parish, which includes St. Joseph Church; Msgr. René Mathieu, former pastor of Good Shepherd Parish; and Msgr. Paul Stefanko, the vicar for priests.

After the Rite of Ordination was completed, Father Boucher joined in the celebration of the Liturgy of the Eucharist, giving Communion to his family members and friends present. At the conclusion of the Mass, he offered his first blessing as a priest to the bishop. He then went outside to the church’s Sacred Heart statue to offer blessings to parishioners.

“I’m filled with gratitude to God and to the many, many people who have supported and prayed for me during over the course of my formation, including my family, longtime friends, seminary classmates and formators, priests, parishioners, and strangers,” Father Boucher said. “There’s also a strong feeling of humility as I am ordained for the service of God and his people, knowing that without him, I can do nothing.”

His first service to God’s people will as a parochial vicar at St. Matthew Parish in Limerick and St. Thérèse of Lisieux Parish in Sanford, where he had been serving when still a deacon.